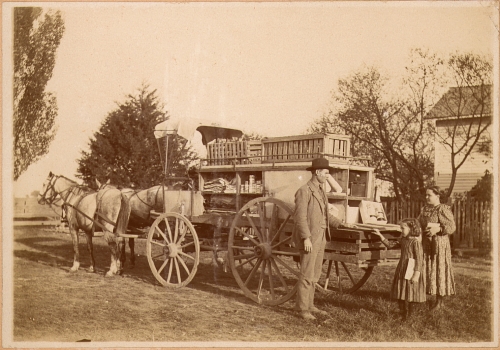 We are living in a ‘throw away’ society – a society where it is more likely than not that it is cheaper to buy a ‘new’ item rather than have the ‘old’ one repaired. Vehicles involved in accidents are regularly ‘written-off’ by the insurance companies as being ‘uneconomical to repair’.

You also have the cheap shops selling throw away toys and various other items. Over here in London they are called ‘Pound Shops’ – everything priced at £1 or less. I sometimes have a walk around those shops and I can honestly say that they have everything imaginable. Cheap and nasty but the premises are always packed.

It was not always so and I am not talking of ancient times…….

Throughout my life not only in Ireland, but also here in London, up to about thirty years ago, it was common to see various types of travelers who specialized in repairing various broken everyday items. They did such things as sharpening scissors and knives, repairing metal containers, repairing umbrellas, selling all sorts of odds and ends and could turn their hand to any repair imaginable. Much has changed over the passing years and I doubt if I have seen any such people for, as I say, about thirty years.

The ‘tinkers’ in the old days would repair all types of metal containers be they kettles, pots and pans, buckets, portable bathtubs etc. Nowadays the men spend most of their time wheeling and dealing in horses for the Continental meat market whilst driving around in their 4 X 4’s. Their women and children, who used to tell fortunes or sell ‘lucky bunches of heather’, are now more often seen ‘begging’.

There was an old Music Hall song ‘Any Umbrellas, any umbrellas, to mend today’. It was based on true characters who did indeed travel around calling out and repairing any broken umbrellas. Nowadays you can buy a new one for next to nothing.

The ‘French Onion Man’ was seen up to quite recently. He used to wear a beret, a hooped blue and white tee shirt and ride a bicycle on which he would carry hundreds of strings of large onions. He had his regular customers and many of the sellers in fact were not French at all but pretended to be so.

I have not seen a Pedlar for many, many years but he was the one who walked from town to town selling his wares. Many Sikh Indians did this in the fifties and sixties. They had beautiful silk scarves, handkerchiefs and cheap jewelry.

If a Pedlar had means of transport, be it a horse and cart or in fact a donkey and cart, they became ‘Hawkers‘ and were in fact the upper class Pedlars. They carried larger items and more stock. The distinction was that ‘pedlars’ went from town to town by foot.

Regularly I used to see the ‘sharpener’ who had a weird looking contraption, which had a circular stone and other bits and pieces. He would sharpen anything including scissors, knives, garden tools and such.

I well remember the ‘Rag and Bone’ men. They would come around with their horse and cart and give small items for old clothing. I never knew why they had the ‘bone’ in their name as I never knew them to take bones. Oddly enough, their call was always the same ‘Any old Rags, Bones or Bottles?’ Some of my deepest memories of the ‘Totter’ – a London name for Rag and Bone men – were the ‘gifts’ they gave to children for their rags etc. A goldfish in a clear plastic bag was one but much to my horror were the balloons given – always riddled with holes.

Most of these ‘traders’ needed ‘Pedlar’s Certificates’ which were issued by the police in the area where they ‘worked’. As a police officer one was supposed to check them when seen but I, and no other officer that I knew, ever saw one.

There is one modern version that encompasses the whole outfit. We call them ‘Skippers’ and they patrol the streets in their vans especially at night rummaging through the builders skips and taking anything of any use such as scrap metal, bricks and timber. Their trade is known as ‘Skippering’……

They were all characters – especially the old knife sharpeners….

Mike-We have forgotten what it’s like not to throw things away, it wasn’t always so…

Expansionism and the New American Ugly – Part I Nicaragua

Fundies in the Voting Booth…