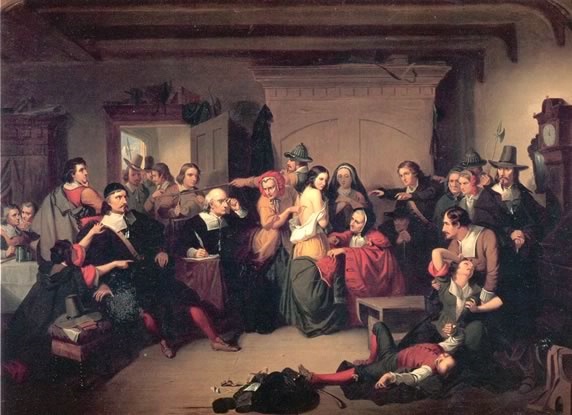 By: Mike
Which Witches?

It is highly likely that if you were to ask any person on either side of the Atlantic to name an area where witches were prosecuted and executed the answer would surely be ‘Salem’. However, it might surprise you to learn that the trials at Salam were without any doubt based on previous trials in and around Warboys in Cambridgeshire, north of London, England.

The Salem Trials – there were in fact several – were held between February 1692 and May 1693 in Essex, Suffolk and Middlesex Counties of Massachusetts. It is more than coincidence that the English counties of Essex, Suffolk and Middlesex surround Cambridgeshire in England. It is also highly likely that immigrants to America came from these areas of England and brought with them the fear of witches and witchcraft.

I live on the outskirts of London on the Essex border and it was at Chelmsford the county town where the first of many trials of witches took place. The searching out of witches spread like wildfire and commenced a sequence of events that resulted in literally thousands of innocent and most likely mentally deficient old women being sent to their death by hanging or drowning, firstly in England and later in America.

Essex holds the unholy distinction of having hanged more witches than any other county in England. Between 1566 and 1645 more than ninety ‘witches’ were convicted on the most ridiculous and flimsy evidence. On one day alone, nineteen women were sent to their death. Most were convicted on the fact that they were merely senile, elderly and poor country village people.

Were the known facts so pitiful and tragic it would to our modern thinking be quite laughable although not funny in any sense of the word.

Three women were hanged together in 1589 on the most absurd evidence as will be seen. One confessed to sending a ferret which she called ‘Bid’ to bring about the death of a child who had annoyed her. An eighty-year old woman and her daughter admitted to ‘consorting with familiars’ and to have sent a pair of frogs called Jack and Jill to knock over firewood and bewitch cattle. There was no appeals system in those days and they were hanged within hours of having been convicted.

The first known trial was that of Agnes Waterhouse in 1566 when she was convicted on her own confession and the evidence of a twelve-year old girl. It was claimed that she sent her cat ‘Satan’ which was supposed to have an ape’s head and horns to ‘spoil butter’. She was also alleged to have sent the cat to kill a neighbour’s livestock. Furthermore, it was claimed that the cat killed a man. In return for doing these deeds the cat supposedly received drops of Agnes’ blood. In court it was alleged that the spots on the woman’s face were from where the cat sucked the drops of blood.

Finally, and probably the true reason for her death, was the fact that she could only recite her prayers in Latin. This would suggest that she was in reality a Catholic in not only a Protestant county, but also a Protestant Kingdom. It was also a criminal act to practice Catholicism. Her own daughter, who was charged with her, saved her own skin by giving evidence against her mother. Agnes was hanged shortly after the short ‘trial’.

The following case suggests that anyone who upset a person of importance could expect to stand trial on the flimsiest of evidence. In November 1589 when Jane Throckmorton, the 10 year old daughter of a prosperous local family became ill suffering from bouts of sneezing and fits a local neighbour, Alice Samuel, visited her. Jane took a great dislike to this woman and accused her of causing her illness. Jane’s four sisters and some of the servants began to show signs of a similar illness and all of them accused Alice Samuel of causing their problems.

Robert Throckmorton the girl’s father was connected to people in high placed and one of his friends was Sir Henry Cromwell one of the wealthiest men in England. In March 1590, Lady Cromwell visited Warboys. She was later to become the grandmother of the future infamous Lord Protector of England, Oliver Cromwell – curse and spit at the mention of his name.

On hearing the story from the children and servants she immediately accused Alice Samuel of being a ‘witch’ and causing the illness. They argued and during the course of it, Lady Cromwell grabbed a pair of scissors and cut a lock of Alice’s hair. This she gave to Mrs. Throckmorton to burn – it appears that this was a folk remedy to ward off a witch’s spell.

Alice Samuel was rightly insulted and was quoted as saying: “Madam, why do you use me thus? I never did you any harm as yet”. These two words would be the ruin of Alice later on as you will see. On her return home, Lady Cromwell had nightmares that night, became ill and died in 1592.

Taunts and accusations began to be hurled at Alice as a result of the death but soon things began to quieten down. It was not until the local parson came onto the scene. He convinced Alice to confess that she was a witch and she in fact did so. She retracted her statement the next day but it was too late. The parson reported the fact and she was taken before the Bishop of Lincoln. She was totally overawed at her appearance but again admitted that she was a witch. There is little doubt that some form of torture, be it mental or physical was used to gain the admission be it true or false. She was imprisoned in Huntingdon with her daughter and husband.

On 5th April 1593 they were tried for the murder by witchcraft of Lady Cromwell and were found guilty. Her words to Lady Cromwell that included ‘as yet’ were used to great effect against her at the trial. During her ordeal she became demented and continually spoke of her ‘poor dun chickens’ which was taken as a reference to her ‘familiars’ or animal assistants in spells. Within days all three were hanged.

Sir Henry Cromwell confiscated what little property the Samuels had and used it for an annual sermon against witchcraft in the locality. This continued until 1812 when the belief in witchcraft had at last disappeared.

These were by no means the only Witches Trials that took place around this time in England. In those days, one did not have to murder one’s enemy – it was enough to provide a little evidence of witchcraft and the ‘Law’ would do the necessary for you.

In fact, trials were expensive so a cheaper means of testing whether or not a woman was a witch was devised. The accused would have her thumbs tied to the opposite big toes and thrown into a local river. If they sank and drowned they were innocent. If they floated they were witches, taken out and hanged.

At the height of the ‘witch hunt’, many unsavoury characters realised that there was big money to be made out of it. One Matthew Hopkins, aged 24, whilst travelling in Essex in March 1644, claimed to have heard a group of women in a small town discussing their meetings with the Devil. As a result, nineteen ‘witches’ were arrested and confessions obtained by force. They were tried convicted and hanged on the same day.

Although not appointed by Parliament, he gave himself the title of ‘Witch-finder General’ and began searching the surrounding counties for witches. He formed a team including female assistants and they were all paid well for their ‘work’.

Not only did he use the ‘swimming test’ with the thumbs and big toes tied together but also the use of ‘witch prickers’. That was where the accused was pricked with knives and needles looking for the ‘Devil’s Mark’ – a part of the body that was supposed to be dead to all feeling and would not bleed.

Tradition claims, and I hope it is true, that some disgruntled villagers finally subjected Hopkins to his own ‘swimming test’ and he drowned. He was only 27 when he died. However, Parish records at Manningtree in Essex records his burial in August of 1647 which states that he died possibly from tuberculosis.

It is ironic that forty-five years later, the infamous Salem trials began after all the killings of undoubtedly innocent old and senile poor women who had been treated so cruelly throughout the years in the ‘original’ Essex and surrounding counties…

Mike- Were the known facts so pitiful and tragic it would to our modern thinking be quite laughable although not funny in any sense of the word.

The Tears of a Clown