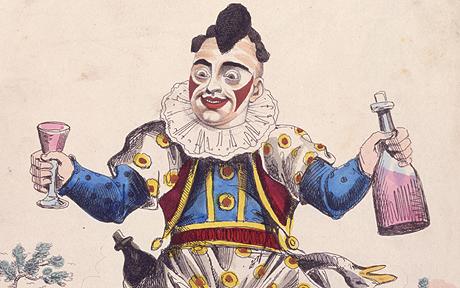 When the young man went to his doctor suffering from ‘sadness and depression’ the doctor cheerfully told him: “Why don’t you do something happy, like going to see Joseph Grimaldi the clown?” The young man bowed his head and murmured “Ah, but Doctor – I am Grimaldi”….

It is a truly sad fact that what appears to be a majority of comedians suffer (or have suffered) from what was then known as ‘manic depression’ but now more widely known as ‘bipolar disorder’. The list shown in Wiki appears endless. It is thought that ‘genius’, in the sense of creative talent, pushes a great many to, and sometimes over the edge and into an abyss from which they find themselves unable to escape.

Joseph Grimaldi, who became known as the King of all the Clowns, was a typical example. He is said to have perfected the art and raised it to a higher form.

Although I vaguely knew his name it was not until I received a memo at King’s Cross Road Police Station asking me to ‘keep an eye’ on a small parade which would arrive and visit a small local park. I noticed that the park was entitled ‘Joseph Grimaldi Park’ and is situated on Pentonville Road Islington close to ‘The Angel’.

After a few minutes I was greatly surprised to see several marchers dressed as clowns with full costumes and make-up. It was very good humoured and a pleasure to be there. We entered the park and it was then I first saw the grave of Grimaldi in the corner. After a few prayers the group broke up and departed.

I discovered that annually on the first Sunday in February, a service is held for Grimaldi at Holy Trinity Church in Dalston North London where clowns from all over the country, Europe and other distant places gather to celebrate the great man.

He was born in London on 18th December, 1778 of an English mother and Italian Father. Both parents and indeed his grandparents were in the entertainment field and playing the numerous Music Halls (Vaudeville) of the day. At the age of nine his father died and Joseph began to earn a living to support his mother. He had already appeared on stage at the age of two years at Drury Lane and at the age of three he regularly appeared at Saddler’s Wells Theatre.

He very soon earned the title of ‘the most celebrated of English Clowns’ and although everything on the surface appeared wonderful, his life in fact was full of sadness. His wife died in childbirth after eighteen months of marriage and his son, who also became a clown, drank himself to death at the age of thirty.

It seems that the only happy moments he had were when he was on stage. He buried himself in his chosen profession – Master Clown. Until his arrival on the scene, typical clowns were portrayed as fools and country bumpkins but Joseph rose to the occasion. As I said, he raised clowning to an ‘art form’. He was possibly the major star of his day. He introduced audience participation into his act usually leaving the audience to finish the last line of one of his jokes or songs. He appeared in many pantomime shows throughout London for which he was placed on an even higher pedestal.

He became very adept at caricaturing important figures including politicians and royalty which sometimes was even too deep to be recognized by the people he was imitating. However, when the caricature was recognizable it was always accepted in good humour.

As a result of his over-exertions on stage over the years, he suffered severely from fatigue and ill health and he was forced to retire. He was fifty years old, unable to work, almost crippled and unable to walk, with no money left. When word got around of his plight, benefit nights were held at the largest theatres where he had performed. He was also granted a pension of 100 pounds per annum from the Drury Lane Theatrical Fund.

He spent most of his time during his last years at a local tavern, the Cornwallis in Pentonville where the landlord would at the end of the evening carry him home to his lodgings. On the night of 31st May 1837 he died. An obituary in the London Illustrated News said “Grimaldi is dead and hath left no peer. We fear with him the spirit of pantomime has disappeared”.

The two volumes of his ‘Memoirs’ were edited by another local hero, none other than the novelist Charles Dickens and were published in 1838.

And so you have it. On that cold February morning in 1988 I was first introduced to the fame of that fascinating man, Joseph Grimaldi. It was indeed my pleasure…

5 thoughts on “The Tears of a Clown”