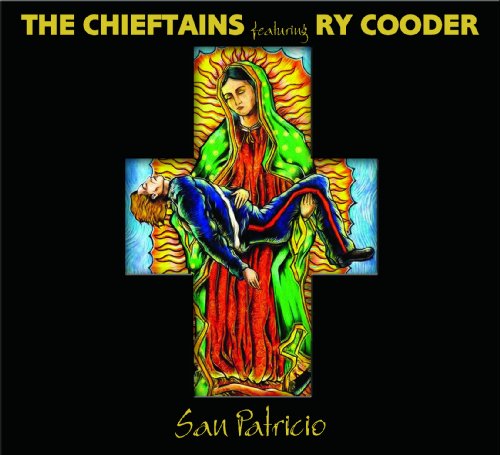 Editor’s Note:  This article originally was published in May 2010, but we thought it seemed timely to bring it back for St. Paddy’s day.  Enjoy!

The world renowned music ensemble The Chieftains have entertained regaled and educated with their music for 48 years. They have won Grammys and an Emmy.  They are on Celtic playlists all over the world.   Their newest project while left of center and unexpected for many, follows their bard-ish tradition of bringing lost stories to the masses.

Building from their Celtic roots and combining with traditional Mexican harmonies may sound more like an outrageous amount of din, however somehow they make it work.  Admittedly it is a little bit busy at first but it soon grows on you as you begin to pick up the thread of the story.

The San Patricios, an almost forgotten part of Mexican and American history.  In 1846 Irish immigrants were conscripted into the U.S. army to fight against Mexico in the Mexican/American war.   Generally poorly treated by the United States citizenry and bearing no love for the Yankees themselves, the Irish soldiers decided it was sinful to fight against their fellow Catholics.  They deserted and joined with the Mexicans and battled against the United States.

As we all know, the outcome of this war; Mexico was pushed back in Texas and ended up conceding California as well.  But it was the incredible joining of two very different cultures that makes such a good story.

Indeed if you listen closely enough you can find the Celt in Mexican music, you will find concertinas, accordions and Celtic rhythms in their polka.

But how did a band of Irish soldiers find themselves deserting the U.S. Army?   The Mexican Government had assiduously been urging all of doubtful loyalty or otherwise disaffected “to abandon their unholy cause and become peaceful Mexican citizens.” Bounties and land grants of 320 acres, rising with the deserter’s rank, were promised rewards. Impetus was added by harsh discipline in units of the U.S. Army where flogging was legal. Riley, like many other Irishmen, may well have been irked by the strong anti-Irish sentiment then prevalent in the United States.

These deserters weren’t met with immediate trust by the Mexican people themselves.  Often slandered it wasn’t until they went to battle and proved themselves that they were treated with respect.

The San Patricios also were called the Colorados or “Red Company” because many of them were redheaded. They carried a banner blazoned on one side with a figure of St. Patrick and on the other with a harp and the arms of Mexico.

It was on the second day of the Battle of Padierna or Contreras, August 20, 1847, that the San Patricios made their last stand, betrayed by former comrades committing espionage, the U.S  calvary was ready for them.

Churubusco, derived from an Aztec word meaning Place of the War God, justified its name that day. Riley’s gunners, mainstay of the defense of the bridgehead to the massive-walled Convent of San Pablo, served their pieces with battle fury well recognized in the Celts. American losses equaled 137 killed, 879 wounded and 40 missing.

During the storming of the convent, which Santa Anna ordered held to the last to cover his retreat, the San Patricios fought with the utmost desperation. There was no thought of surrender among men who faced death for treason. At last Riley and his remaining men, their ammunition exhausted, were overpowered. Seventy-five survived out of a battalion of 260; the rest, except for some who escaped, lay dead in the uniform of Mexico.

Along with fellow Grammy winner Ry Cooder , Lila Downs, The Folklorists, South of the border favorite Linda Ronstandt, Los Cenzontentles, Carlos Nunez, Los Campros de Valles,Moya Brenan,Chavela Vargas,Mariachi Santa Fe de Jesus, Lost Tigres de Noche;  The Chieftains set about to tell this tale from a south of the border perspective.  With Music and Spoken word they bring to a new generation a story that without telling would probably be lost, particularly in these times when Mexicans and Mexican Americans are facing such harsh defamation.

The music is both hopeful and melancholy.  Featuring battle songs like “March to Battle” which speaks of their resolve matched with funerary songs like “Lullaby for the Dead” it reminds us that the ending of this story is sacrifice.

But oh with what joy this sacrifice is made, for in true subversion did the San Patricios fight for what they knew in their hearts to be right.

It is especially heartwarming in this time of persecution against the Mexican people in our country to see that the Chieftains are honoring this memory of a partnership nearly forgotten, not taught in our schools.  One can almost see the ghosts of the fallen smile.

By: Grainne Rhuad- An almost forgotten piece of history is brought to remembrance through the musical talents of The Chieftains and friends.

No Snowflake In An Avalanche-A Book Review

What’s With All The Heroics?