Beware, Californians: The Republican Electoral Circus is Coming to Town 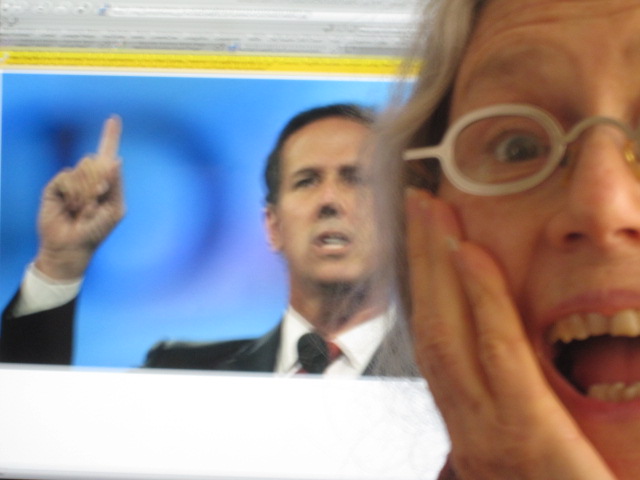 Now that my state is about to be invaded by the Republican circus, the only advice I can offer California voters right now is, “Shelter in place!” But as the GOP electoral freak show prepares to hit the Golden State really hard between now and our June 5 primary election, there is clearly going to be no place to hide.

Not only are we here in California going to have to endure the same electoral horrors that Ohio, New Hampshire, Indiana, etc. have already been forced to suffer through, but, because of California’s crucial role in choosing a final Repub candidate in Tampa, there’s going to be even more of that sideshow kind of creepiness here.

Imagine sitting down to relax and spend a peaceful evening watching “Survivor” or “Dancing With the Stars” after a long hard day at work — and having to suffer through thousands of commercials featuring Rick Santorum and Mitt Romney instead.

Two important political factors are converging here right now, both of them portending extremely bad news for us Californians. First, it seems that California’s electoral votes are going to be crucial to the outcome of the 2012 Republican presidential convention in Tampa — and whoever wins California could very well take the entire GOP nomination.

According to the San Francisco Chronicle, “The failure of any candidate to take command of the campaign makes it increasingly likely that the state’s June 5 primary and its 172 delegates will be fiercely contested.” http://www.sfgate.com/cgi-bin/article.cgi?f=/c/a/2012/03/07/MNLG1NHGJM.DTL

Second, after the Supreme Court passed that traitorous and cheezy Citizens United decision that allows corporatist SuperPacs to spend billions on campaign ads, we are gonna be literally swamped, drowned, assaulted and bombarded with thousands of in-your-face commercials of Romney and Rick saying really stupid things. And this blatant dark carnival will continue to pour mercilessly into our living rooms night and day for months. Ugh!

Duck and cover, California. We are in for it now.

“Gag me with a spoon,” as one Valley Girl was recently heard to say. You’ve got that right.

PS: I’ve finally given up on trying to persuade hard-core right-wing Fox News fans that they are working against their own best interests when they vote for Republican candidates — and even many of the Democrats’ candidates too. Let them all slit their own throats. Fine with me. Just don’t be getting your blood all over MY carpet.

Americans these days are actually willingly voting for every single One Percent/Wall Street/AIPAC candidate that they can get their hands on. That’s insane. The Middle East horror-show War for Oil and the nightmare War for Drugs and the sadistic War on Jobs, Infrastructure and Education are all being happily supported by actual American voters. That’s just crazy. You might as well vote yourself into the cemetery and be done with it.

What to do? Here’s a good idea. Let’s divide America into two basic groups: The rational/sane group — and Fox News viewers. Then let’s move all FNVs into the Deep South, Texas and Indiana so that they can form their own nation — and leave the rest of us in peace.

“But, Jane, you can’t do that!” the FNVs might say. And why not? Could it be because the rest of us are now paying through our teeth for all those pork-barrels, entitlements and earmarks that are currently keeping Republican states afloat?

Let the new FNV nation see how far it can get if it alone is responsible for paying for all those earmarks that FNVers now receive from the rest of us, as well as now having to actually pay for all those banksters bailouts and useless, brutal and unnecessary Middle East wars that Repubs seem to love so much. You love them? Then YOU pay for them.

And we can even move Wall Street to Dallas!

PPS: The Republicans are once again offering to solve the national economic crisis by not taxing the rich and by continuing to subsidize oil companies despite their record-breaking new profits. However, California could easily solve its budgetary crisis in less than a New York minute by following Alaska’s example and placing an oil tax on all that black gold that is currently pouring out of our wells untaxed. End of problem. Never gonna happen. Thanks for nothing, Republicans.

Jane Stillwater- As the GOP electoral freak show prepares to hit the Golden State really hard between now and our June 5 primary election, there is clearly going to be no place to hide.