Sweeping Over The Edge 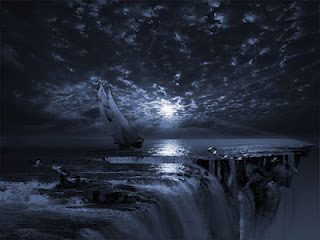 Never in a million years (if I may use that overused line) would I have believed what I’m seeing in American politics today.From nowhere, Rick Santorum has come within an ace of the #1 spot in the Republican primary race-to-the-bottom.  As impossible as it might sound, Santorum’s brand of ultraRight swagger and Fundie bullshit has garnered him several caucus and primary wins.   Next week, there’s a ‘do or die’ primary in Mitt Romney’s home-state of Michigan; while Romney was leading in double-digits as recently as ten days ago, the race is now literally too close to call.I have no analysis for this.  Examining this process is like viewing a new strain of Ebola under the microscope; something which is at once deadly and untreatable, and for which none of the old rules apply.

These events are only understandable if we look at the history of the thing.

In his landmark book, “Republican Gomorrah – Inside The Movement Which Shattered the Party”, Max Blumenthal analyzes the repressed nature of Fundamentalism – from people like Ted Haggard, who preached homophobia and hate, and was later caught with a male prostitute, to people like Sarah Palin, James Dobson, and many others who’ve led a hate and resentment-loaded revolution of sorts in America, feeding on the fear of the uneducated.  The fact of the matter is that the Republican party didn’t magically go around-the-bend; in fact, that ship sailed long ago – the Republicans have been the political arm of the Fundamentalist movement in America for at least twenty years.

It’s education which really matters here, and if Santorum is to be believed when he says that “…public schools are the tools of Satan….”, he is, in truth, pointing out the seminal fear of most Fundamentalists:  An educated populace.

The ability to engage in critical, objective thought is the main enemy of Fundamentalism , whether here in America or elsewhere in the world.  It’s not by happenstance that ‘Teabonics’ (the new language created from the collective abysmal grammar and spelling on countless placards, signs and banners at Tea Party rallies) had its start not with liberal protests, but conservative rallies.  It’s not by chance that the majority of these people live in rural America, and are economically marginalized.  It’s not a coincidence that the Republican hierarchy plays to this, feeding the religiously-driven fears of militant Islam (Santorum recently stated that  ‘bombing Iran was a good idea’), homophobia and anti-abortion rhetoric.

Santorum’s dismissive theology (“…Obama is not a ‘true Christian’….”); his adherence to Dominionist tenets (his recent speech at CPAC outlined his belief that America is a ‘Christian nation’, and that our rights are not guaranteed by our Constitution, but are ‘derived from God’) is a narrow worldview in which he is the true arbiter of religion in America – one that he’d cheerfully impose on the rest of us.

The big wildcard in Santorum’s acceptance are those voters who consider themselves ‘independent’.  It’s becoming clearer as this campaign season wears on that these ‘independent’ voters – many of whom voted for Obama in the last election – have shifted significantly to the far Right.  These Republicans-by-default have the power to swing the election, and increasingly they’re voting not for a candidate, but for an ideology.

Santorum considers the Enlightenment to be evil.  He views Jefferson with disdain, and has no problem telling the world of this.  Instead, he’d implement the teachings of the Catholic church (at least where women are concerned); he’d also do away with the notion of learning anything from science, either (he called the concept of global climate-change ‘a form of theology.’)

He’d not only relegate science to the back burner – he’d actually promote ignorance.  Home-schooling is America’s future – because it allows parents to teach their children that the earth is 6,000 years old, and that dinosaurs lived at the same time as humans.

Santorum’s Mein Kampf-like blueprint for a future America mirrors his values.  In this, he mirrors the Republican party – a dangerous organization which was co-opted long ago by extremist elements.

America will survive a Santorum candidacy.  The Republican Party, however, cannot.

A Santorum presidency?   I imagine the Empire will survive that, too, in some fashion.  That sound you hear?  It’s the deep rush of water; thrumming through the hull of the Ship of State, as we sweep close to the edge.   Reality is a bitch; the hit-woman of the cosmos, and our very own date with her is coming up damn soon.  We can no longer call ‘bullshit’ on our own lies; we no longer hold ourselves accountable. We’d sooner (at least, most of us) blame it all on a disembodied creature called ‘Satan’, when things go wrong.  Small wonder a sanctimonious asshole like Santorum can hold the attention of so many of America’s illiterati.  It appears, at least today, that they outnumber The Rest of Us.

When the whole thing goes over the falls, it’ll be a hell of a show.

But I don’t want to be around to watch.

W.D. Noble- Will Rick Santorum and those who back him finally spin the Republican Party completely out of control?

The Renewable Enemy of Big Oil