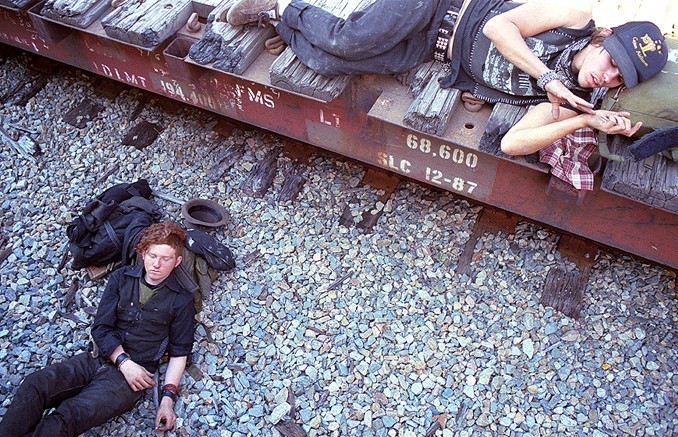 I’ve noticed a tendency of many college-aged kids to admire a new form of the hobo lifestyle, called neo hoboism. You don’t know what this is? Let me explain.

A Neo-hobo is a person around the ages of 16 and into their late 20s. They feel a sense of disillusionment with the character of society today and its traditions. They have favorable a view of our nation’s past hobos, idolizing the hobo’s ability to shirk society and its traditions to live a vagabond lifestyle of busking, sleeping out under the stars, and cooking over a campfire.

These people think of themselves as “starting a renaissance” and “survivalists” when they give up a home and adopt homelessness within the confines of having some form of “neo-romanticism.” with homelessness.

In the article, New Hobos or Neo-Romantic Fantasy? Urban Ethnography beyond the Neoliberal Disconnect, Teresa Gowen says they take up an “anomalous social space within the field of homelessness in San Francisco…”

…that of “pro” recyclers, homeless men who spend much of their time collecting recyclables for redemption. Unlike the panhandlers, broken shelter-dwellers and small-time hustlers of San Francisco’s Tenderloin and other skid row zones, the recyclers orient much of their existence around work. By working within a unique economic niche provided by the state-supported recycling industry, and by drawing on support from sympathetic residents and advocates, the recyclers create an unusual homeless subculture which, as they themselves argue, has more than a little in common with the hobo jungles of the late 19th and early 20th centuries.

She goes on to assert that these people represent “very real concerns with morality and ethics among poor people themselves.”

The recyclers’ concerns with mutual respect and the pleasures of labor represent not post hoc justifications of desperate survival strategies, but a dogged, often passionate collective effort to create a truly different experience and understanding of homelessness itself.

Here is an example of a young man who is fascinated with this new movement:

This movement has even impacted the most basic behavior of self expression through the clothing youth now purchases. The romanticism with hoboism moves into the way youth express themselves with this handbag, called a “Neo hobo” bag, by Coach; which is, oddly enough, a brand that most homeless people probably couldn’t afford. The interesting thing about this is that merchandise like this actually reinforces the traditions these people hope to distance themselves from.

What struck me in reading social attitudes about this social group was the fact that so many wondered felt homeless college kids playing the neo hobo role should be allowed to feel disillusionment with society. But, when a mature person in their forties felt the same thing, many felt (myself included) that they were in denial about the suffering they’ve endured. That they had been so stripped of human kindness and beaten so far down by the harsh realities of homelessness, that they were forming this attitude based upon the damage to their psyche.

It made me wonder if this isn’t disrespectful to these people. Why would a young man acting out his fantasy of independence as a neo hobo have an opinion any more relevant than a mature person adopting the same role?

The answer sickened me. Because, it went back to a basic attitude that seems to follow the homeless. That of people trying to help the homeless feeling they have a margin on thinking for the homeless. Frankly, I found that condescending to the older neo hobos.

Jennifer Lawson-Zepeda explores the trend towards admiration of a hobo-like lifestyle.