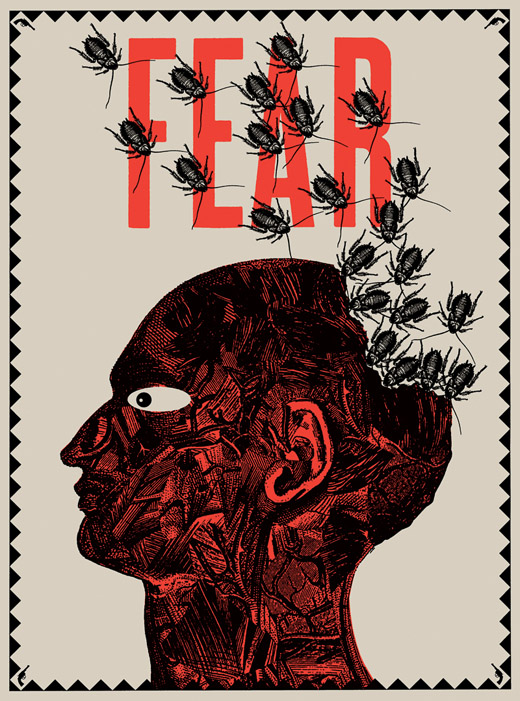 There is a thing keeping everyone’s lungs and lips locked; It is called fear and it’s seeing a great renaissance. –The Dresden Dolls, Sing

Fear, it’s one of most living beings’ great motivators.  It arouses the senses telling us to pay attention, something may be coming, and we may need to act.

There is nothing wrong with fear, base fear in and of itself.  However most living things address whatever is causing them fear.  When the rabbit escapes the fox, it ceases to be afraid.  When it dies, its compatriots do not live in fear of ever leaving the warren.  Fear and its usefulness have come to its culmination and passed.

Human beings however are different.  We like fear, or we seem to.  We gather around campfires and tell stories of Unseelie things like Balor and the Sluagh, we watch movies to elicit fear responses and a great good deal of us get our fear fix from the nightly news, streaming into our homes, our consciousness, our being without even our notice most of the time.

Unlike the rabbit that allows fear to pass, we bathe in it.  We sit about talking about dreadful things, working each other up.  Interestingly enough, more talk occurs about ‘being’ afraid than ‘doing’ anything with those fears.

When we fear things I think that we wish for them … every fear hides a wish.-David Mamet, Edmond

It often seems that we make fear our pastime.  Do we secretly wish for the things we fear to come about?  Would the actuality of our fears be as terrible as we imagine?  Or would they in fact alleviate our suffering?  Is it possible that even with the most terrifying of our fears realized that we would have the relief of never again having that fear?

Some people say yes.  There are countless behavioral interventions for those perpetually in fear that expose them to those very same fears.  Beyond that, in interviews with survivors of war, torture and abuse the people who come out the other side very often live fearless lives; they have made it to the other side of what was terrifying them.

Other people however say no.  There is evidence that people witnessing their fears, as in say a car accident or death of a loved one will fold up into themselves even further, taking that occasion as proof that every doubt they have whether reasonable or unreasonable is going to happen.

Of course the latter is correct.  Everything we fear will happen, sometime to someone.  But, should we let it destabilize us?  The rational amongst us say “no of course not.”

And yet, we destabilize ourselves every day.  Purposefully, by constantly watching, talking about and thinking about everything that is wrong in the world.  By putting such a great amount of energy into the fears of the day, we are to a great extent missing the things that would normally balance out such fears.

No passion so effectually robs the mind of all its powers of acting and reasoning as fear.-Edmund Burke, On the Sublime and Beautiful

Is fear in fact a passion?  Sometimes it seems so.  There are a good many people who make it their business to seek out and find things that are fear inducing in order to share them with the world.  You see this on news-like shows.  In comedy, on the internet with your friend postings.  The effect is the same:  “Here is something you should be afraid of.”  Almost never with a suggested solution.  This lack of solution runs counter to the very biological function of fear.  Fear is supposed to kick in to jumpstart our bodies into responding.  But, when we are exposed to fears that are seemingly insurmountable, with no discussion further than, “Yes that is fucking crazy and I am afraid.”  All of the fear is backed up with no action in sight to help us realign ourselves.  This creates in us an exacerbated state of stress.  How on earth can we combat all these things?

What is typically seen are people following up discussions like these with comments like, “Time to throw in the towel.” And, “Time to run away.”  This also instills fear into people.  How on earth are they going to manage that?

This brings us to the next bit.

Fear is the enemy of logic.

Frank Sinatra said it in The Way You Wear Your Hat but he’s not the only one.  When we are reacting in a fear based moment, we are making decisions based on preservation, but not logic.  We are not taking time to think things through and make a real and concerted difference.

The big question is why are we not spending more time dispelling fear?  Why are we not instead empowering each other?

It’s easy to blame all of our fear mongering on recent events like 9/11 and the resultant color coded terror scales we suffered through, which thankfully have been retired for now; as well as the constant ticker tape news updates which seems unlikely to go away.  However, it would be unfair to lay all of this at this particular door.

Since the advent of WWI people in the States and Europe have been afraid.  Initially this fear found outlet in an emerging art source: DADA, which on the surface non-sensical was indeed trying to make sense of the extreme shock and fear dealt out by a new type of war.

Humans being humans however; did not stick with the “let’s do something with our feelings,” route, and instead decided almost across the board to beef up on ammunition and war machines, further illustrating when people are afraid it’s easy to make them more afraid and control them.

We still are seeing the effects of this today.  Our fear caused the most recent war in Iraq. Saddam  Hussein obviously had no nuclear weapons.  There was absolutely no evidence of it, and yet our fear of him wielding it was enough for us to universally put a stamp of approval on an invasion.  We almost did the same in North Korea.  Who knows, we may still do so, we have spy submarines off the coast listening in fear to them right now.

If we were thinking with our logical minds we would wait and work with others.  A prime example is the situation in the West Bank.  Logic dictates that no matter how we feel about the “Holy Land”, people were there before the state of Israel was created and no plan was made for any of them.  Thus, logically we are all to blame for the ugly state of affairs and poor treatment of Palestinians.

But we don’t see it that way, because we are afraid.  Afraid of pissing of Israel whose pockets are helpful to us; afraid of the unrest recombining will cause; afraid of Asiatic dark people; and most of all afraid of admitting the world made a huge kerffufleing mistake.

Fear has many eyes and can see things underground.-Miguel De Cervantes, Don Quixote

The character Don Quixote may have been mad, but he was imbued with the madness of a saint.  He quite succinctly pointed out that our fears very often have us seeing problems that are not there.  This is true of things great and small.  We have very often discussed at Subversify our irrational fear of Russia during the Cold War.  We currently have an irrational fear of Mexico and Mexicans whether they are citizens or not.  We fear drugs; we fear not having drugs at the very same time.  We fear a police state and we fear not being protected.

But, one thing Don Quixote also illustrated is that throwing off that fear, while it may have you tipping at windmills you think are dragons, gives you a liberation that allows you to live happily, fully and without regret and longing.  Isn’t that what we all really want?

I must not fear. Fear is the mind-killer. Fear is the little-death that brings total obliteration. I will face my fear. I will permit it to pass over me and through me. And when it has gone past I will turn the inner eye to see its path. Where the fear has gone there will be nothing. Only I will remain.-Frank Herbert, Dune

Grainne Rhuad- Fear, it’s one of most living beings’ great motivators. It arouses the senses telling us to pay attention, something may be coming, and we may need to act.