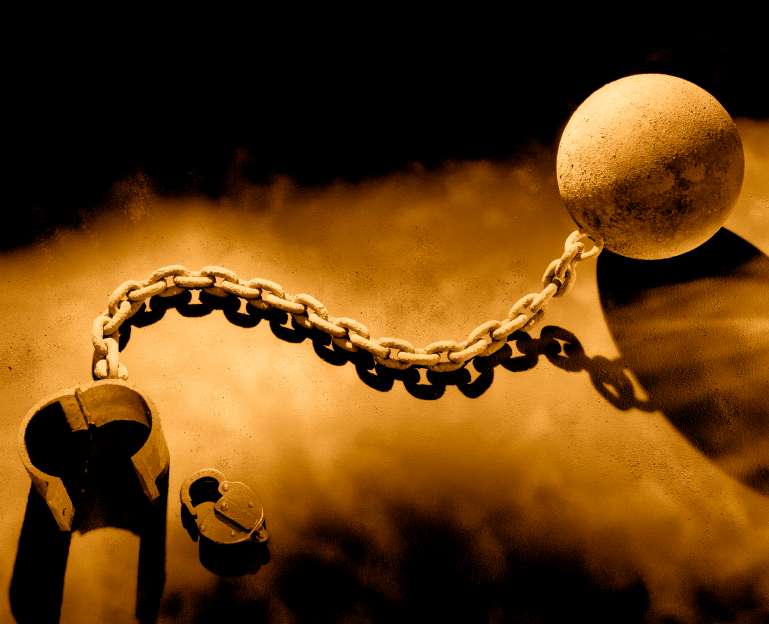 This country from the start was built on slave labor.  Before we began importing slaves we literally sold ourselves into slavery to get here. This process as most school children know is called Indenture.

The way it works is you agree to labor for a set number of years and someone with means buys your contracts and agrees to do things like pay off your debt or pay passage for you on a ship or oversee you for your prison time; something of that sort.

Very often indenture would run longer than the original agreed upon time.  Usually this was due to clauses in the contracts.  Things like failing to bring in a good enough harvest.  Getting pregnant, married, running off, not making enough in trade if you are a craftsman, breaking something, pissing off the owner of your contract.

For things like these you would be penalized with extra time working for your contract owner, at their discretion. For example they may determine their broken butter churn was worth six more months.  You didn’t have a lot of say as an indentured servant.

Indentured servitude is nothing new.  It has been around as long as civilization has.  Egyptians, Romans, Brits and Gauls all made use of it.  Children were handed over to pay household debt or a Man would conscript with an Army to keep his family in food and become a citizen.

The history classes you had in school and which children and young adults still receive tell you that this practice was done away with…oh about the time that we started practicing “real slavery” in earnest.  That is to say slavery, with no chance of paying off a debt in which people were treated as cattle.

Today’s indenture is of a more insidious sort.  There are in fact many ways in which we indenture our lives, through credit cards, business, and auto and home loans.  But what is really taking a toll on Americans young and middle aged is Student Loans.

Currently one in every five government loans that entered repayment in 1995 has gone into default. The default rate is higher for loans made to students from two-year colleges, and up to 40 percent, for those who attended for-profit institutions.

1995 is generation X, these are the people who  are now reaching their 40’s and probably figured they would have paid off, if not all at least a good chunk of their student loans by now.  And yet they’re still struggling under the weight of their education.

I remember when I signed up for my student loans.  It was in 1994 and it was my last year of college.  I had been able to do all the rest with grants and work study.  Part of the process at the time had been a ‘class’ which was really a group talking to about the dangers of loans, how important it was to keep records and make payments to your loans.  Also, should one run into trouble, do not wait on it.  It was in short a lesson in responsible lending.

Nowadays at college campuses across the country this no longer happens. Loans applications are taken electronically and the “advice” about how to determine if you need a loan is not given to you by a living breathing human, but rather a statement which you are supposed to read and sign off on.  I know I don’t even want to admit to how many electronic agreements I have signed off on without reading in full.  Stupid I know but we all do it and are at risk of becoming Human Centipads.

In addition to that, private loans are even easier to get.  All that is necessary is registration in a higher learning institution OF ANY KIND and a bank acct.  Usually your own bank will be happy to enslave you.

What’s not so easy to get anymore are Scholarships, Grants and money from your parents.  The money from your parents’ one seems obvious.  They are broke and can’t pay their own student loans.  But did you know that if your parents make over $47,000.00 Gross and they went to college you do not meet any of the criteria for Federal Grants?  Furthermore if you happen to be working and supporting yourself you still cannot use your own information to apply for grants until you are either 24 years of age or married.

Kind of makes it seem like the Federal Government doesn’t want to support any of your education doesn’t it?  It certainly seems that way to thousands of students every year who were told by their college graduate parents that college is the passport to the middle class.  Too bad they didn’t know it was a onetime passport per family and by getting their own degree their progeny would be unable to afford school without indenturing themselves to the machine.

There are currently two main sources for federal student loans — the Federal Family Educational Loan Program, or FFELP, which is being phased out, and the Federal Direct Student Loan Program, or FDSLP. The FFELP has about $390 billion in total loans outstanding –$77 billion in Stafford loans, $81 billion in unsubsidized Stafford loans, and $211 billion in consolidation loans. Then there are the loans to parents.  Yes, the same ones who can’t afford to pay off their own loans. These PLUS loans add up to $21 billion.

Add the two together, and you get to $610 billion.  This is just federal loans. These numbers don’t include private-sector student loans at all, and already they’re above the $550 billion that the Fed claimed was the total of all student loans outstanding in the country.

Here are some more scary facts about the cost of higher education:

“Thirty years ago, college was a wise, modest investment,” says Fabio Rojas, a professor of sociology at Indiana University. He studies the politics of higher education. “Now, it’s a lifetime lock-in, an albatross you can’t escape”- Huffington Post.

Many proponents of personal freedom in recent years have pointed out that it might be time to stop buying into the route of higher education.  In this way at least our up and coming generation can avoid this finance driven slavery.  Education, they point out is available for all, all one needs to do is seek it out.

This is absolutely true.

And yet our society for some reason is not ready to let go of its glorified hall pass; that little piece of paper called a degree. The thing that really shows the world, you are a good worker, can make plans and complete them; and most importantly follow rules.

Those in positions to hire employees are going to be looking for these things above experience.  As most hiring agents will tell you experience is imminently harder to verify than a college degree which is easily searchable.  Many positions that will pay well enough to pay off those huge student loans will not even look at applications that don’t include a copy of a degree or further training certificate of some sort.

Here’s some more numbers on that:

The point being that things in our economy and culture have changed to the point that we can actually begin to demonstrate an ability to exist in the “real world” with or without degrees.  Most jobs that are readily available do not require degrees, so why indenture yourself for a lottery chance at middle class when you can be absolutely free of servitude at a slightly lower class?  You may even bring home more money than your middle class neighbor due to the ridiculous amount of taxes the middle class is required to pay.

In addition you won’t be subject to the adding on of time to your indentured servitude which still happens with student loans.  Want to get married and have a baby, you get six months, and then you have to go back to work or start paying again.  If not, your loan continues to grow, thus your indentured time lengthens.  The same applies if for some reason you lose your job, or don’t make enough money.  You are owned entirely, either by the federal government or a bank or both.

In this time, the insidiousness of indenture through higher education should be something we are all willing to fight against.  Do those of us who have been to college really want our youth absolutely enslaved and controllable for the facade of academia?  Or would we rather see future generations of bright people able to make decisions based on their talents, drive and dreams without fear of not being able to meet the contract of student loans?