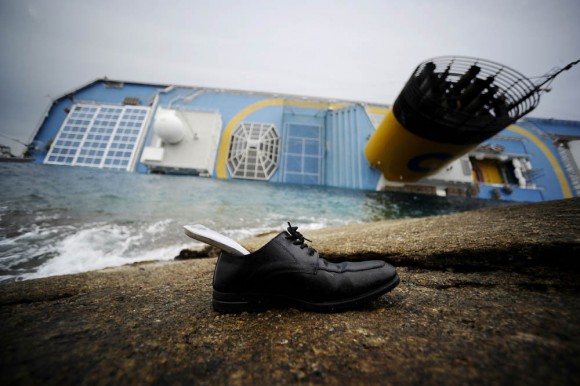 The recent disaster involving the cruise liner, ‘Costa Concorde’, off Giglio, Italy in the Mediterranean again raised the question why it is that when the Captain of a vessel gives the order ‘Abandon Ship’, it is always quickly followed by ‘Women and Children First’. It is suggested that the Captain of the Concorde ‘slipped off the deck into a lifeboat’ before all the passengers had been rescued. Before the Birkenhead protocol was in force on such occasions it was ‘Every man for himself’.

This all changed when His Majesty’s Ship Birkenhead hit a reef in South African Waters on 26th February 1852. The procedure, the ‘Birkenhead Drill’ as it quickly became known, was referred to in history as ‘the height of courageous behaviour in hopeless circumstances’. However, it was the first time ever that records show that a Captain gave the actual order, ‘Women and Children First’ and so it is remembered.

The Birkenhead was built in 1845 in Birkenhead (Liverpool) as a Navy Frigate and had steam engines that drove a pair of twenty foot paddle wheels. It also had two masts for sail when conditions were satisfactory for that mode of propulsion. She was one of the first iron-hulled ships built by the Royal Navy. However when the actual first iron ship, (Brunel’s SS Great Britain), went aground outside Dublin in November 1846, it was found to be nigh impossible to refloat her. For that reason and the fact that cannon that hit the hull could cause jagged holes that were difficult to plug, she was turned into a troopship. A further minor reason was the fact that the more efficient ‘propeller’ had been invented and made the ‘paddle’ inefficient in comparison.

In actual fact, when efforts to refloat Brunel’s Great Britain were successful in August 1847, HMS Birkenhead was used for pulling power.

In January 1852, ‘The Kaffir War’ was ongoing in South Africa and the Birkenhead left Portsmouth in the South of England carrying troops from several different regiments. It stopped at Cobh (then Queenstown) in County Cork and picked up more soldiers. Many of these were victims of the Great Famine and had joined up in order to get three meals a day.

On 23 February 1852 it arrived safely at Simonstown near Cape Town in South Africa. Most of the women and children, mainly families of officers, disembarked together with many sick soldiers. Nine cavalry horses and food for them were loaded for the next leg of their journey to Algoa Bay.

On 25th February she set sail with about 643 men, women and children aboard. The Captain had orders to make full speed to his destination. In order to do so, he decided to hug the coastline and he charted a course, which was basically three miles off shore. The sea was calm and they maintained a steady 8.5 knots. 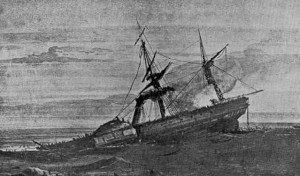 The night was clear with the ‘leadman’ taking regular depth soundings known as ‘swinging the lead’. At 2am on the 26th February, the depth reading suddenly dropped to 12 fathoms (22 metres). Before he could give a warning or take another reading, the ship struck an uncharted rock near Danger Point, Western Cape.

Apparently the rock is visible during rough weather with the rising and dropping of the waves but in calm weather it remains hidden. The initial impact tore a large hole in the forward section of the ship. However, this was an airtight compartment and would not have been disastrous albeit that it flooded an area where over 100 soldiers were sleeping in hammocks. A second impact was deathly. It ripped open the bilges in the engine room.

The surviving officers and men were assembled on deck where Lieutenant-Colonel Seton took charge of all military personnel. He stressed the necessity to maintain good order and discipline. His commands were issued and received in total silence and there was no panic. Distress rockets were fired but no answer was seen. Men were set to the pumps and others began to try to launch the lifeboats.

That was when the disaster really began to happen. Poor maintenance and hardened paint on the winches resulted in only a few of the lifeboats being launched. Two large boats with a capacity of 150 men each were among those unable to be launched. It was then that the order was given ‘Women and Children First’. The youngest soldiers in order of age took up the remaining places. The boats were then rowed away from the ship.

It was anticipated that those remaining on board would swim to the boats but Seton foresaw the danger of doing so. He believed that the boats would be swamped in such an event. He then issued the order for the men to ‘Stand Fast’. The soldiers did not move other than to release the horses into the sea in the hope that they would swim to shore – a distance estimated at two miles. The remaining soldiers continued to hold their ranks until twenty minutes after hitting the submerged rock the ship began to break up and sink. It was then that they were washed into the sea.

The waters were shark-infested and many of the men were killed. A strange fact emerged in that those who stripped off were invariably killed by the sharks whilst those who kept on some clothing managed to swim to the shore uninjured.

Of the 643 who were believed to be on board, only 193 survived. Eight of the nine horses made it safely to land. There is little or no doubt that had discipline not been maintained on board the sinking ship as ordered by Seton, and the men had swamped the lifeboats, there would have been a total disaster with few if any survivors.

Thankfully, with the Costa Concordia there have been only a small number of passengers reported drowned of the 4,229 passengers on board with about 25 still ‘missing’. It is strange however that with modern instrumentation, satellite navigation and all the other aids to a ship of her size that what has been called ‘human error’ on the part of the captain can still occur. After all the Birkenhead went down 160 years ago……………..

Mike: It was the first time ever that records show that a Captain gave the actual order, ‘Women and Children First’ and so it is remembered.