A Commanding Voice: “My Tidy List of Terrors” by Jonathan Norton 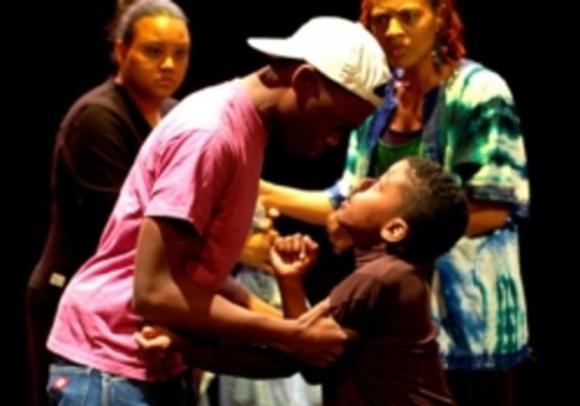 How rewarding to watch a young playwright develop his voice, talent blossoming more lucidly with each new work that he produces. Dallas needs to sit up and take notice of one such talent in the expressive, perceptive Jonathan Norton and realize we knew him when, before he moves into the national spotlight he will surely soon deserve.

The 2011 Eugene O’Neill National Playwrights Conference honored Norton as a semi-finalist in their new play competition for his full-length play My Tidy List of Terrors, and the 2011 Texas State University Black and Latino Playwrights Conference presented it in workshop format. Through January 29, Dallas audiences can see it fully staged at the South Dallas Cultural Center under the auspices of the Diaspora Performing Arts Commissioning Program, a distinguished program dedicated to supporting creative work that explores “ the multiplicity of experience present in the African world.” It’s fearless, engaging, vibrant theatre, for real.

“Ishmael Johnson was taught in church that all your sins fall on you when you turn twelve, and you can’t automatically go to heaven when you die. And when his cousin is murdered, Ishmael fears that he might be next. But the only thing standing between Ishmael and the baptismal waters is his mother, Vara….”

Set in 1980 Atlanta during the horrific Atlanta Child Murders, the play weaves threads of surreal mysticism with dramatic realism, portraying a slice of life with several families touched by and living in fear of the ongoing, unresolved murders. It opens with projections of photos of the faces of the murdered children flashed above the playing area, while a woman, Greek chorus fashion, wails their names and celebrates their short lives. Then a group of Yoruba-inspired orikis, mask-wearing “praise dancers”, surround a young boy in modern dress playing downstage and spirit him away, the next victim to be abducted and murdered. With those potent, exotic, ritualized images fresh in the audience’s minds, a working class mother and her neighbor emerge from plain, naturalistic doorways to discuss the mother’s pragmatic plans to protect her son by moving to an upper class neighborhood where she believes he will be safe. Norton leads the audience to a personal, accessible reality while establishing the epic scope of the tragedy in context; and the play isn’t even ten minutes old yet.

The mystical theme continues to haunt the work effectively, even transforming itself into belief that Christian baptism will protect a child from abduction, like a good luck charm. In the meantime, lives are changed forever, placed at risk and challenged in ways they could not have dreamed before, as the young children in the play attempt to “be kids” and define themselves independently from the fear and anxiety-driven adults. Norton has a tremendous knack for developing tangible, intriguing characters that follow clearly drawn, very human arcs.

Lower class Vara and upper class Gabby, ably portrayed by Nadine Marissa and JuneneK, offer different perspectives on how parents might cope with fear of losing a child; their conflict arises believably from the differences in their worldviews and life experiences. They struggle. They disagree. They learn. They grow. A revelation by Cousin Reva (Renee Miche’al) near the play’s end astounds with its evocative beauty and surprise recognition of the power of love to transform. What fun for actors to work with a script that provides such solidly grounded motivational building blocks?

This isn’t totally polished, finished work yet. Some scenes lack definition, particularly when the boys and the father character interact. But the other characters’ strengths and Norton’s clarity of voice and vision are so strong that the performance satisfies and illuminates a sad part of history in an unexpectedly intimate, yet epic way.

Director Cora Cordona, Teatro Dallas’ Artistic Director, keeps the scenes flowing with energy and interest and integrates the mystical with the realistic flawlessly. The South Dallas Cultural Center’s black box space supports the production well with its dark recesses and open, grid-crossed, high ceiling. The technical team of Nick Brethauer (set design), Jeff Hurst (lighting design) and Adrian Padilla (sound and lights) creates a somber environment where one can palpably sense “a world of bad spirits” lurking all around, eager to snatch an innocent child from his home without warning.

Jonathan Norton’s talent as a playwright touches on the poetic that graces the works of August Wilson or Susan Lori Parks but clearly defines his voice as uniquely his own. Come out, Dallas performing arts lovers, to witness the emerging potential. We knew him when….

My Tidy List of Terrors runs through January 29, 2012 at the South Dallas Cultural Center

For more from Alexandra Bonifield go to her website @ criticalrant.com

No Snowflake In An Avalanche-A Book Review