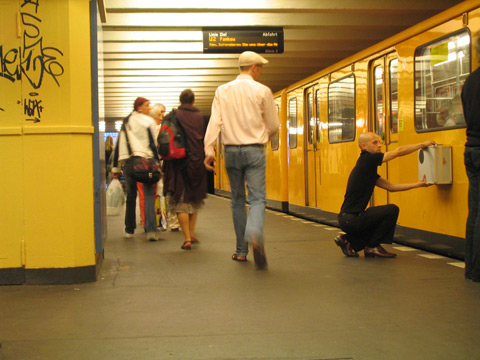 Death of a MOSSAD Agent

At Neu Koln, Berlin, when catching the subway south towards Rudow (to Britz Sud), I was standing at the underground kiosk buying breath fresheners when the train arrived. I quickly tried to complete the transaction but figured I would likely have to catch the next train. I noticed a group of young Arabs holding the door to the train open, preventing it’s departure, all (four) of them watching me; clearly it appeared as though they either expected me to catch that train or they would not be on it themselves.

The train consequently waited for me and I sprinted to the door they were holding for me and jumped between them, onboard. They let the door close as I turned 180 degrees rather than taking a seat, making them a group of five.

Standing facing them, holding a pole, all seemed surprised at my action. A shorter, darker one, then began to assail me in Arabic language as though I were expected to understand. This one initially took the lead and was most vehement and hostile, although a couple of the others were also saying quite angry things to me direct, also expecting I would understand.

I simply looked at them all, eyes moving one to the other direct, and asked, “Do you speak English?”

A tall member of the group, with light complexion on my right (all of them were facing me) and who did not become involved with the angry speech, indicated he did speak English with, “Yes.”

I asked, “What country are you from?”

His indirect answer was to point to the most hostile one, the short grubby one who was wearing an Israeli Defense Force battle fatigue shirt as though it were a trophy, and stated, “He is Palestinian.”

He made this a clear distinction. My guess was the one who’d made this statement and the two others (all taller, better dressed and with lighter complexion than the “Palestinian”) were all Hezbollah-aligned Lebanese. (There is a large Lebanese community in that area)

I said to the short, hostile one emphatically, “You’re Palestinian? I apologize to you for George Bush!”

That one statement changed everything. All of them went silent and the “Palestinian” never said another word.

I then said, “There are many good people in my country who don’t like what is happening…it is a difficult situation.”

From this moment and comment, the now totally silent (and clear outsider) “Palestinian” became the target of the Lebanese, while they checked out my reactions to their terrorizing the “Palestinian”, the focus of their hostility had shifted away from me.

What happens now is really interesting. One of the Lebanese is suddenly is getting on his cell phone and making a call… while the group’s leader, the tall one to my right, looks at me while pointing to the “Palestinian”, who is suddenly looking very ill, and says “Maybe he is Israeli,” while assessing my reaction.

I deliberately made myself look surprised and suspicious, raised one eyebrow at the ‘Palestinian’ and said “Israeli Arab?” as though I both did not fully understand and did not like the idea or somehow found it disconcerting.

The train had made a brief stop and a fifth Arab (Lebanese) joined us with a cell phone and greeting the other Lebanese but not the ‘Palestinian’ who had simply become demoralized with a now clearly frightened look. The new arrival had some conversation in Arabic with the tall one on my right, after a hand/fist greeting that, by gesture and look, was attempting to sort some things that needed sorting.

The new arrival is now on his phone while also talking to the tall one to my right, but interrupts his conversation with the tall Lebanese and asks me, “Where are you from? England?” almost as to test my veracity (his English skills would know).

Then I was asked: “Do you speak German?” and I answered, “Only a little,” whereas the tall one to my right gave an absolutely evil look at the “Palestinian” and said slowly, deliberately, “My German is VERY good.”

The new one and the tall one looked at each other, spoke again in Arabic, and then the tall one suggested to me, while rubbing the “Palestinian’s” belly, “Maybe he is a good boy for sex. What do you think?”

Now the “Palestinian” had the absolute look of I am going to die on his face as I answered emphatically, with the culturally correct “I am a good man!” and an offended look. (I wore silver studs in my ears at that time and likely had been falsely profiled to MOSSAD as gay) Suddenly the tall Lebanese, with my answer, made a violent stabbing motion with his right hand at the “Palestinian” while shouting (nearly screaming) to the new arrival, “The Israeli must be killed!!”

The Lebanese closed around the “Palestinian” with looks of shock and rage on their faces. When the train stopped they shoved him off the train together with stepping off themselves. I assure you all, the “Palestinian” did not live long after this interrogation, at most a matter of hours.

Now, I noticed the Germans on the train, men looking straight ahead, no expression; several women had looks of absolute terror on their faces, it had been that intense.

The “Palestinian” was clearly not one of the group in any sense of intimate acquaintance or typical association. He was dressed a bit shabbily, wearing the IDF olive drab fatigue jacket with a Hebrew lettered tag over the left pocket. The Lebanese were all clean, well dressed, of a better class, and obviously educated and intelligent.

The “Palestinian” had gone from initiator of the group’s hostilities towards me, to the group’s target in this course of events lasting at most 15, more likely, only 10 minutes. I expected I could have died. Clearly, the posed-as “Palestinian” MOSSAD agent had died instead.

This was a failed scheme (compromised operation) of using the phony “Palestinian”, in effect MOSSAD, attempting to dupe Hezbollah into taking someone out with a hit.

Between my survival skills employed through confronting the circumstance with dialogue, and Hezbollah’s suspicion and caution, the Israeli operative, in a sense, literally cut his own throat. He was not prepared for my direct engagement.

MOSSAD is bound to a code of conduct which requires avenging a loss. I would simply point out to the Israelis, at what price? The nature of psychology is, when you have made a mistake, that mistake must be corrected, to stay on track with a correct course of action. Otherwise, mistakes can become complications and complications can lead to making by far more serious mistakes. BIG MISTAKES.

The self-inflicted damage done, with the ensuing pursuit of myself over these past several years, has been quite significant, let me assure you. Meanwhile, I’ve mastered that most rare and peculiar art of surviving as live bait.

One question you REALLY should look at is: Did the CIA calculatedly omit the fact I had repeatedly surprised and neutralized or reversed previous operations mounted at myself, over a period easily exceeding 15 years prior to this event? By now, you should understand, clearly, numerous subsequent failures can be no accident. Had their purpose been, if you could not take me, the damage inflicted to your organization is a secondary reward, a consolation prize?

It would make much more sense to take out the anti-Semitic American team leader who’d failed the operation 11 days previous, on October 3rd, to fulfill your code’s requirements. Because you had been purposely lied to, when this hit job had been handed off to your organization.

Perusing my public information will easily identify that team leader by name.

Ronald Thomas West is author of Penucquem Speaks, ranked five stars by Howard Zinn at Amazon. A former sergeant of Operations and Intelligence for Special Forces and past Investigator for a law firm aligned with Trial Lawyers for Public Justice (Mueller Law Office, Austin, TX), Ron is co-author of the Mueller-Wilson Report with Dr Mark D Cole (International Law & Human Rights.) Briefly a lecturer at Johannes Guttenberg University, Ron is persona non-grata at the law school, after having taught a course on U.S. Constitutional Law as satire, in stand-up comedy format. A political exile and fugitive from multiple intelligence agencies since July 2007, Ron contributes the occasional analysis/exposé for Subversify Magazine from an undisclosed location in Berlin.

Ron’s satires and other works (including books Penucquem Speaks and Napi Mephisto) are free to the public at his online publishing page and he keeps a public log of current events at Facebook.

Other articles by Ronald Thomas West at Subversify:

A riveting true life encounter on a Berlin Subway by Ronald Thomas West, concerning the death of a MOSSAD agent on October 14th, 2007.