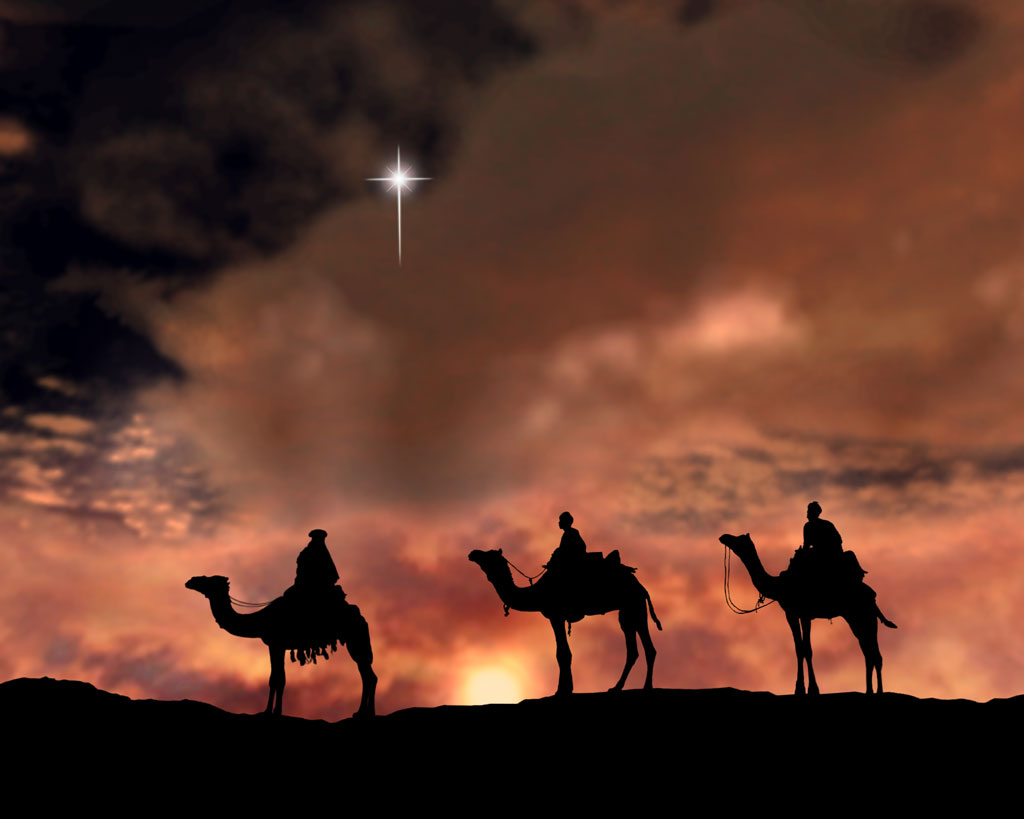 “Come Casper, please try to keep up with us” Melchior looked over to Balthasar and raised his eyes up to the heavens. “Let him be” Balthasar looked back over his shoulder and quietly said to Melchior “The signs are telling us that the time is close and that we near the place. If we camp here tonight, I have a feeling that we should be there by late tomorrow”. Melchior looked up into the evening sky and saw the star that they had been following for many months since it had first appeared in the heavens. “You could be right my friend – soon it will be so”.

Melchior was the eldest and senior of the three and the most experienced in the secret art of astrology. It was he who had first identified the mystical star that shone bright in the westerly sky and had convinced his fellow princes to partake of the journey.

Ancient stories had foretold of such a phenomenon and forecast the star’s appearance to announce that a new King of the Jews would be born under its bright light. Balthasar, who had been a student under Melchior for several years, answered the call without hesitation whilst Casper, the younger of the three by many years, reluctantly decided to join them. He was much too fond of the good life back home in the college at Saveh in the capital city of his beautiful homeland, Persia. He was in fact tired of the camel ride and homesick for his comforts……..

They erected their tent and lit a fire as the temperature dropped signalling a chilly night. “Keep yourself well wrapped up Casper” Balthasar called to his younger friend “I do not want your father and mother to claim that we did not look after you”. “Why on earth did we not bring some of our many servants with us” Casper called back “It would have made the journey all the more comfortable”.

Melchior slept badly so during the night he left the tent and went outside. In the distance he saw the bright lights of a city and from his reckoning and the parchment map he carried, he decided that it must be Jerusalem. However, he did not awaken the others to tell them the news.

Dawn broke late, it being just past the winter solstice, and he lit a fire. It was while they were having a light breakfast that he told the others about Jerusalem. Casper was delighted as it meant that he could soon sleep in a proper bed for the first time in many months. An hour later they recommenced their journey.

After several hours they rode their camels up to the gates of what was indeed a great city. When the Roman Captain of the guard heard that three ‘royal visitors‘ were about to enter the city, he called out the guard and greeted them according to their rank. News of their arrival had preceded them and they were expected. King Herod, the provincial governor, who ruled the city and surrounding lands for the Romans was delighted that he was about to be visited by such guests and instructed that they be given the best residence available and when rested they be brought straight to his palace.

An hour later, they were escorted into Herod’s private quarters. After pleasantries had been exchanged, Herod asked “And what is the nature of your travels. I have heard of your adventure and was curious to hear the reasons from your own lips”. Melchior replied with some element of surprise in his voice. “But sire, we came to partake of the celebrations”. Herod was puzzled “Celebrations?” he asked. “Yes” spoke Casper “we came to pay our respects to the one who is to be born King of the Jews”. “I know of no such event” Herod genuinely told them, “I am afraid that your journey has been in vain”. Casper showed signs of total disappointment at the thought of resuming the journey but Melchior and Balthasar merely looked at each other and said not a word.

“As you say sire” Melchior spoke softly “but with your permission we will continue to search for a little longer”. “By all means” Herod appeared puzzled “and if you find him, please send me a message that I too may pay my humble respects”. With that the three Magi left Herod, returned to their temporary residence, packed their belongings and left the city. Casper had a look of doom on his face……….

As soon as Herod had confirmation from his Captain of the guard that they had left the city, he sent an urgent message to the Jewish Chief Priest to attend promptly. When he arrived Herod came straight to the point. “Tell me what you know about a King of the Jews that has or is about to be born”. “I know of no such event having taken place sire” the Priest said. Herod then related what the three Magi had told him.

The Chief Priest hesitated then began slowly as if searching his mind for the correct text. “It is written sire, that such a one would be born of the Jews”. He again hesitated as if searching for the exact words of the ancient ones: he continued “Out of Judah will come a ruler who will be the shepherd of my people – Israel”. Herod brought his fist hard down on the table beside him and called his Captain of the guard.

“The three princes who just left, in which direction did they go?” he asked. “To the west sire” his subordinate answered. “I want you to take your fastest horse and give chase. When you find them, tell them that the place they are looking for is in the land of Judah. Tell them I will follow shortly to give praise. Have them followed to see where exactly they go and with whom they meet”. With that the Captain left.

Upon realising that they were indeed being followed and fearing what Herod might do, the three Magi changed direction and made their way by a circular route to where they were directed by the star. As evening and the darkness arrived, the star that they had been following shone brighter than any night previously. They followed and it led them to some caves on the outskirts of the village known as Bethlehem.

Melchior was the first to speak. “My friends” he said to his companions “the time is right and we are close to the one we seek. I do not understand why a King would be born in such surroundings but be that as it may, He is nearby”. They went from cave to cave which were used as shelter for animals. On looking into the final cave, they were greeted by a bright light – a light far brighter than the torch therein could possibly have provided. As they entered they saw a young woman lying on the straw close to a donkey and some chickens. A tall bearded man stood nearby whilst close-by in a basket used for feed for the animals, wrapped in white cloth, lay a child.

All three stood in silence as they looked-on in awe……..

It was Casper oddly enough who was first to make a movement. He moved over to the manger wherein lay the baby, knelt down in the straw and spoke softly. “My Lord and my God” was all he said as he was joined by his two friends. All three knelt in silence and the baby’s parents watched as the three men dressed in such finery looked down at their newborn son.

Again it was Casper who made the first move. He returned to their camels and brought forward a small trunk. He took it back into the cave and handed his friends each a small packet. He placed his own small purse beside the child. “Gold my Lord” he said “so that you may never need for anything”. Melchior produced a container of Frankincense and added “So that you may always smell like a King, my Lord”. Balthasar placed a small container of Myrrh. He quietly whispered as if to prevent the child’s parents from hearing him, “For your anointment sire, when your death comes as the stars have further foretold”.

As they continued to look at the child for quite a time, others began to arrive at the cave entrance. There were shepherds from nearby hills and fields, workers from the nearby houses and children who had been awoken by their parents to come and see the three princes in their fine robes. All stood at the entrance craning their necks to see what was happening.

“Balthasar and Casper” Melchior spoke softly “It is time to leave, our duty is done and that which the great star foretold has come to pass”. The others nodded in agreement and all three quietly left the cave.

As they began to ride their camels back in the direction of Jerusalem, they were suddenly confronted by a man dressed all in white carrying a bright torch. “Good sires” the person spoke with authority “do not return to Herod but take a different route back to your own country. For if you tell him of what you saw, he will do his utmost to kill the child and every other child of a similar age throughout the land. Do not speak of what you saw this night. Now go in peace”…………….

The three Magi were indeed wise men – they did as they were asked by the stranger and although Herod was furious when he discovered what they had done, the baby known as Jesus survived by escaping with his parents to a distant safe land……….

Mike- It was Melchior who had first identified the mystical star and had convinced his fellow princes to partake of the journey.