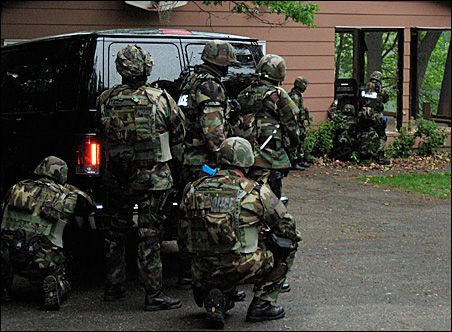 I really hate to disappoint anyone who thought that the state of affairs might turn for the better now, but the truth is that things are going to get much rougher in the near future – as of now, Congress has introduced legislation in the so-called “defense authorization bill” (as though the U.S./NATO empire has ever defended anything but its own pocket book…) that would allow for its own citizens to be indefinitely detained on its own home soil (see this for more: http://www.washingtonsblog.com/2011/12/americans-are-military-targets-in-the-war-on-terror.html ).

The state claims that this bill simply codifies precedent (which is a terrible argument in the first place since the existing precedent favors the build-up of a powerful police state), but the reality is that the state is declaring its own territory a war zone and granting “battlefield authority” to the chief executive of this pseudo-republic – essentially the passage of this bill would end all pretense of “democracy” that the state has hid behind for centuries and reveal the citizen for what he truly is: a slave. 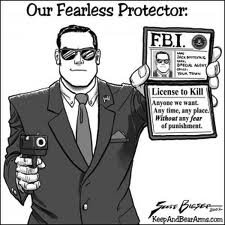 Now, I know that some of you here might say “but it’s still just a bill – it hasn’t been made ‘law’ yet.”  Of course, the kind of person to say such things likely still believes that the voters decide the outcome of elections, that there are real differences between the major parties and that we are all “equals before ‘law’” – in other words, the naive idealist.

The reality here is that the political class wouldn’t even be openly discussing the matter if they didn’t already have such power de facto (and the chief executive has exercised such power for years, just not at home – yet…) – even if this particular piece of legislation fails to pass, all it really proves is that the state is not willing to shed its illusions of “democracy” just yet: what bills like this signify is that the state is conditioning people to think of the kind of authority exercised by itself as being “normal” – parading this nonsense around in public is a sort of mental programming of the political mindset of the average person to accept that the state has the indisputable “right” to use this kind of power against the “bad guy.”

And who’s the “bad guy,” exactly?  Why, whoever the state says it its of course!  Thanks to this never-ending “war on terrorism” the enemy can be anyone – because there is no such thing as “terrorism” (yes, that’s right – it’s a made-up concept folks: this may as well be a “war on square circles” as far as objective reality is concerned) the state can declare anyone it wishes to be a “terrorist.”  In fact, it already has made significant headway on that front (see here for details: http://open.salon.com/blog/dennis_loo/2009/06/14/dod_training_manual_protests_are_low-level_terrorism ).

Yep, that’s right folks – if you oppose war, you’re a “terrorist.”  If you are environmentally conscious, you’re a “terrorist.”  If you have a cynical outlook on politics, own multiple guns, buy large amounts of gold and silver or even have more than seven days of food in your home *you* are a “terrorist.”  Well, “terrorism suspect” or “low-level terrorist” technically: but considering that the state has the power to drag you from your home, detain you indefinitely and even kill you on grounds of suspicion you are, for all practical reasons and purposes, a “terrorist” as far as the state is concerned – you are guilty until proven innocent (and perhaps even afterwards) and the state is not obliged to give you so much as the *chance* to prove yourself innocent of the “terrorism” charges brought against you (or even tell you what those charges are in the first place – that information is classified due to “national security” concerns).

All in all, the state is preparing to declare war against its own citizens – anyone who does not tow the party line and mindlessly chant “USA!” while serving the ruling classes will be officially declared an enemy.  Why?  Because the end of civilization as we know it draws nigh: as many of you are aware Peak Oil is coming and with it the end of this time of material abundance – the ruling classes realize that there’s only so much left to go around and now seek to maximize their share of the pie by simply cutting out everyone else! 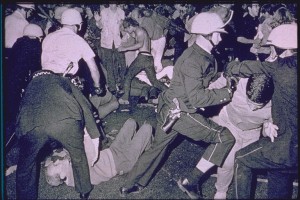 To that end, they need to ensure that the population is kept in line so that they don’t start demanding more of the pie than the elite deem proper for them to possess – what they seek is a Malthusian future in which the common man struggles for a pittance working for the crumbs that fall from the masters’ table.  But should there be open dissenters among the public there will be the possibility of rebellion and all-out guerrilla warfare against the ruling classes (and this is especially threatening in a land where there is a strong gun culture – as heavily-armed rebels pose more of a threat than peasants with pitchforks): in order for this vision of the future to happen the public must be beaten into submission – the protestors must be silenced, the cynics culled, the survivalists stripped of supply stocks and all potential rebels disarmed to ensure that no meaningful opposition to this dystopia can ever come into being.  To that end, all such persons are to be deemed “terrorists” so that the state has justification for acting against them.

False is everything in it; with stolen teeth it biteth, the biting one. False are even its bowels.

Confusion of language of good and evil; this sign I give unto you as the sign of the state. Verily, the will to death, indicateth this sign! Verily, it beckoneth unto the preachers of death!”

And as we can see nothing has changed since his time – the state continues to call itself and its own interests (i.e. “national security”) “good” and all opposing interests (i.e. “terrorism”) “evil.”  If you stand against the will of the state (which is “good” by default) you are “evil” and the state must make war against you because of it.

So, what can be done about this?  Is there some way to stop the state from exercising this power?  Maybe through proposing legislative reforms?  Or by “voting the bums out” next election cycle?

Thus speaks the voice of naivete once again…

To anyone who seriously considered the above suggestions I say “get real – none of this will happen.”  Why?  There’s a myriad of reasons involving campaign fraud, special interest lobbying, erosion of “rights” once thought “guaranteed” by the Constitution (which is, and always was, just a scrap of paper) and so forth: people can write books (and have done so) about all the lies, corrupt dealings and lives sacrificed for the benefit of the state under false pretenses over the last century alone!  But what it all really comes down to is this – power, quite simply, can’t be reformed because it does not *want* to be reformed.  Period.

Power can’t be reformed in any meaningful way – only broken.  The ruling classes won’t simply surrender their thrones, they must be pushed off those thrones: and then, to prevent another force from ever wielding that kind of power, the thrones must be burned – the only meaningful reform of power is reform carried out with matches and a can of gasoline.

Needless to say, this process will not be peaceful and most people don’t have the stomach for such things – the idea of taking apart the society they have come to know and rely upon (even as it abuses them) is a task that’s simply too great for the “good” citizen.  The “law” abiding types can’t imagine a world without such artificially-imposed order and thus are too frightened to let it go.  This is why the task falls to the “evil” persons of society: for they have the strength to do what the good can not.

To quote Neitzsche once more, ““When power becomes gracious and descends into the visible — such descent I call beauty. And there is nobody from whom I want beauty as much as from you who are powerful: let your kindness be your final self-conquest. Of all evil I deem you capable: therefore I want the good from you.

Verily, I have often laughed at the weaklings who thought themselves good because they had no claws.”

And just who are the “evil” ones to do this?  Well, if “terrorism” is “evil” and voicing dissent or preparing for armed conflict is “terrorism” then that would be us – if the state will label us “terrorists” for refusing to be helpless pawns in its games, then I say let us all take on that role of the “terrorist” let some measure of “good” come out of our “evil” for the alternative here is to be one of the “good” and powerless slaves of the empire: and the “good citizens” of the U.S./NATO empire will eventually wind up the same way that those “good” and “law” abiding Germans did back in the 1930s.

**Update** I’ve heard rumors about FEMA detention camps for a long time, but never quite knew what to make of them due to lack of hard evidence – however, some new (and very disturbing information has come out cocerning the “homeland security” deparment’s relationship with FEMA (you can read the details here http://www.informationclearinghouse.info/article29968.htm#IDComment237230472 ) but the portion that really caught my attention was the requisition for “140 million packets of food, blankets and body bags.”

The food and blankets seem innocent enough, but why the hell would FEMA need 140 million body bags?  There’s no natural disaster shy of a meteor impact that can kill so many people: yet FEMA evidently expects roughly half the U.S. population to die in a short time – something that a full-scale civil war would account for, and in such conflicts it’s the powers of state that do the lion’s share of the killing.

Addendum: due to some recent confusion resulting from a miscommunication, I wish to be very clear that what I’m advocating is *preparation* for conflict rather than initiation of one – I’m not going to tell anyone what to do here, but I will say use your own judgement and be smart about any subversive activities you participate in.

Always preserve operational security to the greatest degree possible, don’t trust outsiders with sensitive information and do not, I repeat, do *not* randomly engage in confrontation with agents of the state (armed or otherwise) – compromising security and randomly picking fights with the police state will render the future of your resistance cell a very short one indeed…

Azazel- The state is preparing to declare war against its own citizens – anyone who does not tow the party line and mindlessly chant “USA!” while serving the ruling classes will be officially declared an enemy.