The U.K. Labour Strikes- Which Side Are You On?

-Billy Bragg There is Power In A Union

The workers of the UK are staging a strike which is to my way of thinking much more effective than just camping out.  They are bringing the national service sector to a screeching halt and better yet over 30 or their labor unions are behind them.

Wednesday saw the almost complete shutdown leading to the closure of most state schools; cancellation of refuse collections; rail service and tunnel closures; the postponement of thousands of non-emergency hospital operations; and possible delays at airports and ferry terminals. But reporting as usual has been minimalizing the reasons for the strike.

To hear it told in periodicals like the Guardian and The Times, the workers are striking over cuts to public sector pensions. “The strikes have been called over government plans to overhaul pensions for all public sector workers, by cutting employer contributions, increasing personal contributions and, it emerged on Tuesday, increasing the state retirement age to 67 in 2026, eight years earlier than originally planned.” 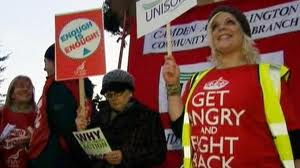 That would be a big enough thing, people who worked their entire life left with not enough to live on.  But this strike is about something bigger.  It’s a fight over public and private services.  At issue also is a report commissioned by Parliament by Will Hutton in which he outlines a merit based pay and retirement plan.

The backlash is big enough to worry Michael Gove and David Cameron who days before the scheduled strike reached for the spirit of the 1980s, the education secretary damning strike leaders as “hardliners itching for a fight”, and the prime minister condemning the walkouts as the “height of irresponsibility”, while also insisting on the day they had been a “damp squib”. The elitist of the journalistic community also chimed in (NHS is) “A monster that we can barely afford” is what Jeremy Clarkson of the Times UK had to say.

It isn’t shaping up to be that way.  In fact the issue has brought out a goodly number of strike rookies, most of them in their middle and elder years.  Some of them nervous and feeling bad about even being on strike but there just the same because it is so important to them.  Galvanizing is the support of the older already retired strikers coming out to support them in their demands.  They know how hard the jobs are for those in the public sector.  There is a decrease ability to perform some of these tasks after 67.  Slinging garbage and lifting patients is hard work.  Also more people in the jobs leaves no jobs for the young ones coming up.

No this is not just about pensions to quote Craig Murray:” In the mind of the ordinary people, this is action against the sickening levels of inequality in society.  This is also about resisting a drive to make public service workers pay for a crisis they have no responsibility for – while the bloated incomes of those in the financial and corporate sector who actually caused the havoc scandalously continue to swell.

What is different about the strikes in the U.K. and the Occupy movement in the States and other countries is the British people are not just sitting in.  They have decided to take awareness to a whole new level by showing Parliament and voters just what life could be like without them.  With emergency services like Ambulance and hospital care scaled way back to absolute life saving and many schools closing down completely.  As of writing some primary schools are still in session half day which has caused mixed reaction from parents.  Some in support and others feeling a bit angry at having to arrange childcare.  Interesting as schooling was never intended to be childcare in any case.

It will be interesting to see how this progresses as the people in need of childcare may be better off taking their own day off and joining the strikers in support.  It may in fact lead to an earlier resolution. It may be that enough of the U.K’s workers are fed up.  .”  In a study posted by the BBC prior to the strikes 67% of respondents were in support of the strikers.  In one video of the strikes, strikers sing made up jigs against the Tory party:

But don’t hold your breath also on the scene were the obligatory disgusted bankers saying they “Can’t afford to support the county.”  Somehow forgetting that everyone, public workers and all pay taxes and not small ones either.  British taxes are notoriously higher than what we in the states complain about, it is for this reason we see so many rock stars and actors setting up citizenship in the U.S.

In other areas of the U.K., outside of London the strike does seem to be garnering some serious thought and response. At Holyrood, Scottish government ministers and MSPs in the ruling SNP, the Liberal Democrats and Tories are expected to cross picket lines to stage a debate on public pensions; Labour and Scottish Green party MSPs will join the protesters.

What is most important here though is the well thought out and well planned difference between a protest and a strike.  Getting the unions behind a strike is brilliant and Americans would do well to think about this as most U.S. unions offer strike pay.  In addition the planned action that sweeps a nation and shuts it down causing not just a disturbance in a park but one in daily lives is something that has to be dealt with and not just with riot police. You can pepper spray a striking nurse but they still won’t be able to work.  It doesn’t solve the problem.

Many bloggers organizers and union reps in the U.S. are looking at this closely a quick search of “Why is  the U.K. labour strike important to the Occupy movement?” yields over 64,800,000 results a good deal of them discussing taking our disbanded Occupiers and moving them to the next level.

Strikes beyond local teacher salaries and trucker/teamster’s unions really haven’t occurred in the U.S. in several decades and none at a national sweeping level.  Once again, as with the riots in Tottenham, the U.K. may be leading this game of dissatisfaction in the western world.

Grainne Rhuad: “In the mind of the ordinary people, this is action against the sickening levels of inequality in society.”- Craig Murray