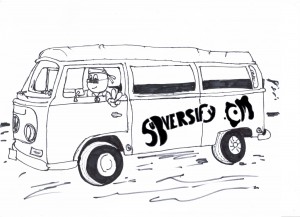 It’s been an incredible year for Subversify.  The International counter-cultural magazine that began with a few scattered stories and a reader base of a few close friends is now a bustling weekly edition, with six feature spots and a roll call of over thirty contributing and guest writers.  It has become the magazine that brings you the news before the media has even had its morning coffee.  In fact, we’ve been so on the ball, the official website, News before its News, wanted our stories.  Unfortunately, their conditions were a little unfavorable.  They wanted all our stories, without crediting the authors or the magazine, and they wanted them for free. Needless to say, Subversify said no.

We started the year with a big bang.  Grainne Rhaud told the world why Bradley Manning matters, Bill the Butcher warned that India was a famine in the making and Karla Fetrow raised objections to TSA gropes.  She also explained how the baby boomers destroyed the world.

In March, the unthinkable happened.  A devastating earthquake destroyed the nuclear reactors at Fukushima, Japan.  While the media downplayed the event, confident the disaster would be contained, Subversify said, not so.  The reactors were melting down.  This statement caused quite a fuss, but as the months rolled by with no respite from its nuclear woes, even the nay sayers had to say that Subversify was right.

In July, guest writer, Chris, gave us a personal account of his experiences with civil rights fighter, Mikey Weinstein.  The glowing tribute complimented an earlier interview Will Noble had contributed on Weinstein’s efforts to bring religious freedom to the non-Christian military personnel.

Ronald West has spent the last several months revealing the secret little dealings of the CIA and how those naughty little fellows get involved with all kinds of underhand dealings, including narcotics trafficking.  His reports rocked the site and it seems we’re still rocking. The Cracking the Matrix series soared into the all time top 10 and gave Subversify a much needed dose of espionage and political conspiracy.

In fact, we rocked so hard with Mitchell Warren’s essay of the censorship of Nibiru, a celestial body that hasn’t yet been determined to be a planet or a menacing asteroid entering our orbit, our shared server could no longer handle the skyrocketing traffic.  Subversify had a break down.

Whatever Nibiru’s constitution, it definitely knocked Subversify out, for a short while.  Within three weeks, the magazine bounced back, bringing with it a variety of new, exciting guest writes.  Professional travel writer, Alexandra Pratt carried us deeply into astonishing places, bringing the sights, colors and sounds of the frozen polar zone of Antarctica to the vivid greenery of Ireland.  We sponsored our first film company, Groundswell, the creators of the heart-wrenching documentary, “The Return of Navajo Boy”.

Then, Subversify went Viral.  Beginning with the recordings of “Stranger Advice”, an online talk show featuring interviews with experts on alien encounters and psychic phenomena, it also featured “Black Vampires”, a six member band whose music is described as “Hard Alternative Gothic Soul”, and “Decadent Nation”, whose four member band picked up their luggage and went on tour to rock the Nation pushing urgently against the machine.

Subversify is the news.  Early October and there is a rumble, the trembling quake of things to come.  Contributing writer, Eddie SantoPrieto drops from the board to join a protest in the streets of New York City; the beginning of Occupation Wall Street.  At the same time, Will Noble, a staunch writer who has been with Subversify almost since its beginning, marched off to join demonstrators in Washington D.C., protesting the government’s foreign wars.  From October sixth to October 12th., Will kept a live diary of the events that were published at Subversify Viral, giving Subversify up to the minute coverage of an event that was destined to become the world’s most defining moment of the year; the beginning of a global Occupy movement.

November and December brought us a number the final thoughts of the season, and fittingly, they were bittersweet, always thankful for the memories, even while remaining trepidations of new resolutions, new promises and new, inevitable disappointments.  The Advocate’s Devil, Azazel, known for a few years as an edgy commenter and a defiant voice to even the most experienced Subversives, begins his manifesto, not so much an ode to violence, but a dire prophesy, foretelling an upcoming revolution destined to be something less than peaceful, and one that perhaps cannot be prevented.  In “The War is Coming Home” the argument reaches a zenith, even as conspicuous behavior, namely the defense authorization bill, is reported in the mainstream media.

Perhaps it is only fitting that Mike, or Wicklowmick, ends a subversive year with some soul-wrenching and very often heart-warming tales of history, of holidays and of wintry friskiness.  From Three Wise Men, to The Little Donkey’s Tale, to an Irish dog show, Mike eloquently reminded us that “subversity” is not just about challenging the news media…it’s also about reporting the most wonderful, quizzical and amazing moments of this odd triviality named life, through history, through memoir and through shared experiences with friends.

All in all, we have enjoyed a wonderful year and tip our collective hats to the many writers, journalists, poets, cartoonists and smart-ass commentators who have made Subversify 2011 such an inglorious and incorrigible party.  A virtual bacchanalia of questions, answers, dogma, sarcasm, dirty limericks, lamentations and allusions to much smarter people than ourselves—what more can you ask of an online magazine?

Raising a Glass to our extended family! It’s been an incredible year for Subversify but we couldn’t do this thing without all the hard working writers and readers.

The Icelandic Accord: Part II Episode 5