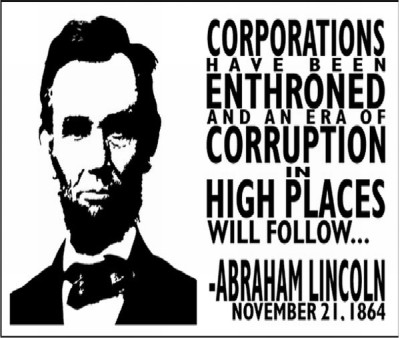 “I see in the near future a crisis approaching that unnerves me and causes me to tremble for the safety of my country.   Corporations have been enthroned and an era of corruption in high places will follow, and the money power of the country will endeavor to prolong its reign by working upon the prejudices of the people until all wealth is aggregated in a few hands and the Republic is destroyed.”

Could President Lincoln have been any more correct than with what has been happening in corporations?

After all, with collective bargaining, employees  had a chance to stand up for themselves without the repercussions of sudden termination.  Look at what has happened today.

•             Employees now work under an “at will” environment, where an employer no longer needs good cause to fire an employee

In short, employees have handed over their dignity in order to get a paycheck every two weeks. It is accepted since there is no coordinated bargaining tool to fight this. Because you see, collective bargaining represents ALL employees; allowing them to negotiate better contracts than one frightened or intimidated individual can.

But that wasn’t enough.  Corporations then decided to slash our jobs and raise prices of their services.  Take Bank of America for instance.  When Bank of America’s efforts to raise debit card fees offended enough people, they fought back and won. Bank of America dropped its plans to raise fees.  And this public outcry had a snowball effect and changed the minds of other banks, feeling the revenue generated was not worth the damage to their reputation.

What if the same boycotts were used when corporations decide to slash jobs for older workers and replace them with younger, healthier candidates?  Do you think we could eliminate corporate ageism used under the veil of the older workers being “overqualified” for these jobs?

The corporate propaganda has been fed to us.  We have no rights.  We are employees.  We will submit or risk unemployment.  Poppycock!

When corporations want to slash salaries from a liveable wage to something barely over minimum wage, they get away with it.  Why?  Because they rationalize there are many desperate candidates prepared to take just anything.  And the hiring agencies placing candidates have worked very hard to devalue workers by spreading this propaganda.

Look at any job website and see the rhetoric.  You must clean up your credit for a job.  You must remove your photos from Facebook of your personal life.  You must accept a wage that is half of what you made in 2001.

And so, corporations HAVE been enthroned and corruption has prevailed.  How could it not when corporations knew that unions make it more difficult to lay off employees and hold the company accountable for treating employees with dignity?

But this doesn’t have to be.  Consumers CAN take action.  When we hear that corporations are performing invasive background checks that have nothing to do with job performance, we can boycott the services and products of these companies.  We can announce these practices so they go viral.

A fine example of this type of thinking is revealed in the case of Rose Gudiel and her family.  When foreclosure on her home seemed like her fate, she stood her ground and utilized the same power as Occupy Wall Street has been using against Bank of America.  She protested with others rather than accept the the banks were to force upon her.  In the end, by demanding dignity and standing her ground, she won.

Others, like Grace Anderson have closed their accounts with banks like Bank of America because of decisions to slash jobs. Stating, “the bank’s recent decision to cut 30,000 job positions” affected her decision.

It’s cases such as these that are slowly telling corporate America that we CAN control our destiny, instead of allowing corporations to control it for us.

Can we wake up America and start taking back our dignity?

Jennifer Lawson-Zepeda-It is by design that we have given up our personal freedoms and Constitutional rights in order to seek employment. It was by design that corporations gradually removed unions from offices, and collective bargaining from negotiations.