15 Things I Hate About Dictionaries 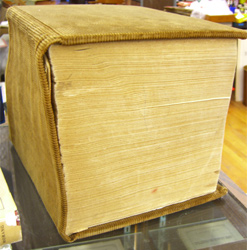 Subversify is all about warping the minds of the young and impressionable, after all they will be the next batch of writers, questioners and meddlers.  It is in that spirit we introduce an author who is to date our youngest at just 10 years old.  We like to encourage the young people to push back against the things they dislike thoughtfully.  Today it may be using dictionaries, tomorrow it could be the Constitution-or whatever new Charter we are bound to come up with.  We hope she keeps her keen wit although we also hope she somehow overcomes her loathing of dictionaries…or invents something altogether better.

I really hate dictionaries. Flipping page to page, it makes me beyond mad. And here are fifteen things I hate about dictionaries.

1- They are big. Have you ever looked at a dictionary and looked at the last page and it says 1575. Holy crap could it get any longer? Yes it can.  That brings me to my next pet peeve about dictionaries.

2-I see no reason for words that really don’t have to be in the dictionary. Like “Turducken” you really don’t need a definition for that because it’s in the name. It just adds to the pages. It really makes me mad.

3-I abhor repeated words. You could just put it down once and everything would be okay.

4- Why so many editions? Tomas Edison edition; Merriam-Webster; Colligiate; Sarah Palin-Words for Mama Bears? Really? Does it really matter? There could be a thousand editions but they all have the same meaning, to bore people to death while they flip page to page looking for a stupid definition.

5-Cell phones that have dictionaries on them. Honestly cell phones in general usually just make people look like smart-alecks when someone messes up on a definition. And it makes that person look stupid when that happens to them.

6- Even though I already said I hate huge dictionaries I also dislike small dictionaries. The writing is so small, you can barely see it. It is really frustrating. Or the large print ones. They are like one word a page.

7- I am constantly embarrassed by Computer programmed dictionaries like spell check. I hate it when I am writing and I misspell a word. The automatic changes are never what I wanted and somehow auto-spell is set for American English. It’s a huge pain when I want to write “colour” it automatically changes it to a different word that you do not want. Or when it doesn’t have the word you want.

8-Pictures in dictionaries peeve me.  Do you really need pictures in a dictionary? The answer is no, you really do not need that. It’s just one more thing to distract you from what you need to get. If you want pictures the book you are looking for is called an Encyclopedia.

10-Typos. What if you are copying a definition and there is a typo. You turn in the paper and you get a bad grade because the word is wrong. I get that typos happen but I have a sneaky suspicion that typos are there on purpose so a new edition can be made. (The dictionary not the Boy Band) Why else would anyone need a new edition every other year anyway?

11-I hate it when the dictionary doesn’t have a word I want. The dictionaries don’t have all the word in the English vocabulary. Usually when you bring this up you are told you aren’t looking carefully enough and to go back and look more.  If it’s really not there teachers get on a secret hotline and call the publisher to alert them to begin a new edition.

12-Out of date dictionaries suck too.  At most schools you will find one of two things: Picture dictionaries or Dictionaries so old they crumble when you touch them and the page where “Dork” should be is completely missing, which tells you it’s really old because nobody uses that word anymore.

13-Children’ dictionaries are useless they aren’t built to hold up to slobber and again with the pictures making them overly heavy.  Just give the kid a regular dictionary. Plus, they don’t have as many words.

14- The English language kills me with its multiple meanings and dictionaries make it confusing for school kids.  What do you do when you have a word that has multiple meanings in it? Which one do you use?  You want one definition but it gives you three and if you ask someone they tell you to suss it out (suss is also not in auto-fill)

15- Thesauruses-I get that these aren’t dictionaries, but they are like a dictionary’s side-kick and just as smart-alecked. You ask for one word and it gives you a thousand words with the same meaning. You asked for one word! You want that one word!

These are the most frustrating, aggravating, stupid, things I could think of about dictionaries. I’m sure there are more.  I am wholly against book burning but if I had no fuel I would use my dictionaries first. (thanks to my parents we have 4)  They are so big they would do to cook a meal and keep warm through the night.