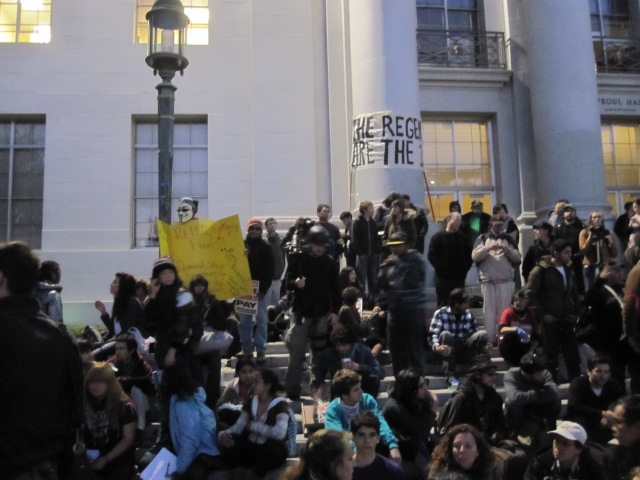 One surprising result of the new 99% movement has been that it has exposed, revealed and uncovered America’s vast homeless population.  “I’ve heard that in New York City, police are now instructing junkies, derelicts and the homeless to go down and live at Zuccotti Park,” someone recently wrote on my FaceBook page wall.

Hell, these poor homeless slobs have to go somewhere.

Before the Occupy Wall Street movement came along, most of the destitute and homeless of America had been hidden away, living in invisible places where they wouldn’t be noticed, hassled or jailed — but now, suddenly, with the rise of OWS, it’s now becoming cool to camp out.

As a result, we are now seeing America’s homeless emerge out into OWS encampments, out from their secret hovels and hidey-holes and cardboard boxes under the freeways — like rats coming out of a drain.  America’s rats.  America’s drains.

Back in the 1960s, we had only one (1) homeless person — living up on Telegraph Avenue during the daytime and in People’s Park at night.  Just one.  Back then, Frankie was an anomaly, even for Berkeley.  But now, as our schools, jobs, economy, infrastructure, healthcare system, Veterans Administration, senior programs, community networks, etc. all collapse around us as the money that used to fund them stops, changes direction and floods into the coffers of the rich instead, America will be creating more and more and more of this homeless jetsam and flotsam in years to come.

More and more of these socially-disposable prototypes are being created every single day as schools fail to teach, jobs fly overseas, militias point the finger of blame on everyone but the banksters, lobbyists and war profiteers responsible, healthcare becomes unavailable to the working class, large numbers of returning vets suffer from untreated PTSD, the “War on Drugs” creates more and more criminals, gouging your neighbor becomes a way of life, Social Security and MediCare are threatened and the One Percent concentrates on creating World Domination for them instead of democracy for us.

More and more urban homeless folk are being created each day — and more and more of them are now on the move.

Will the next one be you? 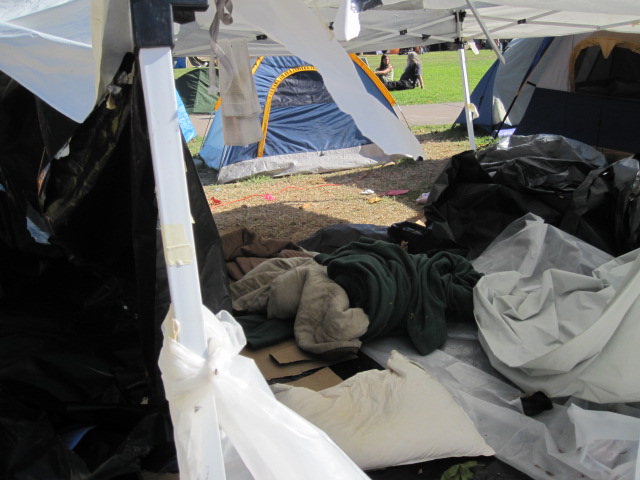 The dramatic new trend toward the militarization of America’s police is turning out to be a war profiteer’s wet dream.  No longer do weapons manufacturers have to trudge off to far-away places on the other side of the globe in order to start wars and kill people so that they can sell their products.  If they play their cards right, weapons manufacturers will now be able to start wars and kill people right here at home!

Or they can do both.

On November 9, they featured various segments in the news, covering protests at Occupy Oakland, Occupy Los Angeles, Occupy Denver, Occupy Seattle, Occupy New York, Occupy Austin, Occupy Chicago, etc.  And tonight I was also a part of “Occupy Cal”.  And the university police charged into a mass of student demonstrators like they were going after bank robbers or bad guys instead of just students protesting HUGE tuition hikes.  And the students stood their ground on Sproul Plaza against great odds.

The police seized tents and banners from the students — and what do you know?  The students seized them right back! 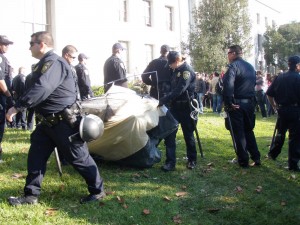 And, later, when there was a lull in between various attacks on students, I had a chance to talk to some of the cops.  “Are other local police forces involved in this operation — or is it only the U.C. police?”

“Just the university police, ma’am.  Not the city police.  But the chancellor stated that he would not allow tents to be erected on campus.”  And so the chancellor apparently chose to give an order to take the tents down.

“I used to protest here at this very same spot back in the 1960s,” I then told the boys in blue.

“Some things never change,” one cop replied.  Well, guess what?  Things had pretty damn well better change — or else!

Or else there will be a hit-and-run type of protest movement from the rest of us 99% — that will go on and on and on at different places daily all over America until things DO start to change.  The corporatists don’t have the money or the manpower to control all of us everywhere.  A non-violent hit-and-run guerrilla protest movement?  Yay.

And I just heard that U.C. Santa Cruz students have also gone out on strike. 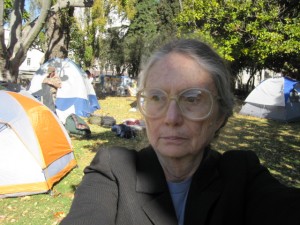 And will a plaza or university or town square or bank near you be next?

U.C. students in Berkeley are very well-represented by their district’s councilperson, Kriss Worthington, who was also on Sproul Plaza, backing his young constituents up.  Here’s what he told the Berkeley Daily Planet tonight:

Worthington then went on to admonish Chancellor Birgeneau and U.C. police chief Calaya for their violent actions against non-violent protestors.  “I wanted to bring to your attention that banners with Free Speech content appear to have been seized by UCPD in front of Sproul Plaza.  …It is hard to imagine that such an act could occur at the exact location in Berkeley where the Free Speech Movement began.”  Worthington nailed it exactly.

“You can imagine that the sense of irony will not be lost on the public, that the UCPD violated the Free Speech rights of protesters at this particular location.  …These students have made a firm commitment to no violence and no vandalism.  The University should be commending the thousands of students that are participating.  For many, this could be their very first political protest of their life.  They are protesting specifically for additional financing for the University of California.  The University should support this enthusiasm and help encourage this to be an effective protest that helps the University and our country.”
http://www.berkeleydailyplanet.com/issue/2011-11-09/article/38766?headline=Open-Letter-to-Chancellor-Birgenau-and-Chief-Celaya-re-Free-Speech-on-Berkeley-Campus–By-Councimember-Kriss-Worthington

Of course it is unacceptable that police are violently shutting down freedom of speech at the very spot where the Berkeley Free Speech Movement was born.  But even more unacceptable is the fact that free speech movements all over the United States are also being shut down — here in America, in the Land of the Free.

Decadent Nation Takes to the Road and Rocks the 99%