We were headed to the City by the Bay to Listen to Neil Gaiman read and listen to Amanda Palmer play the shit out of her Keyboard and Ukulele and as it turned out the Mandolin as well.

Right off we learned something.  Never trust what you read online when booking a hotel.  We booked a “boutique hotel” that was four blocks away from the venue.  Somehow however, I didn’t understand that “boutique” meant “painted over in trendy brite colors”.  Because as far as I could tell that’s as far as they went in their upgrades.  Also never in my life have I known “continental breakfast” to mean toast and instant coffee.

Also while I did advertise a perverse request for haunted hotels I did not expect to be kept up all bloody night by the sound of a cleaning lady’s cart going up and down the quay above.  I think that’s what it was; I was too exhausted to check it out.  If it was a ghostly cleaning lady I feel bad about that, I should have found out more about her story.

What did make me feel better was the fact that parking was free and the Palace of Fine Arts was literally 10 min away by foot.  A big plus as we and most everyone that night were held up on the bay bridge and got in late.

The venue was lovely, if what you crave is a working theatre-which I do.  You are surrounded by smells of dust and preservatives and old velveteen curtains.  There isn’t a lot of extra fancy inserted but you feel warmish and comfortable.

Opening up for Amanda and Neil were The Jane Austin Argument, an indie group from Oz that stole my heart with their story telling lyricism.  Nicely done and also they have a new Album coming out, Under the Rainbow.

I was wondering how a reading (which Neil did) and a punk cabaret bent rock goddess (AFP) was going to fit together on stage and the answer was while not seamlessly; it was better, it was comfortable.  It was just as they announced, quite different from what one would expect from the both of them.   Almost like being let into their parlor.  Maybe that had something to do with the crowd as well which was comfortable, and while definitely not silent, neither were they dancing.  I have heard that other venues have been different.

Especial favorites from the night were Neil’s reading of “The Man Who Forgot Ray Bradbury” which I assume to be about and for Terry Pratchett.  As far as Amanda’s performance, I cannot pick a favorite although Ampersand has not left me, following me to very awkward places as I sing it in my head during the last week.  But then again the same is true of Half Jack which was taken by request from the audience.  I did miss Brian Viglione on that one though.   The honest sharing of experience and emotion was electric and lingering in its effect.

The plan for the next day which was a Saturday was to try to connect with the Occupy group in San Francisco.  We missed them at the reserve bank where we had planned to catch them as the timing and/or event changed.   The main camp, what can I say: in some ways it was very much like a festival.  It made me wonder when people were going to get bored, broke or cold and head home.  In other ways it was one of the best organized Occupy groups I have seen thus far.  Check their webpage HERE. 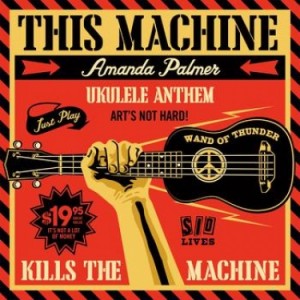 As a side note, Amanda Palmer has been stopping to play her Ukulele at every Occupy protest she has travelled through from Boston all the way to Vancouver (thus far) follow her tweets @amandapalmer and her BLOG to get her take on the vibe of the different Occupy movements.

Here she is playing to a crowd at Occupy Wall St.:

While we were wandering about however, there was something I noticed.  It was brought up last week on South Park of all places.  You can watch their episode HERE.  In any case the question has been raised, does the 99% actually represent 99%?

I saw as we walked about the homeless queuing up for food, they weren’t at the Occupy rally.  Indeed I have read in several places that they are either pushed out or hidden from sight at the Occupy rallies around the country.  It seems to me that those who are most active in Occupying are those who still have the means to do so.  Does this represent 99% of Americans?  Who are we if while we are protesting we are not feeding the neediest amongst us because we see them as dangerous or detracting?

As I watched I had to ask myself, are the Occupy protesters going to keep to the streets until these homeless queues disappear?  And while they are doing this occupying, who is serving?

Another split I see occurring in the so-called 99% is the shame heaped upon those who decide it is in their families’ best interest to still work.  I have listened and read comments to the effect that to not take to the streets to protest is to turn your back on your fellow man.

It seems to me that protest at this point is almost an elitist’s game.  It’s something the very young and those who are near retirement can do.  I didn’t personally come across any occupiers that were without shelter or the means to purchase food.  This is not something someone who is raising a family can do.   We cannot expect those with dependants to support who still have jobs to give them up and cart their children out for the one week it would take them to blow through their resources in order to make a point.

I’m not entirely sure that the protests themselves however well meaning are going to make a long term difference at all.  Our President who has sent support to other protesters in other countries has said almost nothing about the Occupy movement.  More importantly he has done nothing other than lose his cool in sophomoric fashion whenever the congress cock blocks him.  As commander in chief doesn’t he at least have the power to call off police forces that are abusing protesters like the ones at Occupy Oakland?

What taking to the streets has done is raise awareness.  Now that we are not ignoring the problem quite as much as before it’s time to bring this message home.   We can I think be more effective in our homes for much cheaper than it costs to buy a tent and travel to an Occupy location.

Here’s the thing, not enough is going to change until we effectively shut down commerce.  As long as people are Occupying places they are promoting consumerism.  They have to buy their coffee, water, food and whatever else they feel they need.  If Americans stop paying for things for a month or two guess who else won’t have money?

The people who can make a difference.  The companies that benefit from our money will ask for help from the government and they will be heard much louder because guess what?  They paid to put people in office.  Something absolutely will be done when we close down the flow to companies’ pocket books.

Also there’s no better time than now, with the holiday season gearing up, there is always an expected spike in spending.  What if the gift we gave ourselves was a little bit more freedom instead of trinkets under the tree?

We finished up our visit in Chinatown, which somehow was fitting.  It wasn’t planned, we had some time and pulled neighborhood names out of a hat.  After fuelling up on noodles and soup we tooled about the fresh food markets where the colors were more filling than anything we could possibly eat.  Somehow we ended up in one of those tiny shoppes that sell both trinkets and treasures talking with the proprietor about Fung Shui.  By the end of our discussion our house had been remotely Fung Shui’ed by sketch.

All in all it seemed we had a good house and with some tweaking we could expect prosperity or da ji da li. The proprietor explained to us also the difference between the cheap tourist trinkets and the more lasting strongly built relics.  “This coin here,” he showed us bends.  “While this coin while it costs more, my grandparents used for money, it is strong, it will last.”

It was a tad bit oxymoronic when we ponied up for this prosperity.  Prosperity it seems can cost a lot.  The shock on my companion’s face was almost worth the price but I did skim it down.  Leaving the shop he made the remark “I think my wallet has been Fung Shui-ed.  Indeed it had.

But herein is the lesson. While we had participated for fun, it’s one that applies to all belief systems. When you are in the right state of mind, things will fall into place.

It’s the same I think for the Occupy movements.  Keeping our minds and hearts in the right place which to me seems to be providing for those who cannot provide for themselves will help us reach our goals.  It will help us to make the large sacrifices, the ones that really cost that perhaps others cannot make, so that they can have prosperity.

It’s also not an easy task; shiny promises easily broken can be enough to let us off the hook.  We must wait for the stronger commitment.