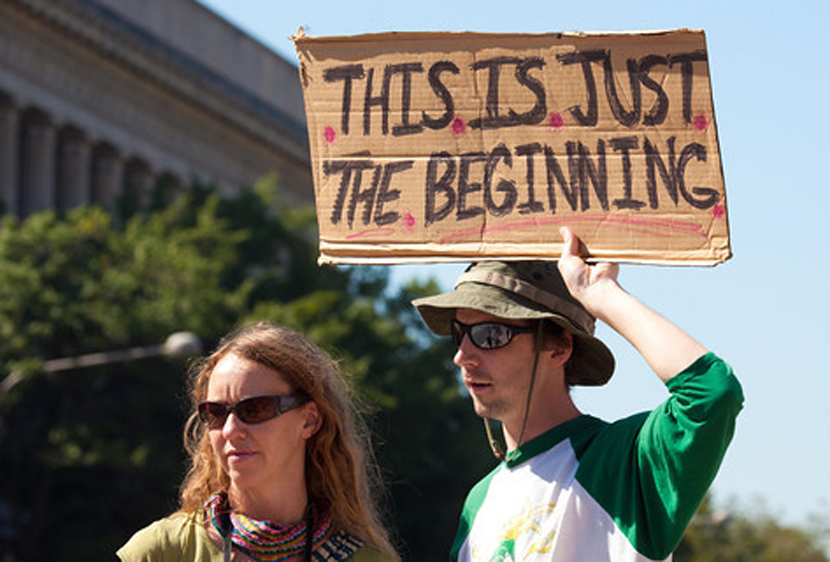 My next door neighbors are a late-twenty something fellow named Josh, and a fellow my age named Ed.

In Ed’s case, he got here (the Capitol Mall) yesterday; he’d been out of work for a couple of weeks, and decided to come here rather than sit at home and watch events transpire. In Josh’s case, he’s been out of work for a year and a half now since finishing a degree in education; he’s now up to his eyes in debt and wondering what he’ll do next – living at home with his parents is a luxury he has now, though, but he wants what most people in his generation want now – a life of his own.

For a large number of these people, that’s been derailed.

I really never understood, although I knew, the depth to which the events of the past ten years have affected America and Americans. One really has to stand here, surrounded by tents and sleeping bags and large numbers of burly-looking cops, to realize that the reasons for all of this are vast – almost beyond comprehending – that it took decades to destroy America, and that we are, if anything, patient to a fault that we didn’t do something a long-assed time ago.

The white-haired woman I met with the sign which reads, “You Killed My Son” sums it up as well as anything. Hers is the story which has driven many people here – older Americans who have lost a son or a daughter to the wars which have drawn its cannon-fodder from the poorest of society.

The protest to which I committed – October2011 – isn’t a part of Occupy Wall Street, although it seems to be confused as such; what most of us are here to do is protest the two wars which have destroyed a generation and a half of American youth and which have been a significant part of the ruination of our economy.

Because the lines are blurred, there are plenty of people here protesting the economic destruction of America by corporate greed.

That’s the other part of this situation which leaps out at me as I look around – it’s all interconnected. Follow the money, and corporate greed is what got us here. Grace Slick said it best via Jefferson Airplane so many years ago – “War’s good business; so give your son/Well, I’d rather have my country die for *me*”

Meanwhile, Ed and Josh are out of work. That’s not going to be changed any time soon; they might wind up living under a bridge once they leave here. I don’t know.

Some of the aforementioned cops and some guards at the Air and Space Museum maced a bunch of us yesterday – I wasn’t part of that, but I knew it was going on by the sound and the constant shouts for medical assistance. These people aren’t kidding around. The other day, I was told that a congressman named King had said that it would be a disaster (or similar language) if the media gave these protests any credence. From what I’ve seen, CNN (or “TeaNN”, as some folks here call it) have done their best to belittle everything.

I’ve a feeling that won’t last. There are a lot of independent media folks (bloggers with cameras; literally) making their presence felt. I don’t doubt you’ll see some action on YouTube.
What I know is this – it’s a beautiful weekend here in Washington. We may be here a long time. 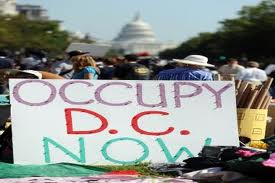 I just realized I’m a Luddite.

I don’t own a smartphone. I don’t own a digital camera. I don’t have a laptop (I’m borrowing someone else’s here). While it might have been nice to record some of what’s going on, I knew going into this thing that there would be dozens, if not hundreds, who would document all of this.

One of my current ‘neighbors’ – a young lady named Marie – is one of those. She’s a twentysomething woman who packed everything she owned into a backpack along with a small amount of food and her digital movie camera, and came to Washington from Pennsylvania. She introduced herself by way of asking me how I’d slept, with the camera in my face. I didn’t mind. I’ve seen a lot of that here – something which wasn’t possible during the ‘60’s is the real-time chronicle of events.

Right now, my back is sore. Sleeping in a park isn’t something I’ve done for quite a while. It’s warm enough out, and most of us are awaiting what we believe is an inevitable confrontation with the police.

Our permit to occupy the Mall expires today. As the organizers put it this morning, ‘this evening, our permit will be the First Amendment.’ Somehow, I’m doubting that the Capitol police will agree; they’re paid by the government, and are beholden to the vast moneyed-interests which really pay for everything around this place.

In front of me is the Capitol. It’s a huge affair; something which was built, no doubt, to be an imposing structure to anyone who saw it. We shouldn’t make any mistake that fear is one of any government’s motivating factors.

I get the feeling that the Capitol police wanted a riot yesterday. I can’t verify this; it’s only a feeling – but if any of us had stepped out of line by an inch as we marched on the Federal Reserve, or if anyone had so much as raised a hand at the Air and Space Museum, they’d’ve probably come at us with everything they had. They understand riots. Riots; they can control. They seem not to know what to do with people who’ll stand and take what they dish out.

One of them appeared – how would I put it – puzzled. I get the feeling (and again; it’s only a feeling) that they don’t really ‘get’ this; most of them are too young to remember 1968; they read about Kent State in history-books, and have no real clue what to expect.

The kids around me? They get it.

They know that citizenship, today, means putting one’s person on the line for whatever nonsense the government wishes to dish out; that freedom really means, in the end, putting one’s life on the line.

Nearly every person I’ve met here is out of work. Most have no assets; I’ve met several former business owners who are now in thrall to the government for taxes they’ll never be able to pay, courtesy of thirty years of banking-system deregulation and a meltdown they didn’t cause. The younger ones, as I mentioned yesterday, are in hock for college bills they’ll never be able to pay off thanks to no income, and for which the penalties keep accruing by the month.

These people are so screwed I can’t begin to describe it. When this is done, a lot of them have no place to go but the street.

I speed-read an article a bit ago on CNN’s website written by a fellow who was some sort of political science professor; his conclusion was that if these people want to change things, then they should vote and run for office.

I don’t know what planet he occupies when he’s not shoveling shit for CNN, but here’s the juice: The system doesn’t work any more, not for the masses of Americans represented here. It hasn’t, for at least thirty years.

Passersby have yelled at us to ‘get a job’. One person yelled back, “Love to! Know where I can find one?” I hate to be Captain Obvious, but the heckler has a very narrow understanding of what’s going on in this country. “Getting a job” isn’t what it used to be – not with one person in five out of work.

Raising children isn’t easy, either. Quite a few folks have brought theirs to the Mall. I’m hoping they remember this. I don’t know how many of them are going hungry here (getting food to everyone is erratic), but with one in four going to bed hungry all over America, I’ll bet that more than a few are already used to irregular meals.

Our permit was up at 2:00PM. Most have made no plans to leave; some local churches have offered to put us up; I may well wind up in church for the first time in decades. The police haven’t done anything yet – when they do, it’ll probably be after sunset. Even if the media have agreed to stay away, it’s best to round up revolutionaries after dark. Cameras – even the ones like Marie’s – don’t work as well.

Irony, if nothing else, abounds in this place.