The True Story of ‘Jack-o-Lantern’ 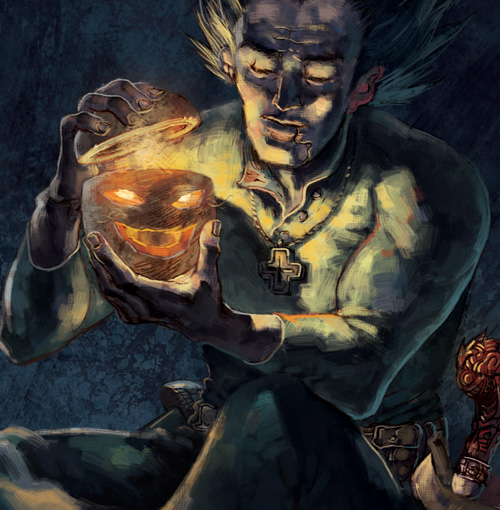 John Patrick Kerrigan was born on 31st October, 1897 in a small village on the outskirts of Westport, County Mayo on the West coast of Ireland. He was one of five children and grew up an ordinary and kind-hearted boy. It was not until he reached the age of 18 and having completed his apprenticeship as a Blacksmith, that he discovered the evil of alcohol. He became so fond of it that he would beg, borrow or steal money, or in fact anything that was not screwed down, to feed his thirst for the stuff.

He became a wandering farrier and went throughout the county shodding the many farm horses that were used in all forms of farm work in those days. For the first few years he was sought after for the quality of his work but soon the alcohol even affected his ability to do any sort of a good job. He became known as a drunkard and a lazy one at that. He had one thing in his favour; he had the ‘gift of the gab’ and once supposedly kissed the Blarney Stone. However, he owed so much money to local farmers that he was unable to get credit from any source nor any money from his family. He had to move away….

He moved across Ireland to County Kildare which is famous for its horses and was once again up to his old tricks. He was stealing everything in sight and became known far and wide for his misdeeds. Some people believed that it was because he was born on The Eve of All Hallows – Halloween that he was drunk more often than he was sober and hated throughout the whole of Ireland.

An old man told me the story of Stingy Jack when I was a boy and I believe every single word of it. The old man told me that he had no need to lie and if I didn’t believe him, sure wouldn’t Jack himself prove its truth to me in person some dark night.

Jack was also known as Jack the Smith. As I said his misdeeds were being reported all over the countryside and eventually reached the ears of the Devil himself. “Begob now” said the Devil, “this blaggard seems like an ideal candidate for me, I must have a little word in his ear”. With that, he turned himself into human form and made his way to Kildare where Jack was currently making an idiot of himself. What money he earned or stole he spent on drink and the only food he ate most of the time were turnips from the farmers’ fields. In fact he always carried a couple in his old knapsack.

Jack had been drinking all day and whilst making his way through a country lane he first met the Devil. The Devil transformed himself back into his true form and stood in Jack’s path. When he saw and recognised him Jack exclaimed “In the name of all the Saints and Holy Men, ‘tis the Devil himself. And what would you be wantin?” he asked. “Tis you yourself Jack, I’m wantin’, you will have to come with me”. “I suppose you’re right” replied Jack, “but what’s the chance of a little drink before we go?” Jack, as I said was a clever old so-and-so notwithstanding the drink. The Devil agreed and they made their way to the village pub which Jack had just left.

They both had several drinks and when the barman asked for payment, Jack said to the Devil “Sure I’m skint, I haven’t a brass farthing, you will have to pay up”. The Devil suspected that he had been tricked and said “Sure I haven’t a penny either, what are we going to do?” Jack scratched his head then replied: “Sure you can do anything, you can change yourself into a gold sovereign and we’ll pay up”. This the Devil did, not really knowing all Jack’s tricks. As quick as a flash, Jack grabbed the coin and stuck it into his pocket which also had a crucifix in it.

There was little or nothing the Devil could do as he was powerless in the presence of the cross and figure of Jesus. He was obliged to agree with Jack that he and his soul were freed for ten years provided he removed him from the pocket and away from the cross. And so it happened…..

Jack continued with his drinking, cheating, stealing and wanderings as if nothing had happened and that the encounter with the Devil had never taken place. As the years rolled by, Jack’s memory may have faded, but certainly the Devil’s had not.

To the day, ten years after they first met, the Devil reappeared to Jack as he lay in a meadow under a bright summer moon. “I have come to claim my prize Jack” he hissed in anticipation. “Is it that time already?” Jack asked. “Indeed it is Jack and from this moment on your soul is mine”. “Just one thing” Jack began but before he continued the Devil interrupted. “Not a single drink can you have, I will not be fooled again by you. Come on Hell awaits you”. “I’ll come as you ask” replied Jack “but can’t you hear me stomach rumbling. I’m sick and tired of eating turnips, can you climb that apple tree and let me taste a bit of fresh fruit before I start me eternal punishment”. The Devil shrugged his shoulders and climbed the tree. As he did so, Jack took out his penknife and began to cut crosses around the trunk of the tree thus ensnaring the Devil one more time. Once again he was trapped and another deal had to be done leaving Jack with the upper hand. This time the agreement was to be that the Devil would never take Jack’s soul into Hell. The Devil tried his damnest to get out of the deal but after several hours up the tree he agreed and was set free.

Jack continued with his lifestyle but eventually the alcohol and hard living took its toll and he died. As his soul came to the gates of Heaven, St. Peter began to look up his records and because of all his stealing, drinking and cheating he was barred from entering. He stood outside the gates for many, many years until he eventually begged for permission to try and enter Hell.

At his approach the Devil laughed in his face and told him to clear off. As Jack had not had any alcohol now for many, many years, he told the Devil that as he was going to have to return to earth in a ghostly form, could he have something to keep himself warm. The devil tossed him a burning coal from hell and Jack departed.

From that day to this, and particularly on Halloween, Jack can sometimes be seen roaming the earth in his old black torn clothing. He carries one of his turnips which he hollowed out with his penknife with the fiery ember from hell glowing inside. Some people call it the “Jack-o-Lantern”.

And now, that’s the end of my story, or should I say the old man’s story and as he swore an oath that every single word of it is true, who am I to say he lied……..

Oh yes, and by the way, when Jack wanders in foreign lands where there are no turnips, he uses a hollowed out pumpkin or such – it’s the same Jack wherever you see him……………….

Mike- Some people believed that it was because he was born on The Eve of All Hallows – Halloween that he was drunk more often than he was sober and hated throughout the whole of Ireland.