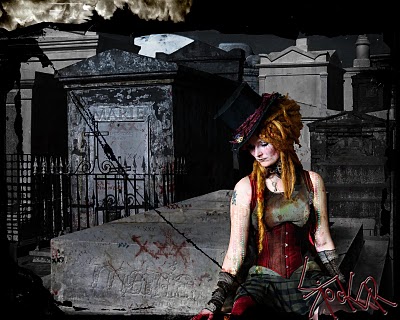 Stan leaned against the kiosk, staring at the filthy constellations speckled on the ceiling, waiting for quitting time. Dave sat on his stool on the other side. That was store policy here at NEON: always work in pairs. That way you might grab mall traffic on both ends, coming and going. The two men wore the standard NEON uniform: orange shirts, brown slacks, and day-glo orange sneakers.

Stan could barely make out his work partner on the other side of the rows of MP3 and cell phone covers, lined up in glimmering shades of a plastic rainbow. They were spray painted in patterns some NEON idiot considered artistic, but which reminded Stan of swirls of alcoholic puke in the toilet after he’d spent too many nights on Bourbon Street, where the hurricane glasses were made of thin plastic and the drinks seemed to glow in the dark.

“What time is it?” Stan called across the kiosk.

“Fling it in the trash.” Stan kicked his chair in frustration.

“What, you got a hot date or something?”

Stan hated this plastic crap. He hated pandering NEON. He hated the entire mall, with its bright lights, shining walls of glass, reflective white tiles. It all glared down on him, disapproving. Its lines hurt something in his soul.

The real New Orleans was out there, beyond the mall boundaries, where antique shop fronts boasted skeletons dressed in top hats raucously coated with glitter. Gas lights flickered over cobbled streets: Bayou, Chartes, Dante, Mystery. Metal horse heads loomed from edges of brick and intricate wrought iron decorated every surface like the lace on a prostitute’s skirts.

That was where he wanted to be….stalking his prey.

Stan snapped out of his reverie. Sure enough, Mr. Valdez was walking up the aisle in his white suit, holding out two sealed envelopes. “Quitting time, boys! It’s payday!”

Stan took his envelope and folded it into his pocket. The money…the money made it all worthwhile. With it he bought the trappings he needed: stylish suits, booze, fancy food, all the lures to bring them in. To make the girls trust him.

Tonight’s prey–she was out there somewhere. He could almost smell her.

“Goodnight,” he tossed. “I’m outta here.” He waved over his shoulder without looking back.

Outside, the city smelled of the water that surrounded it: slow and thick, it swallowed corpses and divulged no trace. Every corner harbored a secret, a whispered taste of absinthe and dust. It was a city in love with death. The slithery city. His stalking grounds.

Stan paused abruptly to look in the window of the voodoo museum. Postcards vied with bizarrely altered Catholic saints for attention; sutured dolls and oily candles littered among them. He had lived here all his life, yet never visited one of the city’s most famous attractions. Tonight, it occurred to him that he might change that. There was something deep to voodoo, he suspected now, something that spoke to him in sparks in his blood. He wished he knew its secrets. It called to him, wanting him to follow the intricate tracery of its veins, to be lost in its shadows and never come back.

Why not? There was time.

He swung the door open. A soft tinkling of bells, and the feeling of consuming dust, the smell of snakeskin. The space was crammed with albino alligators, pythons slithering in cages, skulls, moth-eaten top hats. Coins sparkled on every surface.

A black woman with startling blue eyes took his money. As she counted it she gave a graceful gazelle turn, all flashes of throat and tosses of hair.

A sizzle went through his heart.

Now he knew why he had been called to enter. His victim for tonight sat before him, marvelously haughty.

He took a hank of his own hair in his hand and tugged at it, willing his brain to shut up, to be patient.

The muggy Southern springs always made him antsy. The mushy days brought splotches to his eyes, an itch to his beard, restlessness to his crotch, and vomit to the backs of his teeth. Women and their summer promises, all of them cruel, regal, unapproachable.

Gently, carefully, he fingered the smooth edge of the knife in his right pocket amid some quarters, a few pennies, and some lint balls. This is for her, he promised. This coldness, this ending.

He thought of saying, “I’m new in town,” asking her to lend a hand, but no. Too obvious. Too needy. He took the pretense of studying a brochure.

While he was thinking, her face became a slow smile, a smile of pleasure. The eyes shone in her face, and he braved it.

“This place is a little dead for you,” he hazarded. “When does your shift end?”

“Whenever I want it to.”

She offered him a cigarette and he declined. She lighted her own, a clove. The sweet smoke lingered in the air. She inhaled, eating smoke. So alive. Then she leaned in. Her curtain of hair brushed his wrist. “Let’s get out of here.”

He was delirious with his luck as they headed past one of the innumerable graveyards named for Saint Louis. The cemeteries in New Orleans were all aboveground to keep the corpses from polluting the groundwater. He hardly knew how they had gotten there, where they were going. All he knew was he had never had things fall into place so easily, not once.

She steered him through the wrought-iron gates, walking from grave to grave, many of which were broken open. Here and there, the mausoleums were decorated with little red Xs, voodoo spells and lit votive candles. The woman paused by the most famous grave of them all: MARIE LEVEAU.

Grinning, Stan felt once more the sharp gift he was going to give her. Yes, a knife was uncertain, not as deadly as a gun, but so much quieter. It needed finesse. He leaned in as if to kiss her, disarming her suspicion before he stabbed.

Her voice was so quiet at first he wasn’t certain he heard her. But something dark and sour in her breath made him pull back instinctively. The stinking wind of deception.

He tried to back away, but her grip held him tight.

“Mighty loa,” she screeched, arm raised, her own long knife glittering, “I pray you accept this sacrifice!”

In the soft place between his ribs, her knife lodged.

Stan sagged as he stared at her, eyes wide in surprise.

She smiled for a moment, relishing the hunter’s realization that he was the victim.

With one hand she moved Stan’s limp form against the open crypt. Splintered buildings hovered crack-toothed over the melting rot of the water; salty air like the insides of a clamshell. And a new smell, coppery life. The knife disappeared, already cleaned.

With hesitant, polite fingers she searched for a wallet. ID. Anything. Then she found the sealed envelope. Gently, with her pinky nail, she sliced it open.

“Stan McGovern,” she read aloud, before replacing everything exactly where it was. She would not steal from the dead. She only needed to know their names.

“Stan,” she said again, scripting the black scrollwork of the name with her tongue. Then she rummaged through her loose robes and took out a small black book.

So cliché, she laughed at herself, yet so appropriate.

In the black book she put the name Stan McGovern under the seven others already lining the ledger.

Suddenly in her head was the repeating idea: names spiraling down the creamy paper, till her eyes lost focus. The thought filled her mind like the hiss of empty speakers, too loud, echoing, confusing, abandoned.

Savannah Thorne- There was something deep to voodoo, something that spoke to him in sparks of his blood. He wished he knew its secrets. It called to him, wanting him to follow the intricate tracery of its veins, to be lost in its shadows and never come back.