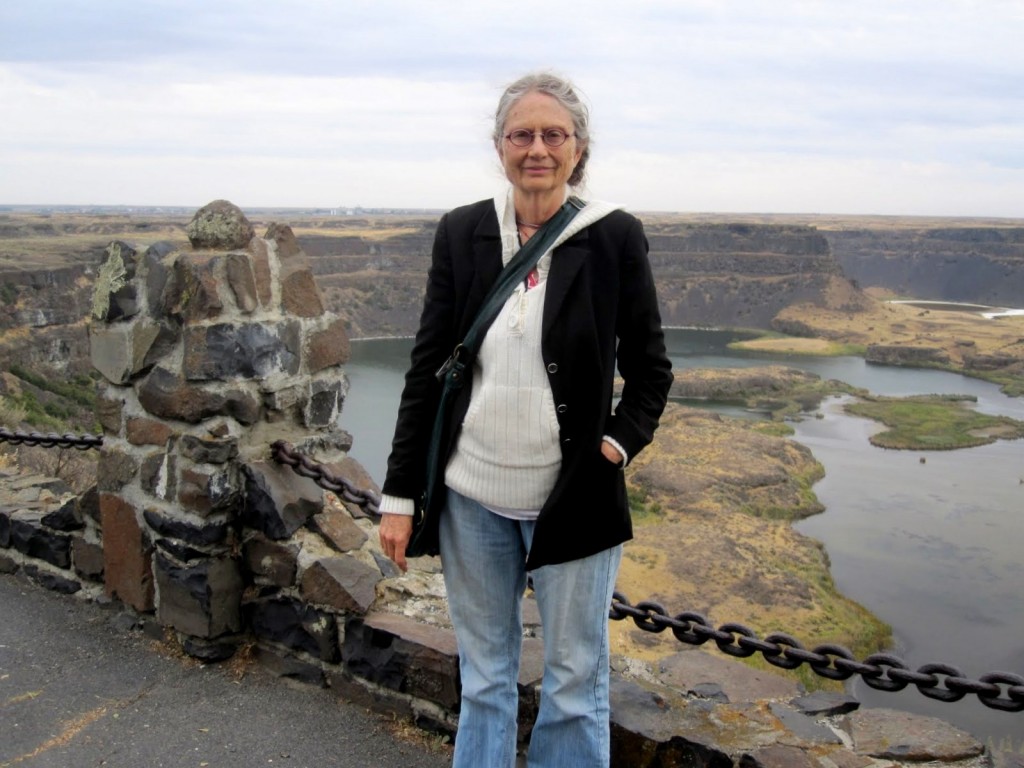 Just three days before I was supposed to go on a two-week camping trip through the Northwest, my eyes started to burn and hurt.  And then my vision started to get blurry.  Yikes!  So I immediately got all upset and rushed off to the doctor — but also started comparing my own vision problems with those of America’s vision problems as well.  I am not alone.  America’s vision has also gotten pretty blurry recently.

For far too long, we Americans have sat back and placidly allowed just one percent of our number to own 99 percent of our money.  And, as a friend of mine in Poland recently wrote me, “Democracy is incompatible with capitalism as long as the three richest people in a ‘democracy’ have more money than the gross national income of the world’s 48 poorest countries.”

So I went off to my optometrist, got acupunctured, bought herbal eye remedies, stuck prescription drops in my eyes, packed up my computer and went camping anyway — hoping that my vision (and my country’s vision too) would somehow miraculously clear up.

The first stop on my tour of the Northwest was Seattle and the famous Pike Place Market, where someone had told me that they sold horsemeat.  According to traditional Chinese medicine, eating horsemeat is good for one’s eyes.  But I couldn’t find any there.  Apparently you have to go to Asia or Europe to find horsemeat to eat.  All they sold in Seattle was salmon. 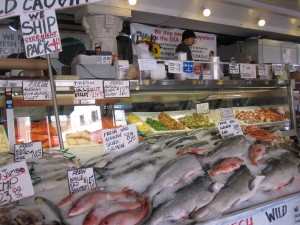 “Here’s the story on horsemeat,” said someone I met while drinking coffee in Seattle (everyone drinks lots of coffee in Seattle, BTW).  “It is illegal to slaughter horses in the United States — so they are all rounded up and shipped off to immense slaughterhouses in Canada.”

But not all Americans think that the butchery of human beings — either here or abroad — is a swell idea.  And in the city that gave us Grey’s Anatomy and the Space Needle and Starbuck’s, “Occupy Seattle” is now in full operation — right down the street from the historic 1999 WTO protests. 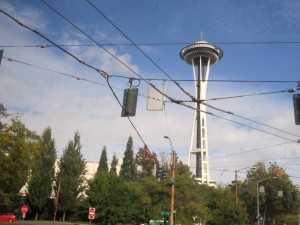 And then the next day I went off to visit “Occupy Spokane” too.  Perhaps America is finally getting its vision back after all.

PS:  In the misty Cascade mountains lies the small town of Leavenworth — not Leavenworth, Kansas, home of the famous prison where Bush, Cheney, Obama and half of Wall Street clearly belong, but Leavenworth, Washington — a cute tourist replica of some small town in Bavaria.

When the railroads no longer stopped in Leavenworth, Washington, and the logging shut down, people there were hurting so they thought of a gimmick to get themselves through the hard times — and went Bavarian.  Now Leavenworth is a regional tourist attraction with an Octoberfest and a Christmas-tree-lighting festival and everything.  See?  You don’t have to make war on strangers in order to survive economically these days.

But I gotta admit that the “Occupy Leavenworth” movement consisted mainly of me.  Everyone else was too busy wearing lederhosen and eating bratwurst. 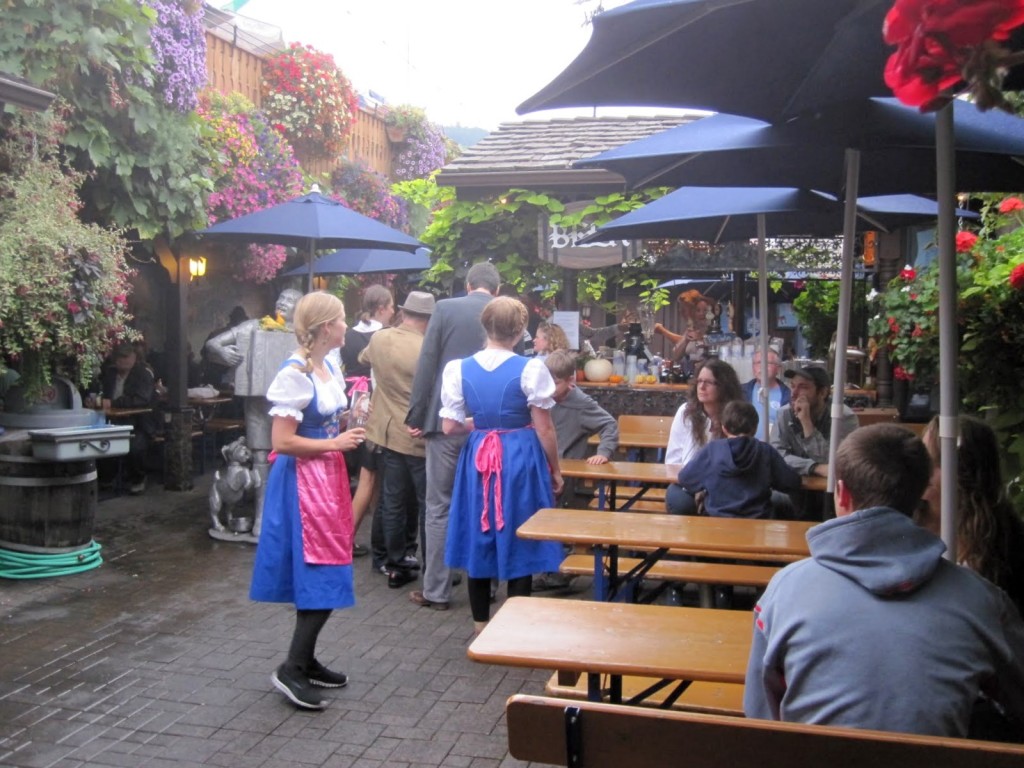 ****
Andy Borowitz does it again — puts that whole Wall Street mess into perspective:  Wrong People Arrested on Wall Street: Goldman Boss: ‘Thought They Were Finally Coming for Us’

NEW YORK (The Borowitz Report) – Millions of Americans cheered the news on Friday that arrests had finally been made on Wall Street, but were soon disappointed to learn that the wrong people had been taken into custody.  “I was like, finally they’re going to get those bastards,” said Tracy Klugian, 27, of Queens, New York, whose hopes were raised by an “Arrests on Wall Street” graphic he saw on CNN.  “I guess it was too good to be true.”

NYPD spokesman Frank Hannefy explained the controversial decision to arrest Occupy Wall Street protesters while leaving the people who had brought the nation’s economy to the brink of Armageddon unmolested.  “As far as soulless individuals pillaging the country for their personal gain, that’s none of our business,” he said.  “But we’ll be damned if we’re going to let people march on newly seeded grass.”

At banking giant Goldman Sachs, chairman Lloyd Blankfein admitted that when he heard police sirens outside his building, “I was sure they were finally coming for us.”  The Goldman chief said he started running up and down the halls “screaming at people to feed the document shredder like Chris Christie at a pie-eating contest.”

Mr. Blankfein said that he felt “palpable relief” when he realized that the police had come to arrest the protesters and were leaving the bankers at large.  “That was a close one,” he said, chuckling.  “We’re all going to have a good laugh about this over the weekend in the Caymans.”
http://www.borowitzreport.com/
****
From JoAnn:   An orphanage in Afghanistan, AFECO, is under actual physical attack from members of the Afghan parliament.  Please help support AFECO:

…On Tuesday morning, September 20th, AFCECO was once again the target of inexplicable animosity, not from enemies among Taliban insurgents, but from elements of authority within our very own civil society. Several Members of Parliament along with armed guards stormed through the gates of our New Learning Center just as the doors were opening for a car to leave. These intruders came without warning, full of threats and accusations and commands, brandishing their rifles. The intimidation level was one step short of an operation to apprehend Al Qaeda operatives in the middle of the night. The only ones to field this intrusion were our young female staff members responsible for reception and library duties at the center….
www.afceco.org

Jane Stillwater: Not all Americans think the butchery of human beings is a swell idea. And in the city that gave us Grey’s Anatomy and the Space Needle and Starbuck’s, “Occupy Seattle” is now in full operation — right down the street from the historic