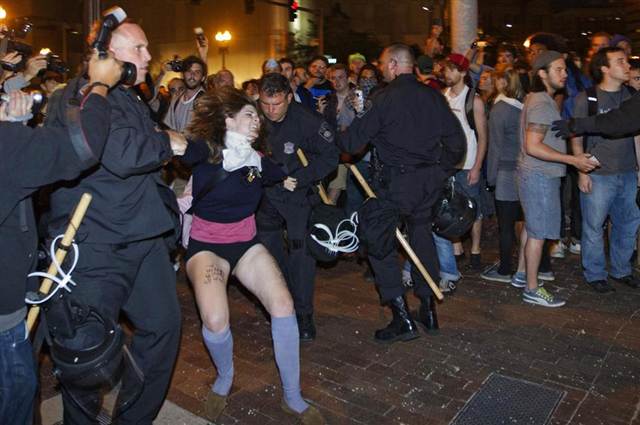 As astonishing as it might seem, the hottest topic to take the Internet by rage has received very minimal, if not completely biased coverage by the mainstream media.  The scattered reports barely make a blip  in local newspapers, and are generally presented with very little attention given to the topic in question, and rarely connecting it to a mass movement, preferring instead to credit the activity to a lunatic fringe or a handful of participants with no real influence. However, it is a topic that monopolizes Twitter accounts, fills the spaces of personal blogs and has collected an International following.   That topic is the occupation of the grounds where decisions are made concerning economics and politics.  This occupation, which began as a demonstration at Wall Street, consists of literally pitching a tent and remaining in one spot for the duration of a protest, which, for some, have been several long weeks now, with permits ending and threats of forceful removal.  Sometimes, the threats are carried out.

The media portends to complete confusion as to exactly what these protests, which have sprung up like mushrooms in over a hundred cities within the United States and spread its way across the ocean, are all about.  They pick up on a few catch phrases, such as “corporate greed” and “we are the ninety-nine percent”, as though echoing the words of a new language.  It’s almost as though the conscientious journalists of major publishing houses have not followed the erupting housing bubble, the bank bail-outs, the downsizing of companies aggravating unemployment, the increased expenditures in war-faring, and come to the conclusion that these events would have any real impact on the general public.  They seem surprised that people are expressing needs and can’t imagine what needs should be so dire as to unite diverse interest groups into a single demonstration of solidarity.

Perhaps, it isn’t the subject of issues the media is so befuddled by, but the fact that the protesters refuse to recognize any particular political party as its driving force or representative.  In a year of election campaigns, there are no groups rallying for the support of a candidate.  In fact, Boston has made it clear they want to keep politics out of it.  An article in the Washington Post writes that, “Despite having no single leader and no organized agenda, the protesters insist they are on the verge of translating their broad expression of grievance into a durable national cause. “The criticism has focused on the lack of cohesion in our message and demands,” said Arthur Kohl-Riggs, 23, a political activist from Madison, Wis. But what the critics don’t understand, he said, is “the value of forming a direct democratic movement” that is not controlled by political elites.”

This refusal to align itself with any political entity has stirred up a hornet’s nest, even among factions who assert “they are going to take back the government”.  In fact, apparently, taking back the government for their own specific agendas seems to be exactly what these various factions want.  They rally their followers around a basis of religious fervor, around immigration and or discriminatory laws, less money spent on social programs, although not on war,   but never around the basic good of the constituents as a whole.

Eric Cantor, the House majority leader, has denounced “mobs” and “the pitting of Americans against Americans.” The G.O.P. presidential candidates have weighed in, with Mitt Romney accusing the protesters of waging “class warfare,” while Herman Cain calls them “anti-American.”

Michael Bloomberg, New York’s mayor and a financial-industry titan in his own right, was a bit more moderate, but still accused the protesters of trying to “take the jobs away from people working in this city,” a statement that bears no resemblance to the movement’s actual goals.

What are the goals of a movement that has motivated thousands of people to throw aside their individual differences, pack up a bag with supplies and squat in front of banking institutions, in city parks and town squares?  On Wall Street, where the protests first created the momentum, the answer was relatively simple.  The people who organized the protest on September 17, wanted to make their voices heard among those they felt were directly responsible for the economic crisis.  Two weeks into the demonstration, without a particular statement of intent, the leaderless resistance movement, as it was called, was beginning to falter with a little uncertainty. 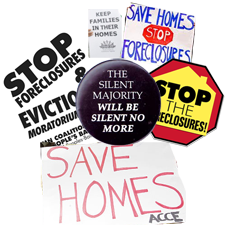 “At a certain point, there’s a valid criticism in people asking, ‘What are you doing here?'” protester Chris Biemer, 23, said on  Day 11 of the demonstration. In an exchange that illuminated one of the dilemmas that any movement for change faces in trying to sustain momentum, Biemer and protester Victoria Sobel made it clear they had different visions for Occupy Wall Street.

Biemer, who recently moved to New York from Florida with a degree in business administration, says that ideally the group should team up with a nonprofit organization and get office space.

“It’s possible to stay here for months or longer, but at some point we’re going to become a fixture,” he said of their home in Zuccotti Park, a privately owned, publicly accessible plaza dotted with trees and flower beds about midway between the Stock Exchange and the former World Trade Center site.

Sobel, who like Biemer serves on Occupy Wall Street’s finance committee, disagrees and said the group’s strength lies in its ability to remain highly visible and in a place where anyone can visit and participate.

“It’s a moment of clarifying for us,” Sobel said, confident that as autumn’s chill turns to winter’s sub-freezing temperatures, Occupy Wall Street will stay put. “We’ll layer,” she said with a laugh, when asked how they’ll manage the cold. 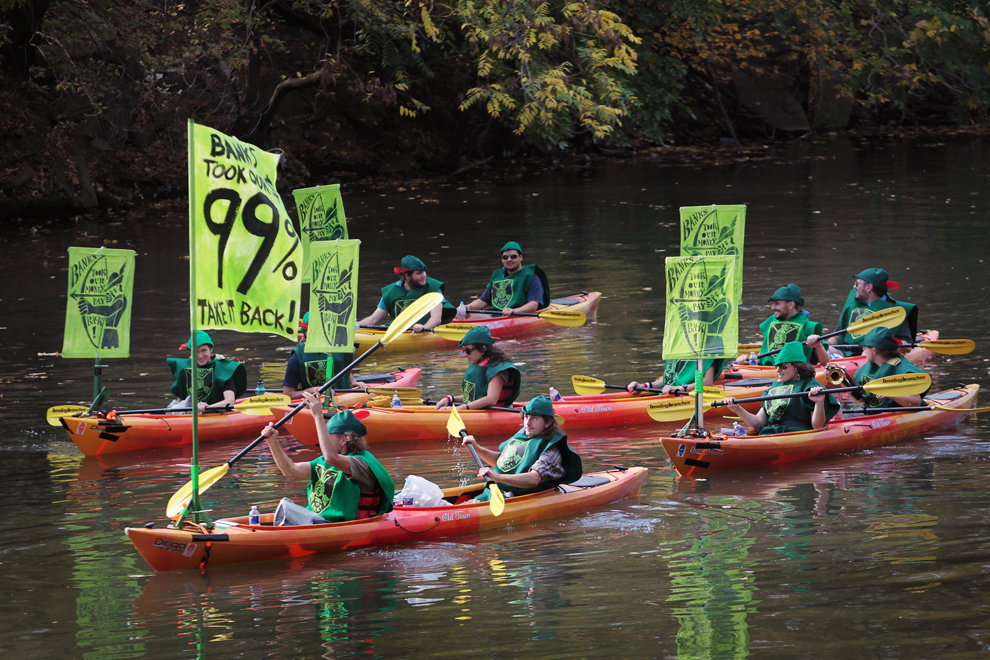 By October 4, the Occupy Wall Street protest had taken root nationally, with sympathy rallies occurring in Boston, Chicago, Los Angeles, and Washington D.C.   On October 10, Chicago had drawn a list of demands for the Mortgage Banking Conference, even dressing as Robin Hood’s and floating down the river in kyaks to deliver the message: “It’s time for big banks to pay us back.”

Here are the demands that the protesters presented to the MBA:

1) Raise the marginal tax rates on the wealthiest individuals by ending the Bush Tax Cuts and supporting the Rep. Schakowsky’s Fairness in Taxation Act.

3) Enact a real jobs program that will put millions back to work repairing and upgrading our crumbling physical and social infrastructure.

4) Require the banks, Fannie Mae, and Freddie Mac to lower principal amounts for all the underwater mortgages they hold and guarantee to create jobs, save communities, families and tax-payer dollars from any more unnecessary foreclosures.

On October 11, organizers for Occupy Dame Street, a protest in Dublin, Ireland that sprang up in solidarity with the Occupy Wall Street demonstration in New York, presented their own list of demands.  The protesters declared  they want the EU and the IMF to “stay out of Ireland’s affairs”; an end to the burden of private debt on the people of Ireland; the return of ownership of Ireland’s oil and gas reserves to the people of Ireland; and for “real participatory democracy”. 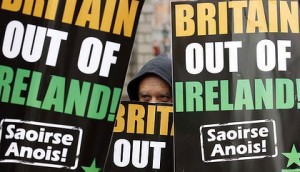 The movement that began as a general discontent with the monopolistic practices of the wealthy, began to articulate deeper and more disturbing reasons for their unhappiness with corporate policies.  It was no longer just about banks receiving unfair bail-outs, illegally repossessed homes closing corporate loop holes.  Subversify writer, W.D. Noble, joined the Occupy the Capitol movement, spurred by the homeless plight of a friend, but taking part in a protest against the war in Afghanistan.  When the peaceful  protesters marched through the Smithsonian, and specifically an exhibit that featured the drones used more and more by the United States to perpetuate war in the Mideast, they were pepper sprayed.

While many of the towns and cities have allowed the Occupiers to peacefully protest, other areas have responded with cruelty and suppression.  Houston complained of police officers removing their tents and rough handling demonstrators.  Police brutality and arrests against a line of protesting Vietnam veterans  rocked Boston on October 11, illustrating once and for all the narrow viewpoint of the town that banned the 1960’s rock and roll hit, “Eve of Destruction”.

During a speech at the Liberty Plaza in New York City, Slavoj Zizek said, “This is how we live. We have all the freedoms we want. But what we are missing is red ink. The language to articulate our non-freedom. The way we are taught to speak about freedom war and terrorism and so on falsifies freedom. And this is what you are doing here: You are giving all of us red ink.”

The red ink spread.  The demands broadened to include ethical, affordable health care, environmental responsibility, racial, cultural and sexual equality, humane treatment for animals, and an end to monopolistic farming practices.  On October 12, Occupy Spain announced there were now 650 cities around the world standing in solidarity with the Occupy Wall Street movement.

The Bonds of Unity 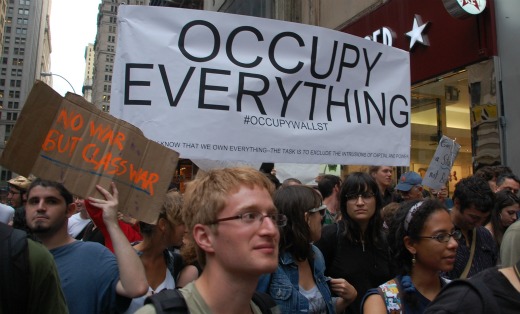 To the uninitiated eye, it might be puzzling that so many diverse interest groups would show solidarity with the Wall Street protests.  To the political groups, accustomed to broad based slogans, media backed advertising and identifiable leaders, the refusal to acknowledge any politically driven machinery must be very disconcerting.  There is no agenda to take the government back, only to make the government work for its inhabitants.  There is no agenda to change the Constitution, only to make democracy work for the constituents.  The focus, whether environmental, economic or health oriented, is strictly on the corporations that control our natural and human resources.

The anti-war protester, angry that NATO invasive practices are nothing more than a ruse to control the world’s oil will find it convenient to side with the environmentalist who wants clean energy, who in turn, finds it advantageous to side with small farmers who find it agreeable to side with those who demand an end to chemicals, steroids and stimulants in the food they eat, and the chain continues… They are united because the enemy has the same face the world over; corporations with monopolistic practices that damage the ability of wage earners, small business owners and independent contractors to maintain an equitable income, that harm the environment through pollution and human resources through war, with absolutely no concern for the suffering and deprivation of the millions of people they plundered and countless resources they raped.

As winter approaches and the cold sets in, there are many who feel the Occupation will be just one more protest that will die down in the frenzy of political campaigning, holiday spending and media entertainment.  They believe many of the occupiers will go home, and quite possibly, many of them will.  This however, is not going to stop a movement that has been ignited and fueled by desperation.  Winter means greater energy consumption, greater hardships for the homeless, greater struggles for marginal incomes.  If the corporations continue with their business as usual, it will also mean continued outsourcing for products, spiraling costs for food and more foreclosures on businesses and homes.  Wages will continue to remain the same and social services will be maxed to the limit.

An occupation, born of necessity, without leaders, is not one that will just go away.  An occupation that ignites sympathy rallies the world over, is not one that will fade.  It will explore its options within a global network of disenfranchised people, it will find its voice within the ninety-nine percent.  Every tactic used, every action taken to suppress it will only make it stronger.  It isn’t a passing protest.  It is the challenge of the new era.

Karla Fetrow- With Occupation camps springing up all over the United States and around the globe, there still seems to be some confusion as to just what protesters want, although the protesters make it very clearly it’s at the corporations they are taking aim.