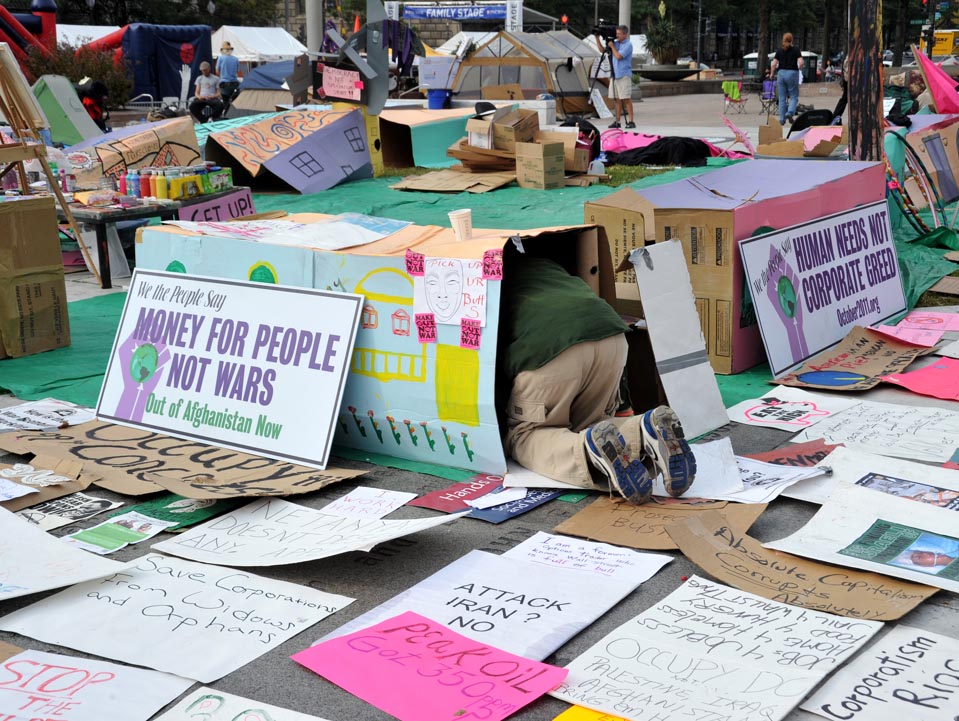 The decision to leave, in the end, was an easy one. I’d applied the economist’s ‘marginal utility’ to the thing, and reached some conclusions. They weren’t pretty ones, but truthful.

First, I was hoping for a more diverse group. Most of the people here are 40+, and while they all mean well, I’m given to believe that there’s no passion in the thing (although some, in deference, are pretty passionate). It’s hit me like the proverbial ton of bricks that Gen Y is simply accepting what’s being handed to them – even if it’s a shitty future from a shitty bunch of political grifters who sold out their futures so a handful of people could sip champagne on a balcony.

The handful of twentysomethings I’ve met here – products, by and large, of the post-9/11 era – have told me stories of their complacent friends and fellows; people who grew up knowing that they can be patted-down, photographed, filmed, spied upon and arrested for ‘suspicion’ of terrorism. These people accept, in the main, this condition as one of the prices for ‘freedom’. The few who’ve connected the dots and who are here can’t believe that their age-related comrades are so apathetic and accepting.

Second, while I could be wrong, I’m of the belief that this entire thing has been co-opted in some fashion by the authorities. A case in point – the other day, about ten people from the Plaza marched on the House Armed Services Committee meeting (seven were arrested). Seven. I’m sorry, but that’s not a ‘protest’. That’s a minor disruption in the day’s business for these people; the Capitol Police, who are in charge of the building, actually outnumbered the protesters without adding additional staff. There are several cops in our number (I discussed this with a number of people who agreed with me that this was likely the case, including one of the organizers, who told me, “But what are we going to do about it?” Having neatly boxed us in by giving us a permit for the next four months, they’ve all but guaranteed that the organizers will behave like the goldfish who are put in a suddenly-bigger-bowl – they’ll still swim in the same small circle. Now that the park is theirs, the organizers will strive to keep the number of protesters within the limits. It’s cheaper on the D.C. police, as I mentioned earlier – they don’t have to house or feed us; we’ve done that for ourselves, and pledged to keep the thing peaceful, so they’ll not have to consider what happens every time a committee comes up with a new march or ‘occupation’. The whole thing begins to remind me of a church-camp. People wander through, reading our signs and seeing how orderly we are – one rather vacuous-looking girl (obviously dressed for one of the local offices and on her lunch break), said “How cute!”

Which brings me to my third reason – there simply aren’t enough of us. We all fit in the Plaza. We all toe the line. We all stay orderly and contained.

This needs to be messy, people. It needs to be chaotic. I’m perfectly willing to get myself arrested – but not for walking down the street and saying, “Excuse me, Mr. Chairman, may I sit here in your meeting? I know these people in blue uniforms will take me to their jail in a few minutes, because I’m going to pull out this sign under my jacket and say ‘No More War!’ – but that’s all right. I’ll be out in an hour after you take my fingerprints and photo, because I’ve got a lot of friends who’ll pull out their platinum Amex.”

Fuck that. That’s not a protest. As I said earlier, that’s a minor interruption.

The authorities are not afraid of us – not by nearly enough.

Those I met – the handful of twentysomethings with no future and the old people who’d seen this before in the past – they’re good people. They Get It. They – and I – are willing.

There just aren’t enough of us. And that scares me.

It scares me because no one appears – at least now – to be willing to do whatever it takes to correct this mess. Most people still believe, in spite of all of the evidence to the contrary, that the electoral system in America really works. Most still believe in the ballot, when the ballot has so clearly been co-opted, as was this protest, by Those in Charge.

There were over a dozen people who sent me notes just before I left for this place a little over a week ago, who said, “I wish I was there with you,” then offered some excuse or another. I said at the time, and I still believe this – you no longer have a choice. If you sit on the fence, you’ve made a choice to stand with the apathetic. If you choose to participate, you’ve made the choice to be a rebel, and to help save your country. It’s that simple. Sadly, most have made their decision.

As much as I’d like to quote Spartacus, and say, “He’ll be back, and he’ll be millions,” something tells me that things are either going to have to get a hell of a lot worse. I’m given to remember that the 1960’s protests, as large as they were, were only marginally successful until 1968, when people proved they were willing to shut down the nation’s capitol and get their heads cracked open in Chicago; Kent State was the galvanizing moment, when protesters were finally killed by Establishment troops – and public opinion, even among the apathetic ‘Silent Majority’ – was finally swayed.

While this era needs another Neil Young and a modern version of “Ohio”, what America needs to understand is that it took Kent State to provide the inspiration.

I’m afraid it’ll come to that.

By: W.D. Noble I’m coming home. The decision to leave, in the end, was an easy one. I’d applied the economist’s ‘marginal utility’ to the thing, and reached some conclusions. They weren’t pretty ones, but truthful. First, I was hoping for a more diverse group. Most of the people here are 40+, and while they…

Joining The Revolution; Chronicle of One Man’s Journey