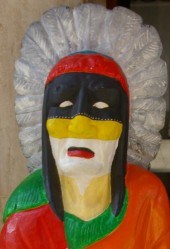 A story to be given ‘in the native story-telling style’.

Let us have a look at the fate of Don Rumsfeld, the colonist who renamed ‘Old Europe’, to be henceforth known as ‘Old Europe’ (he is really bright), and the consequence of Old Europe’s bringing ‘dick’ or the malevolent repressed gay social phenomena called ‘Machismo’, to the ‘New World’…

You’ve all heard of the first grade primer ‘Dick and Jane’? Well, as fate would have it, Dick did not grow up to love Jane, because Dick (like Don) matured into a homosexual in denial, or “RRR” (sounds like a Rottweiler growl), one of those closet morality, socially/sexually frustrated and consequently mean people known as a Religious Right Republican.

Rumsfeld was visiting ‘big dick’ Cheney at Cheney’s ‘spread’ in Wyoming, Cheney was wishing he could have shot George Bush in the face with his shotgun because the coward George flinched and did not pull the trigger on Iran…

While reminiscing missed opportunities at initiating Armageddon, wishing they could have shot more people in the face, especially more Arabs, and about their longing for certain fascists to be in their lives, past and present, secular and religious.. Among other things, Rummy suddenly asked ‘big dick’ why his Rottweiler, “Machismo”, was always locked in his kennel.

Mean people have mean dogs and, Dick explained to Don that “Machismo” had an edge about him; Machismo simply could not be trusted around visitors. Dick went on to explain how he wished it were otherwise and how he wished Machismo could be trusted to obey him and only tear apart people that he did not like, he’d tried dog trainers but they cost him money, too much money, because Machismo took a chuck of flesh out of all of them, every dog trainer he had tried. His insurance premiums had gone sky high, all on account of Machismo.

Rumsfeld: “Why don’t you get a different dog?”

Cheney: “Because I love my Machismo.”

Then Don had an idea.

Rumsfeld: “Hey Dick, there is the Arapaho Indian Reservation right up the road, why don’t you get a Medicine Man to take the edge off your Machismo? I saw on the Discovery Channel the Indians can talk to animals, you know they are all devil worshippers, so maybe there is something to it.”

Dick’s eyes brightened considerably, an amazing thing, as though a light had turned on upstairs, but then his brow furrowed back to normal, as though nobody were home.

Cheney: “That’s the problem. They are all devil worshipers, you know, Indians are sorcerers like the Old Testament forbids be ‘found among us.’”

So Don and Dick discussed that and came up with a solution. If they were not at Dick’s ‘spread’ while the medicine man worked with Dick’s Machismo, the sorcerer would not be found ‘among them’ and it would all be ok in the end, because St Paul had said “All things work together for good” for Christians like Don and Dick. So they sent a Secret Service agent to find a medicine man with an explanation of how Dick would like the edge taken off of his Machismo, and then went quail hunting, so the Indian sorcerer would not be ‘found among them.’

The secret service agent found a medicine man, a Blackfoot married to an Arapaho and living in Wyoming, a typical dumb Indian, who with a look of stunned disbelief, kept asking the agent again and again “What!?” After the agent had identified himself four times and explained Dick Cheney wanted the edge taken off his Machismo eight times, a light filled this Blackfoot Indian’s eyes, this agent was serious, and the devil was right at home.

Indians know when the gods deliver the opportunity of a lifetime, and this was opportunity at redemption. It had been awhile since the medicine men had been noticed, that is, the now days scarce authentic ones, and the agent had stumbled onto the real McCoy. First and foremost, this Indian believed in the Native law of reciprocity and well knew how it worked, something the Whitemen had not sorted out since Jesus had told them about it two millennia ago: “As you sow, so shall you reap.”

In this Indian’s world view, the opportunity was all about deliverance, and the attending attrition from any consequence, a sort of natural quantum mechanics shamanic death manifest by friendly fire, simply would have to be tolerated, because the medicine men are all about manifesting truth, and this native cultural idea taken together with the dogs name, set out the path to healing Dick’s Machismo: The dog would have to be taught how to enjoy narcissistic sex, instead of biting people.

Initially, the medicine man realized he would have to endure Machismo’s instinct to hump his leg, that was disturbing, but to reach the goal beyond… The Indian told the agent, well, ok, he would do it for ‘dick.’ The agent missed the straight faced Indian humor… and utterly failed his agency’s chartered mandate.

Indians are observational people, primarily, and know the purpose of dog butt sniffing rituals, sort of like when a Blackfoot and Cree spot each other from across a boulevard in downtown Calgary, the hair goes up on both backs and both Indians are thinking to the other “You can sniff my butt” in a historical context, and it is not a friendly thought. The actual butt sniffing between them is purely psychic, preceding any challenge and fight, and the medicine man doctoring Dick’s Machismo would need to circumvent this phenomenon to achieve his aims. So sorcery came into play. He collected urine from a bitch in heat, rubbed a little of it on his knee, and bringing more along in a vial, he traveled to heal Dick’s Machismo.

The dog was very happy to see him, no hostility or butt sniffing ritual encountered at all, the Indian told the agent he had to work with the dog alone, brought out a plastic baby rattle wrapped in leather with a few strings with beads, to look convincing, and Dick’s fundamentalist Christian body guard was more than happy to leave. Then this Indian began to work with Dick’s Machismo… “Now Machismo, my leg is a good beginning, but we have to show you something, you don’t need my leg or me at all, you can do this all for yourself- just follow her scent to where it feels so right….”

In Blackfoot language we have a word, I don’t know how to spell it in the Whiteman’s language, but it sounds something like oww-woe-tops and it means you are crazy and “everyone knows the Whiteman is crazy” is a Blackfoot proverb proven again and again, example given, Dick Cheney hiring an Indian that hates him, as every Indian should, to tame his Machismo. There is another Blackfoot word I dare not try to pronounce here, but it means “Dog Face.” It is about as bad as Blackfeet language profanity gets, and it is not as tame as it might seem, initially. The term refers to a certain facial expression…

Don and Dick were headed back to Dicks ‘spread’, the agent had called and told them the medicine man had pronounced Dick’s Machismo healed and was leaving, and as fate would have it, the medicine man, and Don and Dick, passed each other on the dirt and gravel country road, the Indian pushing his 1968 Chevy pickup named the “Red Jet” as hard as he could, the worn out 327 V-8 boiling blue smoke into the dust storm he was whipping up behind him, windows down, braids flying, wild eyed panic combined with a maniacal mirth at his crime, co-mingled with prayers to all the gods that he WOULD escape… thinking when he saw Don and Dick “you can sniff my butt” while trying to put on as many miles as he could, as fast as he could, to escape Dick’s ‘spread.’ Don said “God Damn”, Dick in the same moment saying “he must have brought along his whiskey”…

Dick and Don, walking to the kennel, turned a corner bringing Machismo into view in that very moment Machismo was swallowing it, gulping himself down with a certain facial expression… Don had a sudden epiphany, and he exclaimed “Machismo sucks!”, and Dick’s perpetual grimace of hate torqued down to the point it actually broke his primitive semblance of a mind, he pulled his permitted concealed weapon…

The camera pans away to the beautiful red rock cliffs of Wyoming, there was a first shot echoed together with Machismo’s dying yelp, Don shouted “NO!” and the second shot was heard… a pause.. The third shot sounded and America never heard Dick Cheney say “Terror” again.

The Secret Service agent kept his mouth shut about his role in the cause behind the Rumsfeld/Cheney murder/suicide, and no one came after the medicine man who laughed for years, again and again like a child, every time he recalled:

“You can sniff my butt”

Penucquem-Let us have a look at the fate of Don Rumsfeld and the consequence of Old Europe’s bringing ‘Dick’ or the malevolent repressed gay social phenomena called ‘Machismo’, to the ‘New World’

The Icelandic Accord, contd. Part I

The Islandic Accord Part II