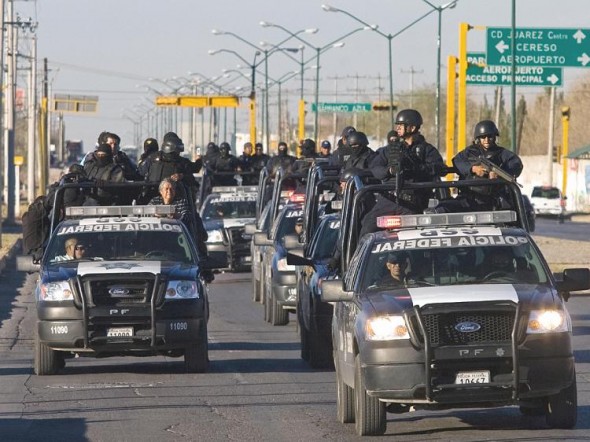 While agreement on both sides of the political fence doesn’t happen often; one thing the US legislative body does seem to hold a unified concord on, is Mexico’s drug problem.  Not only does Mexico have a problem with the illegal trafficking of drugs over the US border, but the resulting war of rival gangs that have shocked the world with their violence are being conducted, in large part, with American arms.  Alcohol, Firearms and Tobacco Control are pushing for stronger measures involving the sales of firearms.  The US Justice Department has announced plans to cut arms trafficking into Mexico by monitoring the sale of assault rifles in border states.

There are a number of things wrong with, not only the solution, but the appraisal.  Mexico doesn’t have a substantial drug problem.  That is to say, the number of people imbibing anything more than distilled cactus juice, alcohol in general, marijuana or hallucinogenic mushrooms, is rather small.  The US clientele is what has made the sales of cocaine, meth-amphetamines and opiates a lucrative trade.  The US has a drug problem, and US clientele fuel the drug trade, finance the drug trade, but is not the reason for Mexico’s all out war.

The American arms being used have been primarily provided by the US Government to the Mexican Government to conduct their war on drugs.  How were the drug lords able to acquire these weapons?  Is it possible they are so powerful, they were able to overcome Mexican Government forces and seize their weapons?  If you have two rivaling factions, both expending manpower and gun power to maintain their position, how much is left for fighting a government whose military backing is funded by the US waged war on drugs?  If looked at simply from the perspective of rivaling gangs, the solution to ending the blood feud does seem simple.  Restrict border passage, erect a wall to prevent illegal immigration, and crack down on liberal gun laws in border towns.

The perspective is flawed.  Logically, would two rivaling gangs be able to fight each other, the government, the US Drug Enforcement Agency,  and the law abiding populace in a country of millions, without some serious back-up?  These are not rivaling gangs, but organized crime, with its roots buried deeply into Mexican politics and Mexican enterprise.

In the year 2008, Condeleezza Rice visited Mexico to give a hand to President Felipe Calderon’s government in its efforts to reduce drug related crimes.  Although the Bush administrated White House had already successfully pushed four hundred million dollars over the border for aid, Calderon declared this wasn’t enough.  In the seceding years, despite the steady support of additional funds, the violence has only escalated, spreading beyond the central conflict around Mexico City and fanning like a wild fire into the border towns.  While this all may seem puzzling to some, there is a logical reason.  The US Government, as it did in Nicaragua, El Salvador and so many other places, was assisting an unpopular president.

While Condeleezza Rice looked around and decided Mexico had a drug problem, she did not take time to notice that Calderon had used US backed military deployment to invade Oaxaca City in 2006 and forcibly remove Mexico’s Revolutionary Party from office, jail or murder protestors, and cut off electrical use, water and food supplies.  She had also failed to notice that Calderon had won the election by a narrow 51% and was publicly accused of using bribery and extortion to win his votes.  The popular favorite was Lopez Obrador, a Socialist candidate and who is still referred to as Mexico’s “legitimate president”. 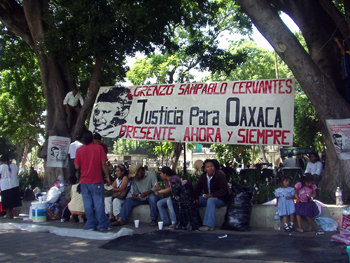 Obrador has some serious charges to take up with Calderon as well as a list of other powerful political figures he accuses of being Mexico’s Mafia.  In a formal complaint filed with the Attorney General of the Republic of Mexico, he states:

“1 .- The group of criminals who denounced have been carrying out with impunity, acts that violate the Constitution and laws of the Republic. There is evidence that this is a dedicated conspiracy to influence peddling, corruption and looting of public assets and resources.

2 .- It is obvious that this mafia has not cared about the fate of the country, much less the welfare of the people. For over two decades, Mexico has been one of the countries with lower growth in the world (Annex 25 ECLAC report on economic growth in Mexico), since 1983 began to dismantle the policy of promoting and generating employment; is left without support to producers in the field, and deliberately neglected the energy sector to ruin and justify the privatization of electricity and the oil industry.

3 .- As a result of this policy of plunder, Mexico today is a country in ruins, whose extraordinary people have been sentenced to survival or to exile. Millions of families are suffering for lack of employment or because their income does not suffice even for the most essential. Many Mexicans are living in crowded conditions, abandoned, sick and without social security. Young people have been canceled their future, they do not have opportunities for work or studies, and have been forced to take the path of antisocial behaviors.

4 .- Also, these characters have taken over all, are primarily responsible for the insecurity and violence that is suffered in the country. Nothing good could be expected to happen when money replaced the social power and the government became a full committee at the service of a few.

The Consequences of Corruption

Morale has been pretty low in Mexico lately.  Over forty thousand drug related murders have occurred since President Calderon escalated his war on drugs.  Only 30 percent of the Mexican voting public currently believes the country is headed down the right path, according to Consulta Mitofsky, Mexico’s most trustworthy pollsters. Ordinary Mexicans’ lack of confidence and distrust in the government and its officials is astounding, even for a typically cynical Latin American populace: In polls, politicians usually rank just below the police forces, which most Mexicans believe to be rampantly corrupt.

Their feelings about Obrador as the legitimate president are mixed.  Some feel he sold out to the leading political parties, PRI and PAN to remain in an influential position as a delegate.  Some feel he is an embarrassment to continue declaring himself Mexico’s true president without any formal documentation acknowledging his elective rights.  With their own elections looming in the same year as the U.S., 2012, the parties are split by the same divisive factors splintering the US Democratic and Republican parties, with the same indifference as to who is at the helm. 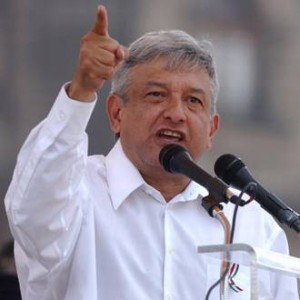 Corruption among law enforcement is great enough that one of the most brutal and powerful branches of the drug cartels is the Zeta’s.  Originally meant to be a special operations, para-military unit in the late 1990’s, they received training from foreign specialists, including Americans, French, and Israelis.  This military group, a Mexican equivalent to the Green Berets, was called the Gafes.   Members of this elite unit, were trained in rapid deployment, aerial assaults, marksmanship, ambushes, intelligence collection, counter-surveillance techniques, prisoner rescues, sophisticated communications, and the art of intimidation. Their arsenal includes AR-15 and AK-47 assault rifles, MP5s submachine guns, 50-mm machine guns, grenade launchers, ground-to-air missiles, dynamite, bazookas, and helicopters.

Their journey from a special op military force to hit men for the drug lords seems to have been a short one.  By the time Calderon took office in 2006, many of this elite force, enticed by higher pay than a government salary, had defected to join the other side.  Unable to trust the police, already accused by the public of corruption, the President placed the army at the forefront of his war on drugs.  The remaining Gafes, still loyal to the government,  found themselves fighting the same people they had trained with, in the form of the Zetas.

It’s not possible to measure the number of people who have sided with or work for, the Zetas.  Although the Army has detailed information about deserters, even key law enforcement agencies must guess at their size and composition because small-time criminals identify themselves as “Zetas” in hopes of exciting fear in their victims. For security purposes, Los Zetas have adopted a cell-like structure to limit the information that any one member of the organization knows about his associates.

Los Zetas have set up camps in which to train recruits aged 15 to 18 years old, as well as ex-federal, state, and local police officers. In addition, they have invited into their ranks ex-troops from Guatemala known as Kaibiles. Reviled as “killing machines,” these tough-as-nails experts in jungle warfare and counterinsurgency adhere to the motto: “If I advance, follow me. If I stop, urge me on. If I retreat, kill me.” 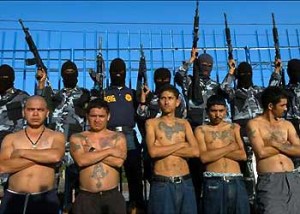 The United States has sent funds, arms and military training into a country run by an unpopular president.  The President of this country has turned these funds and weapons over to a military that has partially defected and a police force nobody trusts.  Many of these weapons have turned up in the aftermath of violent attacks, formally declared as feuds between rivaling drug gangs.  These gangs flourish through the sales of drugs to an American clientele.  They also flourish because their country is poverty stricken and desperate.

While the war on drugs has already cost tax payers an enormous amount of money on both sides of the border, and taken the lives of innocent men, women and children, it has become a handy tool for a US Government that never has been very good at accepting responsibility for its mistakes and poor judgment.  Gun rights activists are angry at the Supreme Court decision to monitor firearm sales in the border states as they feel it’s a way of circumventing the Second Amendment right to bear arms without a Congressional vote.  Proponents for stricter immigration laws need only  point to the violence in Mexico as a good reason for such harsh measures.

For those caught up in the cross-fire, there is no light at the end of the tunnel, no hope in sight, no solution to the rabid machinery that has destroyed their homes, their livelihood and their families.  Only one thing has become clear in this fiasco to promote law-making special interests: You cannot hire the corrupt to end corruption.

Karla Fetrow- The US supplies Mexico with arms and funds, which the government turns over to the military and police, who deflect to join the drug gangs who are financed by American clientele