Nothing but the Truth – an Exercise in Absurdism 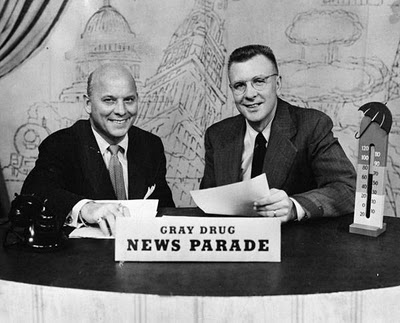 “Nothing but the Truth – an Exercise in Absurdism”

The following is a transcript from a series of news broadcasts aired on the last day of state rule – this footage was recently recovered from the ruins of an old TV station and has suffered severe damage resulting in the loss of much of the original footage.

Anchorman: Our top story today, the new bill in Congress that…

Anchorman: It appears that we have breaking news – we are getting reports from all over the country that federal judges involved in property disputes are making some sudden and startling confessions!  We now go to our reported in the field Tom Simpson…

Reporter: Thanks Steve.  Just minutes ago, over two-dozen judges in at least twenty states have admitted to accepting payments for favorable rulings in property disputes from contesting parties – mostly large corporations and banks looking to foreclose on houses or take possession of land for real estate development.  Furthermore, these confessions seem to be inadvertent: as though the judges just couldn’t help but reveal their secret arrangements.

For example, Judge John Harper, who was overseeing a foreclosure case between an unnamed bank and a holder of one of their mortgages, was reported to say “we might as well not even have these proceedings as the bank has already given me $5,000 to grant them title to the house” when the defendant’s attorney finished making his opening statement.  After this confession, witnesses say that he had a look of horror on his face and suddenly bolted from his own courtroom – afterwards there was pandemonium and several people were severely beaten in the aftermath of this incident.

Anchorman: I’m sorry Tom, but we’re just receiving news of another incident similar to this one – we have just received some shocking footage from a citizen with a cell phone camera that witnessed a police shooting, followed by a startling statement from an officer involved the incident.

*Footage: An African-American man comes out of a supermarket and is immediately gunned down by two police officers – the injured man is handcuffed and then shot again in the back of the head.  A man approaches from off-camera and asks why the officer shot the incapacitated man.  The officer responds “Because this goddamn nigger wouldn’t keep his mouth shut about my son raping his sister!”  A pause follows, after which some one off camera shoots the officers.*

Anchorman: *silent, stunned gape at the camera* Dianne, did… did I just see what I thought I saw?

Anchorwoman: It…  It appears so, Steve…

Anchorman: It appears that this strange phenomenon has entered its third hour – for reasons unknown, political, economic and religious authorities the world over have been confessing their darkest secrets in public: it’s almost as if they can’t stop themselves from revealing the ugly truth at every opportunity.

Anchorwoman: We at channel 27 news have been receiving reports of corporate CEOs confessing to all manner of dirty dealings with government officials during press conferences, law enforcement agents admitting to abuses of power and corruption that goes all the way to the top – even the Holy Father has made a stunning admission that God does not really exist, but rather is a fiction perpetuated by the church for the sake of supporting the lavish lifestyles of the Vatican’s elite and purchasing political favors from politicians!  If these spontaneous confessions are to be believed, our entire society has been based on nothing but lies built upon lies – are we ready to accept such an idea?

Anchorman: We now go to our reporter in the field with a look at the public’s reaction to these shocking events…
Reporter: Steve, the reaction to these bizarre confessions by the leaders of society has incited violence in the streets – for the past few hours, we have been experiencing non-stop shoot-outs with police officers  that have been running for their lives from angry mobs and have seen the lynching of multiple politicians: judges, city council members, the district attorney and the angry mob is far from satisfied – one of the members of the angry mob has told me that he “won’t be satisfied until every last one of the bastards that have been fucking us over is dead.”

Anchorman: Tom, you know you can’t say such words – the FCC will fine our station for this…

Reporter: Something tells me there won’t be an FCC when all this is over Steve – after what I’ve witnessed, I don’t believe our society will even be the same again. Allow me to introduce you to one of these individuals and you’ll see what I mean for yourself…
*Reporter calls out to a crowd of rioters and offers a chance to explain their story to the world – a man wearing a black trench coat and a skull shirt carrying an AK47 responds to his invitation*

Reporter: Good afternoon sir – would you give the audience your name?

Reaper: I hesitate to use my real name here, but you can call me Reaper.

Reporter: Ok then, Mr. Reaper would you tell us in your own words what you and your associates are doing?

Reaper: What does it look like we are doing?  We are ridding the world of the parasites that have overtaken it – and thanks to whatever it is that has come over these mother fuckers we now have all the justification we need to do it as they have condemned themselves with their own words.

Reporter: Don’t you believe that what you are doing is more than a little extreme?  Do you think it would be better for a court of law to determine the validity of their statements before resorting to summary executions?

Reaper: You may not have noticed this, but nearly every judge in the nation has made public admissions of corruption and fraud by now – if we had a trial for these bastards, who would oversee it?  Besides, the court system is anything but fair anyway: the “scales of justice” have always been tipped in the favor of the people that have the more money and social status that the rest of us – the courts would probably just give these bastards a slap on the wrist while sending more of my friends to rot in the hell holes known as prisons for minor possession charges!

What we’re doing here isn’t pretty, but it’s most certainly fair – these pieces of human shit have had numerous opportunities to get off their collective high horse and peacefully surrender their powers to us, but doing such a thing never even crossed their minds: instead they get drunk on power and use it to suppress those who might threaten their interests – like those fucking pigs I shot this morning.

Reporter: So…  You’re the off-camera shooter in that clip we aired earlier today?

Reaper: Damn right I am – I also led an assault on the police station once the chief admitted he had been covering up the crimes of pigs for years.  We took their weapons and burned the fucking thing to the ground!  Now we’re headed over to city hall to hang the mayor: as you know, he has already admitted to dealing with the mafia and rigging elections in his own favor.

Reporter:  Do you here this Steve?  This man may have sounded like an extremist just a few short hours ago, but right now similar views can be found among almost anyone who walks the streets today: this perspective is the new normal!

Anchorman: So…  This is the face of the new world…  I need a drink.

Anchorwoman: Have you no shame?  You can’t do that here!

Anchorman: It’s the end of the goddamn world out there and I need something to settle my nerves – so get off my ass you stupid bitch!

*Footage missing*
Anchorwoman: Steve, no one’s watching this anymore – everyone’s either joined an angry mob or else is hiding from such mobs.  Why the hell are we still broadcasting?

Anchorman: Do you have something better to do?  *takes a swig from a flask*  We’re fucking trapped here thanks to security barricading the doors to the station, so we might as well do something here even if no one else gives a damn!

Anchorwoman: Damn it, I just wish I could get out of here – the whole world has gone nuts!  The Pentagon was burned to the ground, the IMF headquarters was ransacked and its managing director was beheaded, the President was dragged out onto the White House lawn and burned alive; and you know what?  What chills me more than anything about all this madness?  He just kept repeating over and over again “you don’t us and never did, we do nothing but exploit you for labor – we’re expendable” even as the mob was pouring gasoline on him!

Anchorman: Ha!  That was funny – but still not as funny as the Queen of England being strung up as a piñata and getting beaten with tire irons!

Anchorwoman: *Gasps with horror*  Steve!  This isn’t funny – what will happen with the authorities out of the way?  The world now belongs to people like the Reaper guy!

Anchorman: So what?  Say what you will about their bloodlust but at least these people are honest about it – they don’t lie about what they do or why they do it, which right there is a goddamn upgrade from the hucksters that have been running the show to date.

Anchorwoman: But now people have nothing to believe in – nothing will stop them from acting on their violent impulses!  At least the thought of being punished by God or the state caused people to put a check on their base nature.

Anchorman: And those who represented God and the state put absolutely no check on their own base nature – they killed with impunity whenever it served their purposes, you just didn’t see it on the nightly news because people like us didn’t do our damn job!  Instead of acting like watchdogs for the public interest we became lapdogs for power: I just wish I was out there with Tom right now…

Anchorwoman:  No!  Don’t even think such things – after seeing him blow the mayor’s head off I’m never going to sleep again!

Anchorman: Hey, I wish I was the guy with the 12-guage doing that – at least I would have had the chance to make some amends for all the corporate whoring I’ve done in my life!

Anchorman: Well, whatever happens now guys like Reaper can’t possibly fuck things up anymore than the now-destroyed establishment did… *takes another swig from flask*

Azazel: We are getting reports from all over the country that federal judges involved in property disputes are making some sudden and startling confessions! We no go to