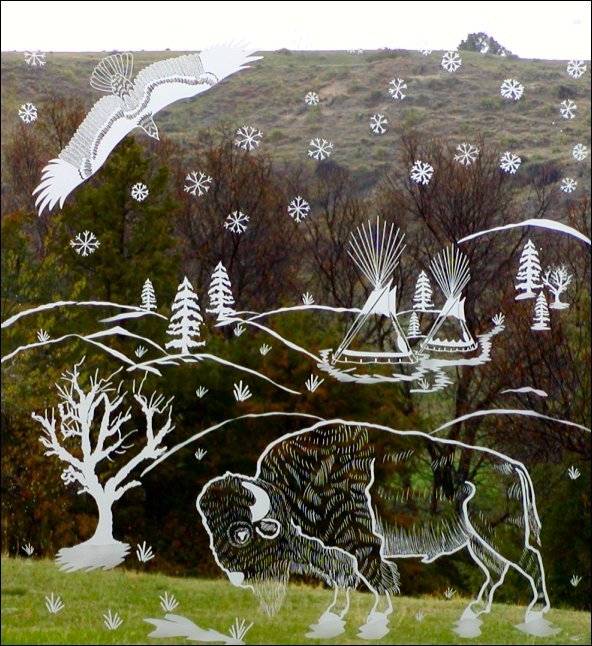 A story of life’s techniques

from Life in Blackfeet Country

My view was of the prairie where it meets the foothills of the Rocky Mountain Front. When the dream came, all trace of western civilization was absent, this earth was unharmed by mankind. I was sitting on the ground, Indian style, facing the South. The wind was steady from the North West, sustained, yet not particularly strong, but with a gentle power, moving the native grasses in a continuous flutter that was perfect to behold. A small sagebrush, five or so feet in front of me, was alive with a supernatural energy that embodied the spirit voice of a nearly black Bison bull, standing, chewing its cud, only a few yards away to the East. For many hours, a time in which I did not become tired, bored or excited, but only knew a sense of well being and completion, the Bison instructed me in the nature of the Holy Woman, the Spirit of the Earth, and the powers of the Sage. Everything was taught in a very old dialect of Indian language that my spirit completely understood. When I woke up, I knew I had the power, the gift of knowledge was true. Now I only had to live my life in a certain way. No harm could come to me before my work was finished.

If the anthropologists were ever to psychologically dissect the so-called ‘Vision Quest’, they could without a doubt arrive at the conclusion that the successful questing individual had experienced a severe episode of ‘psychosis.’ A medicine man that was schooled in the Anglo concept of psychology could easily describe a successful vision quest as the ‘Big Psychosis’ without experiencing any of the negative contexts of the term and without feeling compelled to prescribe anti-psychotic drugs. Au contraire. In the Medicine Mans’ world, one prepares for the Big Psychosis as a matter of transformation to a more complete and evolved being.

The only real qualitative differences between the Anglo psychosis and the Indians ‘Big Psychosis’ is the Indian expects it, is not afraid of it, plans to come out of it, and will spend the rest of their lives learning from it. Consequently, the embraced Indian memory of the event allows for a semi-psychotic vision or ability to see, ever thereafter. In other words, the event embraced rather than suppressed, allows for the utility of the right hemisphere of the brain in the waking state via an exercised subtle shift in consciousness, post Big Psychosis. So the successful quester can‘dream state’ at will. And the Indian understands and recognizes this state for what it is and can differentiate between this state and a more ‘normal’ state. This is how the Medicine Men ‘see’ and are able to diagnose or divine, and come up with insightful answers and solutions to peoples problems. Effectively they have learned to read and heal peoples psyche, and the psyche takes care of the body.

Typically the quester is instructed, sometimes for years prior to the event, in preparation. The quester is informed that the ‘evil ones’(your ego, fears and everything in you that is ugly) will manifest first and you must remain steadfast against these things in order to accomplish arriving at the place of learning in your vision. For the true quester, actual psychosis is induced through thirst, hunger and privation and its attending chemical imbalances in the body. Via this artificially acquired near death experience, the ego breaks down and allows for what would have been previously abnormal traffic to occur in the brain. Barriers have fallen. Fear dies in your consciousness. Then the waking and dreaming states intermingle. You remember your training for this event and must remind yourself that to follow the initial fantasies and move from your  perch on the mountain precipice is lethal. These first fantasies are the false dreams. You sun and wind burn in the day and freeze during the nights. But if you are lucky, if you are strong and persevere, you will see something bigger, and begin your journey on the road to knowledge. This is when the Sovereign I, the real self, your greater potential, manifests in the archetypal beings who instruct you in the ways of superior consciousness. This is your vision. Then you will be tested. That is your life that follows.

My own fast was on the cliff of a mountain overlooking Badger Canyon just north of Heart Butte on the Blackfeet Indian Reservation in Montana, during the spring of 1978. My Big Psychosis lasted days, even weeks after I came off of the Mountain. I slipped in and out of an altered state as my learning circumstance demanded, and I finally came to settle down in a more ‘normal’ state after an incredible adventure (following story.)

It was my old people, Alfred and Agnes Wells that set up my ‘Big Psychosis.’ Where I stayed with these old people, Badger Canyon and Heart Butte area were, up to the 1970’s, an isolated pocket of the old Indian world, far off the beaten track and had been accessible only by primitive dirt roads, old wagon roads, barely improved by the sparse grading of the trail. For much of the 20th century Heart Butte was literally cut off from the rest of the world due the primitive nature of access- winter with the roads drifted over with snow, and then high water making the fords these barely improved old wagon trails traversed impassable for stretches that lasted weeks on end. Long after the rest of the Blackfeet Indian world in Montana had been caught up by western civilization, largely due to this reservations proximity to Glacier Nation Park and the easements across the reservation of US Highway 2 and the Great Northern Railroad, Heart Butte had remained an off track and isolated hamlet largely untouched by the outside world. 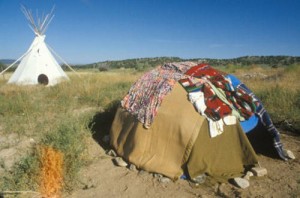 Here as a young man I discovered a world that was populated by people whose psyche had changed little since the days of their great Chief Three Suns, who had the difficult task of bringing his“Pagan” (the Baptist minister/Indian Agent of those days hated this man) band of Blackfeet into the captivity of the Whiteman. Settled into what became the village of Heart Butte, these people were luckier than many Indians, in some respect, not only were they camped out long term in close proximity to their ancient holy sites, the abode of their Heroes and Gods, they were also pretty much forgotten by Washington DC, and ignored by their Christianized fellow tribesmen that ran the Tribal Headquarters at Browning, Montana. So other than the few military veterans that domiciled in the village* and had seen the outside world in its larger context, here was a village population with a very cursory and out of context English language education, and little had changed socially for nearly a century. These people had remained Indians. The medicine men still pantomime for Holy Hand game as the power animals they became in that ceremony, and in the other, related game, called stick game, the sorcerers (‘Witches’, as Floyd Heavy Runner describes them) practiced their open field combat with magic and spells as the game leaders attempted accurate divinations through the blocking spells protecting the ‘bones’ while power songs and hand drums made it all but impossible to hear during the big games at the stick game tournaments in Heart Butte’s little ‘Round Hall.’ In the surrounding area, there were a few truly wicked sorcerers who whiled away the years taking‘shots’ at each other, entertaining themselves with the powers they still knew from the generations of Indian magicians of the past. And it was through a circumstantial experience with this last, evil genius, that I first employed the power my ‘Big Psychosis’ had bestowed on me.

*A couple of young white women from the outside once accosted by chance one of these Heart Butte veterans of the Korean war and asked him how to find the house where I stayed in this hamlet of 400 or so people. He told them with a straight face something like “Ron lives up on 103rd Street by the Civic Center.” When the girls burst out laughing, he smiled and gave them proper directions.

Ronald West- In the Medicine Man’s world, one prepares for the Big Psychosis as a matter of transformation to a more complete and evolved being. The Indian expects it