A Letter From Sunny Guantanamo Bay 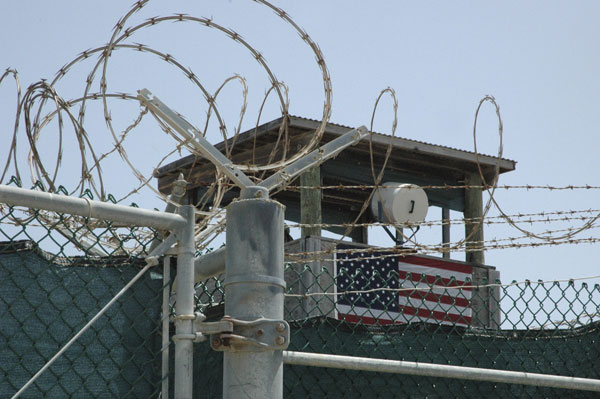 Good evening from my cage, here in Occupied Cuba, with the bats flying home for the evening, and the warm night settling around me. Such a nice warm night, so different from the cold of home. Don’t you wish you were here when you look out of your window?

You do? Well, not all of us can be so lucky.

Yes, this is indeed a holiday. A holiday, here in Guantanamo Bay.

Yes, Guantanamo Bay, where I was renditioned in a top secret operation last night. My captors came in the dead of night, tenderly wrapped me in a padded strait jacket (all the better for me not to hurt myself with) and sent me on this nice, all-expenses paid, holiday. I don’t know what I did to deserve this good fortune. I’d never have been able to afford to visit the other half of the world, and they’re bringing me here without my even asking! Truly, they are kind.

So: here I sit, in the chic orange jumpsuit my hosts have so kindly given me; a vast improvement on the white clinical coat I am accustomed to spend my days, I can assure you.

My guard is a nice guy; a very nice man indeed. Just now he was here and informing me to shut the fuck up. I responded that since I wasn’t fucking I couldn’t oblige, so could he please provide me a woman, or at least a blow-up doll, I could fuck so that I could shut the fuck up? I really don’t know why he went off tearing his hair in anguish.

But then I really think the poor man has problems. This morning, just after I arrived, he told me to behave or else. Or else what? I asked. Or else, he said, he’d knock my block off. I looked around, and I didn’t see any block. Not a block in sight! When I said that, he grabbed my head, pushed it between my knees, and pressed his knee into my back until it creaked. When he let me up again, my old backache had entirely disappeared. And when I thanked him, he began to cry.

Now you know I have this weight problem. And these people here have very kindly decided to restrict my diet so I can slim down. Accordingly, I’ve only got a biscuit to eat today, and a glass of water, in which I could see some tiny creatures creeping around. Live protein; see how kind they are? And water only, that will help cure me of alcoholism as well, won’t it? They’re treating me very well indeed.

And so, you’ll see a revitalised, slimmer, non-drunken Bill after they let me out. Whenever that is.

Then, there was this theological discussion I had with some of them. This happened in a nice, congenial setting where I was given a bath, with no effort on my part. I didn’t even have to walk to the bath. They took me there on a trolley, lying serenely on my back watching the clouds float by. Then they tenderly secured me to a board and pushed me gently into a tub full of water. It’s certainly not their fault that I initially feared drowning. Soon enough I managed to control my breathing reflex, and I am sure that a few more sessions and I will never be able to drown. I may even learn swimming!

Ah yes, the theological discussion. After the bath, these kind gentlemen sat me down in a chair and strapped me to it in their desire not to have me fall over. I wasn’t going to, but it shows their concern. Then, one of them offered to cram my Koran down my throat. Since I did not possess one, it was something he could not do, and I informed him of it. He kind of goggled a bit and then told me my god was a stone. I told him as far as I was concerned my god was stoned, all right, stoned to the gills.

One of the others then informed me that I was a hook-nosed camel fucker. Unfortunately, I’ve never had any direct experience of camels, but I asked him to provide me with one so I could fuck it and see what it felt like. The only thing I asked was that it ought to be a female camel, since I’m not gay.

Also, of course, my nose isn’t hooked. So I asked if he’d be kind enough to lay on plastic surgery as well. I don’t know why he looked so unhappy. I was only trying to be helpful.

He then went off muttering something about interrogation techniques. Then they put me back on the stretcher and wheeled me back here, another guard pushing my head down carefully so I didn’t strike it on the lintel of the cage door.

Yes, careful of my safety, they are!

Then there was this nice large dog that came up and smelt me. I’m sure he liked what he smelt, because he wagged his tail and began jumping on me. I don’t know why the soldier with him was kind of upset and dragged him off. All kinds of weird people in the world, I suppose.

Ah, did I mention the dark hood they put on my head so the lights don’t bother me? I can sleep so nicely now. Pity about the guard sobbing in the background. Why is he sobbing? I don’t know.

After all, I just told him he has halitosis. Is that so bad?

He needs help, I tell you.

Bill the Butcher- I don’t know what I did to deserve this good fortune. I’d never been able to afford to visit the other half of the world, and they’re bringing me here without my even asking!