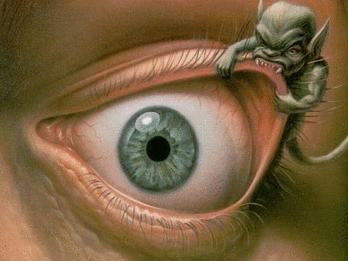 A hurtful act is the transference to others of the degradation which we bear in ourselves.
— Simone Weil

Transference is one of the cornerstones of psychoanalytic theory. Literally whole libraries could be filled on what has been written on transference, so it would be hard to give a simple and straightforward definition without falling into the trap of oversimplification. But that’s never stopped me before right?

Transference is important when attempting to understand online behavior/ relationships and relationships in general because the potential for transference is huge. For example, one year, I was able to organize an online group for a weekend in NYC. Over 100 people participated. People came from as far as the Artic Circle, Australia, Germany, California, Puerto Rico, Florida, Hawaii, and Texas, just to name a few places. We had a great time. However, there was a small group (that didn’t participate) that began accusing me of the most ridiculous things. I was shocked when it was brought to my attention that at least one or two people were spreading the rumor that I was hypnotizing people!

Simply put, transference is the tendency to recreate in our current relationships the patterns of thinking, feeling and behaving that were formed early in our lives, most importantly in the relationships with our parents and siblings when we were children.

Let’s do a quick exercise:
Think of your significant other, or a present or former romantic relationship, or even a close friend (even me!). Think about some important personality characteristic of that individual — a characteristic or trait in that person to which you have a strong positive or negative emotional reaction. Now think about one of your parents, or perhaps a brother or sister. Do they have that very same characteristic, and are the reactions you have to that aspect of them similar to those concerning your current close relationship?

I don’t need an answer… it’s an exercise. I’m just trying to better illustrate a concept.
I’m no Freudian (who is?) and one of the more salient critiques of psychoanalytic theory is that it places too much emphasis on the effects of childhood and family dynamics on the evolution of one’s personality. I happen to agree with that critique. Certainly, one’s personality continues to develop and change throughout the lifespan as a result of our friends, lovers, and new life experiences. It is not solely determined by how our parents raised us as children.

While we are not simply the products of our families, it still stands that our parents (or other parental figures) and siblings did indeed spend a great deal of time with us during our formative years, when our minds were young, impressionable (i.e., most “plastic”), and eager to learn about how we humans relate to each other. Based on our relationships with them, we created maps or templates in our mind about what makes up the expected ways in which people will behave in relationships. Empirical neurological research seems to bolster this claim: Our neurology is like a feedback loop and there is a strong “neurological imprint” created in early childhood. In other words, how we are nurtured has a direct impact on how our brains are formed, which synaptic connections are created, and in that way we are literally created.

We formed basic impressions about the kinds of needs, wishes, fears, and hopes that shape relationships and our image of ourselves in those early relationships. Often we don’t realize these are our maps. They may be (and often are) very different than the maps taking shape in the heads of other people. I had a good childhood friend of mine who was Irish-American and he was shocked and even surprised at how demonstrative my family was emotionally. He came from a family that rarely indulged in public shows of affection. I’m not pointing this to say his was a better or lesser upbringing, but to show that his expectations in relationships would be different from mine.

As we continue to develop we take these maps with us and, operating at an unconscious level, they affect the choices we make in the kinds of people we get involved with as well as how we experience those people. For example, think of your first boyfriend or girlfriend, and how similar that person might have been to one of your parents (usually your opposite sex parent). This is expressed in popular culture: there was the song that claimed the man wanted to marry someone just like their mother, for example. We often attach parental-like labels to our loved ones (such as yelling out while in the throes of sexual bliss: “Who’s yo daddy, now?!!”).

These maps also shape how people select and experience things in their lives that are not human, but closely speak to our needs and emotions that we want to instill them with human characteristics. As humans we can’t help but personify the objects of the world around us. It’s in our neurophysiology. We use our internal maps to humanize and shape our experience of cars, houses, pets, and yes, computers.

Yes, I said computers. Computers can be a basic object for transference because they may be perceived as human-like. Unlike TV, movies, or books, computers are highly interactive. We ask them to do something and they do it — at least, they usually do. With the new generation of highly visual, auditory, and customizable operating systems and software applications, we also have a machine that can be tailored to reflect what we expect in a companion.

Computers, especially when used to access social networking sites, are especially enticing objects for transference because they are vaguely human in that we believe there are humans at the other end attached to the computer. We develop relationships with people, read their “text,” look at their imagery, and then create an picture of those individuals. However, without ever meeting these people, where do we fill in the gaps? We fill it in from our experiences, our assumptions and expectations — especially our early childhood experiences and subsequent important experiences. In short, we transfer our inner maps onto the text we’re reading.

One of the first things I discovered as a therapist was that if I maintained a relatively neutral posture with my clients, the clients would begin to shape their perceptions of me according to their internal models from childhood. When faced with an indistinct, seemingly malleable “other,” we automatically fall back on our familiar mental maps about relationships and use those maps to shape how we think, feel, and react to this new, somewhat unclear relationship. This whole process often is unconscious. We are so used to these old maps that they automatically start to mold our perceptions and actions without our really thinking about it.

If you don’t know me except for what I divulge here, then how can you attach any personality characteristic on to me? Sure, there are actions that take place via cyber space: people meet, have sex and sometimes play out those interactions (sometimes in very ugly, humiliating, and public ways). But I am not one of those individuals. All you really know about me is what you read here. Everything else is made up — by you. Sure, I certainly hope that my wordsmithing is good enough that I am able to communicate insights, and it is true that I very often  share my own inner processes (the how), if not my inner content (the details).

However, that still leaves huge gaps. You don’t know me; you’re not familiar with the experience of my foolish grin, or my wicked, totally inappropriate humor. Yet, according to people I have never met, I am a hypnotist, a racist, a sexist, and a pedophile (there are more, it’s hard to keep track). But are any of these labels true? No one here can attest to the validity of any of these labels, they are actually projections — transferences — of the people doing the finger-pointing. In effect, the individuals who go through extremes are merely expressing their own experiences as filtered through their transference.

In this way, a woman suffering from low self-esteem who was physically or sexually abused by an alcoholic father may react disproportionately to something I might write about sex. To her, I am a pedophile. There is no corresponding action to corroborate her hysteria, except for the action taking place in her mind. Furthermore, transference can be used to understand how persons play out there sexual lives in often humiliating and public (online) ways. How many of us have witnessed a real life meeting gone awry and the subsequent blogs detailing those meetings?

Or, if I write about racism, transference may compel an individual with unresolved issues in that area to accuse me of being a racist (this last one is very common). The same can be said about anything we write. When you attach a personality characteristic to someone you’ve never met, you’re actually saying more about your own experiences than anything even remotely resembling reality.

Those who demonstrate the most transference are the first to label it as “psychobabble.” However, I would submit that transference is important for understanding online interactions because the experience of the “other” person often is limited to text, there is a tendency for the user to project a variety of wishes, fantasies, and fears onto the figure at the other end of cyberspace.

Eddie SantoPrieto- Transference is the tendency to recreate in our current relationships the patterns of thinking, feeling and behaving that were formed early in our lives

The Value of Life and Death