The Waterfall at the Edge of the World 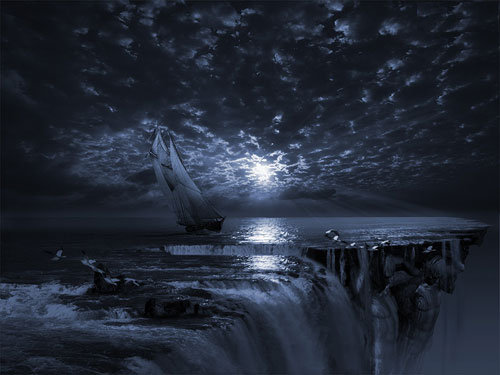 “I will not vote to increase the debt ceiling.”
—  Michele Bachmann

As I write this, the United States is a little over a week away from the financial equivalent of Hiroshima.  Absent a miracle now, the U.S. will fail to raise the debt-ceiling (something which Congress is required to do if they want to go on borrowing money), triggering a default on interest payments on current debt and bringing the entire American government to a hard stop.

From Iraq and Afghanistan to the local National Guard armory, American military personnel will not be paid.  Social Security checks will not go out; domestic organizations from the Post Office to the local Department of Agriculture and FDA inspectors will cease work.

For their part, the Tea Party types in Congress have made it clear (Bachmann being their unofficial leader-of-sorts) that they will not vote to increase the debt ceiling, no matter what sort of ‘deal’ gets made in Congress between now and then.  They’ve not made a statement regarding perceived consequences; perhaps they really just want to see the pretty fireworks when it all implodes, or (most likely) they just don’t fucking know any better.

Meanwhile, the Federal Reserve is making contingency plans – there are at least some who see the truth, and they’re engaged in the moral-equivalent of the citizenry who spontaneously went to the outskirts of Saigon to dig tank-traps in the spring of 1975 while their government told them to ‘remain calm’.

I don’t know whether to laugh or cry.

So, what are the consequences?  Let’s take a look.

First, our debt-rating would be downgraded.  Already, three credit rating agencies have stated flatly that our coveted AAA debt-rating could drop to the status of junk within days.

Second, the stock market could collapse.  (Now, I’ll warrant that this has less impact on Joe Average than you might think – most 401K’s are history, thanks to the recession; the only people who own stocks are that sliver of the middle-class which survived, and the wealthy) – however, there’s an immediate effect on things like employment when a company’s stock loses 90% of its value overnight.

Third, you’d start seeing dominoes fall in a hurry.  Stocks get hit; employment gets hit; everything from the local grocery to the corner sandwich-shop go out of business.  In fact, most things would grind to a halt.

Fourth, everything in America would likely double in price overnight.    Stating that we’re no longer going to pay our bills is sort of the ultimate ‘fuck you’ to the rest of the world.  Anything we get from overseas (which is a lot) wouldn’t show up for fear of nonpayment; anyone sitting on goods would likely hoard them against payment in something which had value (either trade, or gold/silver).

Speaking of gold and silver, count on those going through the roof.  Gold is now at $1,500+/ounce; that set an official dollar-for-dollar record recently, but not a real, adjusted-for-inflation record – it’d have to reach $4,500+ in today’s dollar to do that.   There’d be nothing to prevent that from happening.

By the time all of these things happened – and they’d happen at unholy speed – we could start looking for serious civil unrest.  (If you like the genre of future-history, you can go here and read a piece I wrote this past spring regarding just such a scenario – it begins with a default by one of the nation’s largest states).

There’s a better-than-even chance of balkanization if we get to that point – and there’d be little the government could do to stop it, because the military, National Guard stipends, and most of the nation’s police-forces’ salaries would stop immediately.  (History’s on my side here with plenty of examples of soldiers not showing up for the particularly dangerous work of putting down domestic insurrections when they’re not getting paid.)

At this point, it’s anyone’s game.   Most people who start revolutions expecting to have a semblance of control don’t quite realize that when ‘power lies in the streets’, everyone is a leader – and when they all show up to the party, no one is in charge.

Obama has the habit of entertaining nuclear-options (remember, he and Bernacke cooked up the whole quantitative-easing thing late last year as a means of injecting money into the economy when the banking bailout didn’t work) – and it’s quite possible he could simply invoke the Constitution and his oath to ‘preserve, protect and defend’ by way of issuing an executive order to raise the debt ceiling.

While this would make the problem go away – at least, until the next election – it would send a clear message to the rest of the world that our government was permanently  broken;  cries of ‘Dictator!’ would be heard from the far Right, and in this case, they’d be partially correct.

Polarized and incapable of making a decision, Congress may well be handing Obama something he doesn’t want and no sane person would contemplate unless disaster was looming.  With their simplistic and skewed understanding of economics and politics, the Tea Party faithful in Congress are behaving now like a gaggle of schoolboys in a room ankle-deep in gasoline who’ve all-of-a-sudden decided that playing with a lighter is a good idea. A default at this point would cost the American economy 10% of its GDP outright, sending us into a depression-with-a-capital-‘D’. Obama is losing his support-base over his bizarre stance on Social Security and Medicare, and now Bachmann and her Teabagger minions are already clapping, anticipating the fireworks.

Meanwhile, no one is at the helm of the Ship of State – and no one hears the vague rushing sound of the waterfall at the end of the world.

W.D. Noble: American military personnel will not be paid. Social Security checks will not go out; domestic organizations from the Post Office to the local Department of Agriculture

The Greatest Generation Speaks Up: “Hands Off our Social Security!”