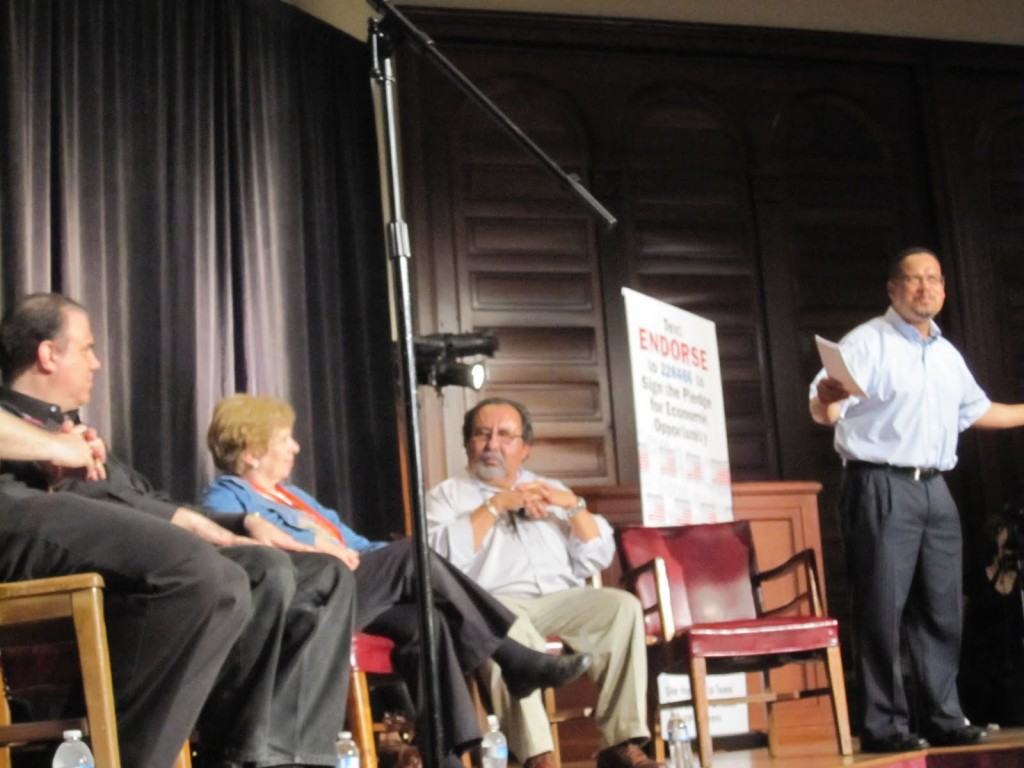 At the Minneapolis Netroots Nation convention of progressive bloggers last week, the main focus was on America’s current crippled job market, our current high unemployment rates and the desperate need to create new jobs here in America (not offshore) — and as well it should be.

First Howard Dean spoke, and here’s what my notes say that he said:  “We are still all about electing Democrats to Washington.  But once they get there, however, we need to hold their feet to the fire.  We, not the people in Washington, are the only ones who can make the change we can believe in.  And we need to be working toward a vision bigger than ourselves — community, security and liberty.  We need security from the need for foreign oil, and freedom from religious bigots telling us what to do.”

Yes, Dean actually said that.  He actually called out the religious bigots — instead of pandering to them like Palin, Bush and Gingrich have done.  No wonder the corporatists and fright-wingers fought so hard against Dean getting elected in 2004.

“We can’t count on politicians to stand up to the monied interests.  So we must do it ourselves, building a small-picture movement based on a big-picture vision.”  And part of that big-picture vision is one where America doesn’t eliminate and/or outsource its jobs. 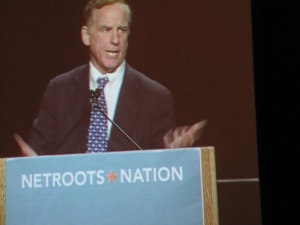 Then Senator Russell Feingold spoke next.  “There is too much corporate dominance in America today.  But corporate power has been rocked by the internet — and they were terrified that we might stop the flow of soft money campaign contributions and fiscal deregulation.  Then along came Citizens United and now we’ve been taken back to the old Gilded Age of the robber barons — only it is now a Gilded Age on steroids.  But together we can stand up to corporate power.”

Yeah.  And we can bring our outsourced jobs back home to America too.  You can’t stand up to corporate dominance quite as fiercely if you don’t have a job.

No wonder the corporatists and the fright-wingers fought so hard to get rid of Senator Feingold.  He represents us — not them.

Then I took a bus ride back to where I was staying over on the other side of the Mississippi River (which, BTW, runs right through the middle of Minneapolis) and I got to chatting with the bus driver, who also held down another job as a firefighter.  “I work two jobs,” he said — and boy was he pissed off about all the recent forced budget cuts to municipal services.

“Your firefighting job is in danger?”

“Yes,” he said.  And that was a very definite YES — a very angry-sounding yes.  “I’m tired of bailing out Wall Street and financing endless wars.  What do people think they’re going to do if their house catches on fire?  Call a banker?  Call 911 and have a war-profiteer show up?”

Yeah.  So.  Jobs.  After listening to various speeches at NN 2011, talking to various other bloggers from all over America and hearing the sad tales of several local working men and women, I was starting to get the idea.  Many private-sector jobs have been outsourced overseas already and now public-sector jobs are in danger.  America is becoming a nation of the rich and the poor. 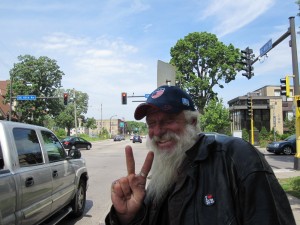 And speaking of being poor, I also had a long talk with a local homeless guy.  “I like being homeless,” he said.  “It makes me feel like I’m free, that I’m my own man.  I sleep out under the stars.”

“But what about during the winters?”  Winters are apparently rather fierce in Minnesota — ten degrees below zero for weeks on end.

“Then I just ride the buses all night.”  It’s a good thing that this guy likes being homeless — because he can set a good example for the rest of us who may be facing involuntary homelessness pretty soon.  We all could be like him in a couple of years if the corporatists and their fright-wing minions have their way.

Then Rep. Alan Grayson gave a speech and he really brought the problem of America’s lack of jobs into focus.  “There are five things that you need to be Middle Class in America.  You need a home, a car, a pension plan, healthcare and a job.  And the Republican party refuses to support anything that will help you get any of these five.  And right now you only have three friends in life:  God, your mama and the Democratic Party.”  And, apparently, you only have the Democratic Party if you hold its feet to the fire.

No wonder the corporatists and fright-wingers worked so hard to get rid of Grayson too.

There were other speakers on Grayson’s panel, including Rep. Keith Ellison and Rep. Raul Grijalva — on the first leg of a nation-wide  tour.  And each speaker gave us a a verbal snapshot of the pathetic state of America’s current job market.

I forget who said what during this panel but here is the gist:  “This is a war between the greediest people on the planet and the rest of us.  If we take this message out to America, however, we WILL win!  It’s time to stop the politics of scarcity and go for the politics of generosity.  There IS enough for everyone.  We need to make jobs the main issue.  If you’re not talking about putting America back to work, then you are talking about nothing.  It is NOT okay to destroy personal lives just to make a profit.  That is the definition of evil.  And these are the people who are in charge of America today.  The priorities in Washington DC need to match the priorities in the rest of America!”

Rep. Grijalva then added, “Various hot-button issues have been used in a very cynical way to divide America from the good of the many to the good of the few.  The next election will define our nation for generations to come — and we must define America for the common good.”

The top one percent of people in America just got ten percent richer, I was told.  And the rest of us only got threatened with unemployment.  Screw that.

PS:  I also want a job!  Does anyone out there have any use for a 68-year-old unemployed blogger? 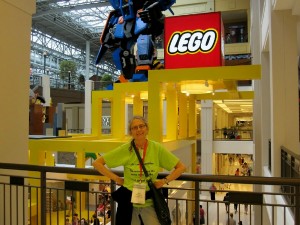 PPS:  When progressives talk about jobs, we are talking about REAL jobs — not just the phony jobs that corporatists are always campaigning about but which in real life turn out to be only more low-paying jobs performed by prison inmates or more jobs sent overseas or more jobs where billionaires only need apply or jobs only for corporatists’ relatives or simply just more TALK about jobs.
****

From Woody:  That famous quote from President Eisenhower, in a letter to his brother Edgar written on November 8, 1954:

Should any political party attempt to abolish social security, unemployment insurance, and eliminate labor laws and farm programs, you would not hear of that party again in our political history. There is a tiny splinter group, of course, that believes you can do these things. Among them are H. L. Hunt (you possibly know his background), a few other Texas oil millionaires, and an occasional politician or business man from other areas. Their number is negligible and they are stupid.

Jane Stillwater: With firefighting jobs in danger, what will we do if our houses catch fire? Call a banker? Dall 911 and have a war-profiteer show up?