There was never a moment’s rest.  Madama leaned back in her chair and rested her head in her clasped hands.  Around her blinked the little red lights of Consolidated Ursa Communications Network.  It was always something.  If Rene wasn’t smuggling his elixirs to the chemically unadulterated worlds, the marmots were opening pathways to the underground or the snow makers would start rioting, creating blizzards during the floral display season.  These tantrums disturbed the tourists.

Everything disturbed the tourists. Last year, it was the twenty-nine flashing tundra ogres.  Sheriff Whiningood felt the ogres should be banned from the colony.  After all, they were the ones who stole five placards for the winter aurora exhibits.  The show that year was very dismal and the tourists complained.  If her girls hadn’t pleaded for leniency, she probably would have turned the ogres over to Sheriff Whiningood to be transferred into a residential area.  A sofa and a refrigerator full of beer ought to settle them down for awhile, but the girls all thought that was too miserable a fate for the rare variety of tundra flashing ogres.  Madama always listened to her girls.  The services of her girls were to make people happy.  If the girls weren’t happy, they couldn’t do their job very well.  She frankly couldn’t see what the girls saw in the ogres but she had her suspicions after seeing a few flash.

She would have to go into the war zone.  She came to this decision reluctantly and with some resentment.  After all, these were wild salmon.  Why did the tourists think she should domesticate them?  It wasn’t her fault one flew through the air last year and snatched up a tourist’s toy poodle.  The tourist was livid with anger.  “Is this what you allow your wildlife to do?”  The tourist, whose top notch matched the poodle’s,  asked as the hapless animal  floated upriver in the jaws of the leaping salmon.

Madama gestured helplessly.  It wasn’t that she allowed them but she always thought the idea of wild was to leave them to do what they wanted to do.  Apparently not.  The rebellious marine life would have to be taught a few lessons in domestic diplomacy.  She called to her secretary and general assistant, Delta Dawn, to pack their bags.  They were going fishing.

The carnage at Keen Eye River was far greater than she had expected.  The salmon weren’t just fighting among themselves.  They were lined up at the banks, taking pot shots at the tourists.  Something very fishy was going on.  The salmon were grabbing the hooks thrown out to them and were spitting them back into the eyes of the fishermen.  They had also confiscated the lead sinkers.  Holding them in their mouths, they lurked along the shallows and spit them out wherever they could find a victim.

The horror story grew.  The boats coming into dock were battered.  The fishing crew told how the salmon had organized in swarms and beat on their boats.  They said even the crabs were showing deviant behavior.  Instead of pulling each other down into the pot, a cultural practice all crabs had in common for keeping each other down, they were helping each other out.  This was serious. It meant a master mind was at work.  Madama placed an immediately cell text to Rene.  She needed his expertise immediately in dealing with the rampaging sea life.

Rene arrived as quickly as necessary for someone who needed her umbrella of protection to stay out of trouble.  He brought his counterfeit Captain’s license and was soon commandeering a sixty-five foot schooner.  They headed bravely into the Bristling Bay, which is filled with stalking sea lions and illegally puffing puffins.  There, in the boiling mirth of bellowing Belugas and uncensored halibut, they saw a terrible sight; an entire fleet of fishing vessels with broken masts, damaged hulls and absolutely no Internet.  “It was terrible,” said one of the shipwreck victims.  “They came in droves.”

“I always said it was a bad idea to allow them schools,” groused another who had never been very keen on education in the first place.

Rene, who had a very good investigative eye, scowled.  He picked up a red Chinese take out container from the deck, the only evidence the attacking salmon had left behind.  He carried the box over to Madama.  “It smells like pork.  This isn’t a salmon king preference.  I’d suggest this is the work of the great fur-seal pike.  A rare and ambitious creature who likes to swim in political circles.  It will take a lot of cunning to end his spin.”

“We could bait him with some pork barrels,” Madama suggested.

While searching the fishing vessels, Rene discovered thirty -five pork barrel loopholes.  The fishermen had not even known they were there and speculated on the practical uses they could have made of them.  However, there was no time to dwell on past issues.  For the good of the whole, the pork had to be sacrificed. 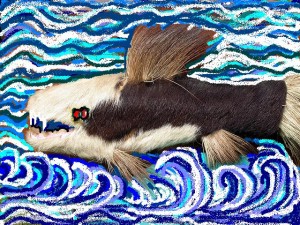 For three days the schooner waited, its pork barrels attached and floating in a sea of tranquility.  Only patience catches the big fish.  The patience of Madama and crew finally paid off.  As they  fended off the sharks, the barracudas and the small nibblers, the great fur-seal pike appeared.  It was the most hideous creature ever designed to live in the ocean.  A relative to the great northern pike that eats everything in sight, the fur seal pike had an additional vanity.  It was covered with the same coat as the fur-seal.  This looks very fine on the sleek fur seal, who has good grooming habits and a strict diet, but on the indiscriminate pike, it was a horrible fashion statement.  His coat was a lac-luster, yellowish color with brown spots.  It emphasized his cavernous mouth and beady eyes.  He didn’t seem to care that his appearance was scandalous as he swallowed one pork barrel after another.

The weight of the pork made the pike grow more and more lethargic.  He began swimming in smaller and deeper circles.  Rene waited with a harpoon.  As soon as the pike was swimming in circles so tight he couldn’t tell his head from his tail, Rene delivered the shaft.  Now, never believe that picking a fight with a pike who has been swallowing pork barrels is going to be an easy battle, not even with a vital point.  This fur bearing pike let out a holler that was heard from Atlastaland to Prince William; which to this day is called the Prince William Sound because of that strange echo.  It twisted, it turned, it flipped every way but loose, then shot straight out into the sea with Rene and his harpoon trailing behind it.

Madama thought she’d seen the last of Rene.  When six weeks had gone by without his return, she began to mourn.  She had gotten him out of a lot of scrapes, but he had always been her most useful business partners.  She had almost given up all hope when she saw him; dragging into shore like the old man and the sea, a twenty-seven foot fur seal skin in tow.  The entire fishing community came out to rejoice.  It had turned out that the great fur seal pike had indeed been the master-mind behind the marine rebellion.  Without his mental control, the crabs began pulling each other back into their pots and the salmon continued just being wild salmon; a little rowdy at times, but generally content with just swimming upstream.  Taking up the giant fur seal skin, the villagers formed a circle around it and placed Rene in the middle.  They tossed him up and down, cheering each time he flew higher.  They perceived this was so much fun, other members wanted a turn being tossed in the skin.  This is how the blanket toss began. 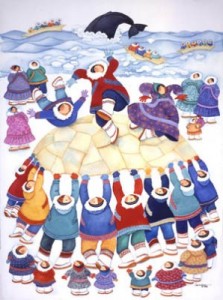 Madama Mama: The rebellion was the work of the great fur-seal pike, an ambitious creature that ate pork and swam in political circles. It would take