Racism is a Verb 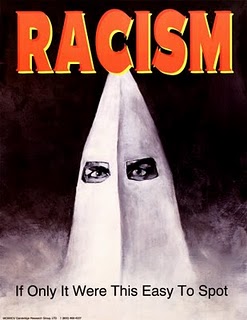 C. Wright Mills spoke of racism as an epistemology of ignorance. Not the ignorance usually thought of as the passive opposite of knowledge, but an ignorance that is resistant and aggressive and not confined to the illiterate and uneducated, but disseminated at the highest levels and presenting itself as knowledge. This is how racism is maintained and cultivated in our society.

A fellow blogger, Rippa, recently wrote about the California Republican official, Marilyn Davenport, who thought circulating an email with a photo attached of president Obama pictured as the offspring of apes as totally appropriate. This is apparently the implicit birther punchline to questions about the president’s authenticity. Of course, most conservatives deny racism, either dismissing this incident as an aberration and not an accurate depiction of US conservatism; or (as in the case of Ms. Davenport), express bewilderment/ shock/ righteous indignation at the outrage to what is (to them) a harmless joke, in the process playing the “PC Police victim” card.

These same hypocrites, however, will understand what you’re about to read as proof that yours truly is a racist. Interesting times, indeed…

Not a day goes by the United States without a racial incident. From the overtly racist savage beatings and murders of people of color, to the more subtle job and housing discrimination, and the countless petty insults that actually mock the “founding principles.” All U.S. citizens are faced with the reality and consequences of racism. With the election of an African American as president, however, cries of a postracial America were heard, not only from the racist conservative side, but also from what is considered the moderate (and in some case, liberal) voices. In reality, what many white people were saying was that Blacks and other people of color couldn’t complain anymore because the election of a black man to the highest office meant that racism was over. In many ways, the election of Obama served to vindicate the conservative voices of race deniers. Or, as I heard a white person state (without irony) immediately after the election, “If I ever hear another black person complain about racism, I’m just going to tell them to shut the fuck up.”

This view, persistently repeated even before Obama was elected obscures the reality that color still matters in a society predicated on an economic system based on human bondage. A system supported by social and theological assumptions that rationalized the treatment of human beings as chattel.

Incidents of blatant racism appear regularly in the United States. Some of the more recent and memorable include the legal system of Louisiana which uncovered the unequal treatment of six teenage African-American boys; the portrayal of the first African-American President of the United States as a bug-eyed Sambo selling waffles and as a primitive medicine man complete with a bone through his nose; the countless public gaffes ranging from the racist macaca remark of former Virginia senator George Allen; to the numerous and astonishing racist pronouncements of Glenn Beck and Rush Limbaugh (take your pick); the banishment of African-American children from a country club pool in Pennsylvania; the ill-tempered “You lie” [boy]! outburst by Congressman Joe Wilson during president Obama’s Congressional health care speech, and the almost nightly depictions of brown-skinned immigrants as vermin — disease carriers infiltrating a vulnerable, pure, lily-white American society in order to leech off of it.

These are but a few of the reminders that race and racism are still deeply woven into the fabric of our society. It is important to learn about racism, to identify and eliminate it. What I mean by racism is the domination, exploitation, degradation, and disparagement of people of color by whites. Obviously, some dark-skinned people express and harbor racist prejudice, but in a society founded on and run of, by, and for white people, in most situations, dark-skinned people lack the political and institutional power to control large numbers of whites. Nor can they establish and enforce policies that promote unequal treatment of whites, or to view them from a social, biological, and historical frame of reference that depicts them as intellectually, morally, and biologically inferior. But such is the way many whites, whether they admit it or not, view dark-skinned people.

As one study noted, “… a new form of prejudice has come to prominence, one that is preoccupied with matters of moral character, informed by the virtues associated with the traditions of individualism. Today, we say, prejudice is expressed by the language of American individualism.” In other words, conservative talking points about individual failure are racially coded expressions of negative stereotypes. A good example of this new and more subtle racism can be found in studies of residential discrimination. The Detroit Area Survey, for example, found that 16 percent of whites said they would feel uncomfortable in a neighborhood where 8 percent of the residents were black, and nearly the same number said they were unwilling to move to such an area. If the black percentage rose to 20 percent, 40 percent of all whites indicated they would not move there, 30 percent said they would be uncomfortable, and 15 percent would try to leave the area. Were a neighborhood be 53 percent black, 71 percent of whites would not wish to move there, 53 percent would try and leave, and 65 percent would be uncomfortable.

Contrary to conservative mainstream claims, one finds very little evidence that many white Americans believe in integrated neighborhoods. Especially if it means a neighborhood with more than a few black families. These racial stereotypes are not restricted solely to residential preference. They continue to be fundamental to (white) American culture. The FBI’s annual report on the incidence of hate crimes in the United States shows that the vast majority (71.5 percent) of hate crimes committed in this country were offenses by whites against blacks, compared to 17.3 percent committed against whites. It is also true that people of color sometimes react violently against whites as a reaction to being discriminated against.

Essentially, racism indicates not only negative prejudicial thoughts about people of color. It is more than an emotional, primitive disgust and loathing of them. It has an action and systemic component attached to it. Racism is a transitive verb that implies the release of these negative beliefs into an institutionally discriminatory behavior to the detriment of its victims. This is not meant as a rant against whites. Indeed, I am more interested in the institutional manifestations of racism, than the dead end of defining and exploring racism from a purely individual perspective. Rather, I am interested in searching for ways to illuminate how systemic practices and inequality destroy our society. Racism in this country would exist even if there weren’t any racists.

At its core, racism is really about the struggle for power and privilege. One way of looking at it is to consider who runs things. Another is to consider the question, “Who can do what to whom and how often?” Ms. Davenport (as with the majority of conservatives) was merely acting out on her “expressed” values as opposed to “values-at-work.” In other words, people will often commit verbally to what they think people want to hear (e.g., the “right” answer: equality, democracy, etc.), as opposed to how they actually make decisions and live their lives. In the vernacular, it would be expressed as “talking the talk” versus “walking the walk.”

Eddie SantoPrieto: C. Wright Mills spoke of racism as an epistemology of ignorance. This is how racism is maintained and cultivated in our society.

Surviving the Chaos – a Guide to Preparation for National Turmoil