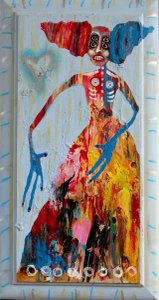 So they’re getting there.

& Helen uses her pinky finger to move the tiny umbrella in her glass so she can drink, & she slurs on about her Junior, who has moved back into her mobile home. AGAIN.

All eyes on Margaret.

There is all-around agreement that this is worse than Helen’s pickle. Agreement that poor Margaret has it bad indeed

There is silence as they think about Margaret & Henry’s predicament.

Finally, my Aunt Maxine clears her throat. Swallows another Nembutal. Picks at a particularly scary mole on her arm.

//He tells me they’ve talked it over & they have decided they’re moving into my uterus, because it’s warm & it’s comfortable in there & from what he remembers, there’s a lot of easy floating around doing nothing all day involved.\\

Everyone by the pool agrees that Maxine’s story just about takes the cake.

//Because after that, I get nervous about my OTHER kids, so I decide to stop the vicious cycle. I swallow my youngest right down. Eat him up. Well, HE takes up residence in my stomach & demands cable TV, complete with premium channels!\\

//Jason & my youngest talk through my meaty walls to each other, & they’re complaining about me, mostly.\\

//That night, I dream of the perfect son, & I dream of what he’d be like. Come next morning, I find that Dream Child still in my head, & he’s taking online classes & demanding piano lessons!\\

& all the ladies just sit there in their house dresses, sipping their drinks, staring @ the sun reflected on the water, while their husbands stay out too late boning overpaid nubile secretaries.

& all the housedress ladies sit there, growing old & dreaming of death.

1 thought on “The Boomerang Kids”