Many of us experience that prickle feeling with the body hair standing on end and the skin looking like “goose bumps” time and again. It is usually associated or identified with chills, shiver and certain emotional states. Less known, however, is that this prickle is informative and effective in the fields of health care and spirituality. This is suggested by both medical studies and the experience of spiritual masters of different cultures.

The spiritual significance of prickling

If the spiritual dimension of the prickle feeling is not immediately evident to us, it may be because our familiar sources of information don’t make ties between the two. According to current physiology, goose bumps are a relic of a distant past: when the hominids of prehistoric times were still covered with dense hair, the rise of the hair protected from the cold and made women and men look bigger and more menacing – which is thought to have helped averting combats in threatening situations. For relatively hairless and clean-shaven modern people, however, the prickle feeling has become useless. The Bible, on the other hand, links the phenomenon to fear and terror: “Fear came upon me, and trembling, which made all my bones to shake. Then a spirit passed before my face; the hair of my flesh stood up“ (Job 4,14-15). 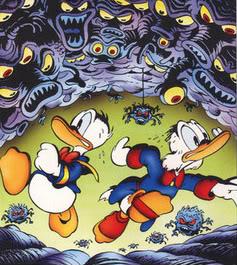 Religious and spiritual traditions of non-Western cultures point to a different aspect: prickle feelings are associated with meditative and ecstatic states, often while experiencing a deep devotional love towards a deity. This is not so difficult for us to comprehend if we remember that we know this feeling from very beautiful moments, be it while listening to harmonious music, looking at touching natural phenomena, or feeling one with a person we love.

Speaking of love and sexuality, the prickle on the skin may be understood as a result of deep and conscious relaxation of body and mind. The Kamasutra, a 4th century Indian textbook of carnal love, teaches a particular type of touch that will cause the prickling (Kamasutra 4. 10). Psychologist J. Panksepp observed neurochemical similarities between the prickle feeling and the sexual orgasm – pointing to the fact that the exhilarating prickle is often felt during intense orgasms involving the whole body (“skin orgasm”, “full body orgasm”). 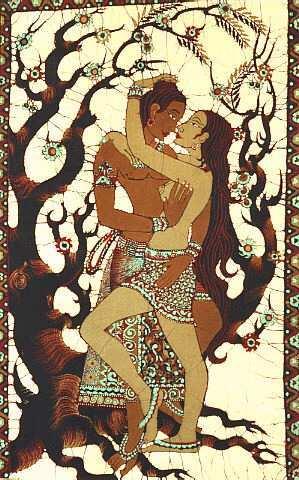 Now we understand the deeper meaning the prickle has for many masters who transformed carnal love into spiritual love: love is not directed to a person, but to God; the sexual orgasm is replaced by the whole body orgasm of an overwhelming and ecstatic prickle. The Indian Yoga textbook Gherandasamhita, for example, classifies the prickle feeling as a phenomenon of bhakti, devotional love (7,14-15). And in the Hindu epics and legends, the hair of the bodies of heroes, yogis and gods raise when they behold divine beings or hear timeless truths – like Arjuna, the hero of the Bhagavad Gita, whose hair stands on end when he recognizes the universal nature of his charioteer, god Krishna (11,14). And the Bhagavata Purana, focused on devotional love for the incarnations of Vishnu, particularly Krishna, clearly states: “How can without bhakti one‘s hair stand on end, without loving service the heart melt, without devotion the tears flow, the bliss be and one‘s consciousness be purified?” (Canto 11,14,23). 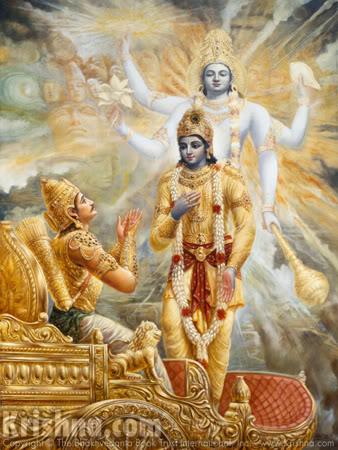 In religious literature, the prickle feeling is also mentioned as an accompanying aspect of deep contemplation and meditation. In the Abhidhamma, the most recent part of the Buddhist Pali canon, the sensation of a prickle indicates a certain level of meditation: after the thoughts have ceased to flow, an overwhelming joy (priti) spreads throughout the whole body which may intensify to total ecstasy. The phenomenon is not unknown to some mystics of the Semitic religions: church father Augustine wrote in the 4th century about a holy shiver that suddenly has come over him and let him recognize the invisible nature of the creation of God. And the 11th century Islamic mystic al-Qusayri connects goose bumps to the state of deep humility (tawadu) and the disclosure of truth. In addition, the prickle feeling is a phenomenon often reported by members of societies that frequently use ritual techniques of ecstasy and trances to achieve altered states of consciousness. We have anthropological data suggesting a close connection between goose bumps and ecstatic states or trance from Bengal, Micronesia and South America, where the tingling is often associated with the presence of super-human powers and certain states of the soul.

Healing through prickling – a holistic and energetic perspective

If the prickle feeling goes together with devotional love, ecstasy and altered states of consciousness in general, we can understand it as a symptom of holistic development and healing. But how does this phenomenon bring about healing?

To answer that question, I suggest to think of the prickling as a sensation that indicates subtle energy which flows out of the psychosomatic body. This view corresponds with the Ayurvedic teaching that understands the prickling as a sign of an increased vata dosha – wind or ethereal – state, and thus as subtle energy. Any prickling with hair standing on end would therefore point to excess energy flowing out of the body on a subtle (vata) level. As energy flows out, it dissolves subtle blockades and slags and brings about cooling – just as sweating, urinating and defecating bring about cleaning and cooling on a more material level (pitta and kapha).

Generally, Western academic medicine does not ascribe cleaning and cooling effects to the prickle phenomenon. Rather, it is known as a symptom of various, often infectious diseases, along with cold, faint, dizziness, numbness and other troubles. There are indications, however, that the prickling is, like fever, a defensive reaction of the body. Fact is that certain medicine can cause prickle feelings in patients. Interpreted from the perspective of energy, the active agent of the medicine causes the patient’s subtle energy to flow out of the psychosomatic body through the prickle feeling and, thus, to clear body and mind from the disease. Furthermore, there are statistical studies suggesting “chills”, usually accompanied by prickling, to have an unexplored health benefit. It was found that fever patients with blood poisoning who have chills show higher survival rates, compared with those patients who do not experience chills. The researchers suspect that, in general, patients with chills are able to respond more effectively to diseases.

If we proceed thinking in line with the energetic-cathartic interpretation, we learn about the cleansing effect of the prickling also on a psychological level. Inner tensions are made conscious and get resolved through the experience of the prickle feeling. In fear situations, for example, it is the energy of fear that we release through our psychosomatic body. With increasing progress, fear symptoms like tremors and heart palpitation will cease to appear. This allows us not only to stay calm and centered in such situations, but we can even learn to enjoy this energy – fear is losing not its energy but its emotional power over us. Also, the prickling in the head, which sometimes is noticeable in states of intense anger, has the effect of a “valve” and allows us to immediately become calm and relaxed. In this way, we have not suppressed the aggression but rather let its energy flow out of our body without being rude or even destructive against ourselves or others – we have overcome the anger. The same happens with strong affection in love or sexuality. A conversation with a sympathetic human being can cause a relaxing prickle feeling – it enables us to enjoy that moment free from possible oppressive constraints and desires. Also, those who try to convert their sexual energy will increasingly experience hair standing on end, indicating the outflow of transformed sexual energy – by way of an ecstatic full body orgasm, which relaxes and strengthens body and mind and lets us experience a beautiful and joyful environment. 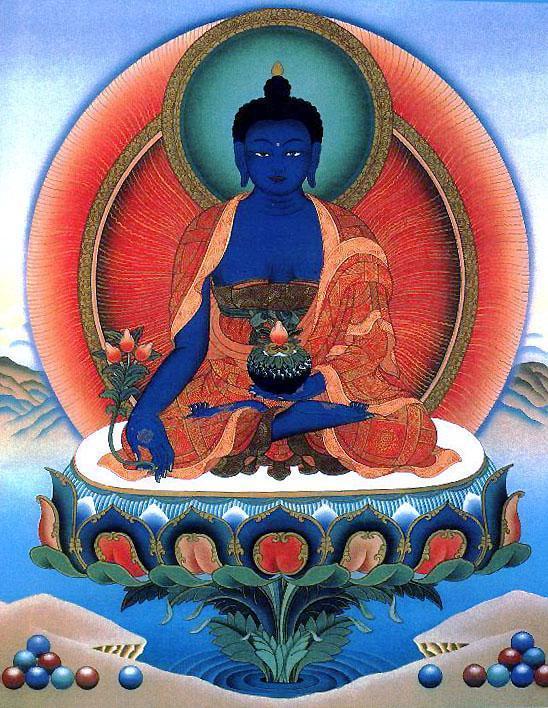 Fig. 4: Tibetan Medicine Buddha: Does he heal through his ecstatic energy radiating from his body? Photobucket (http://media.photobucket.com/image/medicine%20buddha/gwandana/buddha.jpg?o=7 (24.2.11))

In all these cases, the prickle feeling helps us to become aware of emotional tension, to dissolve and release it as pure energy without becoming entrapped in emotional dependencies. Neuropsychological studies indirectly confirmed this when they found that “goose bumps” are associated with increased attention and positive assessments, as well as with reduced anxiety and aversion in the persons examined. Thus, in the sense of a holistic cleansing or development, the prickle feeling has a healing aspect which is inseparable from spirituality. Western medicine and physiology is gradually discovering what was known and exemplified by spiritual masters of different cultures and traditions: the relaxing and energy releasing prickling sensation on the skin, which can be intensified to ecstasy by an appropriate lifestyle, makes us confident and lets us affirm and enjoy our lives.

The pictures are taken from image hosting websites, from scientific publications (online and print) and/or from my own collection (FT). Either they are licensed under a Creative Commons license, or their copyright is expired, or they are used according to the copyright law doctrine of ‘Zitatrecht’, ‘fair dealing’ or ‘fair use’.

Guenther, Herbert V. (1974): Philosophy and Psychology in the Abhidharma. Delhi

McDaniel, June (1989): The Madness of the Saints. Ecstatic Religion in Bengal. Chicago

The name Floco Tausin is a pseudonym. The author is a graduate of the Faculty of the Humanities at the University of Bern, Switzerland. In theory and practice he is engaged in the research of subjective visual phenomena in connection with altered states of consciousness and the development of consciousness. In 2009, he published the mystical story “Mouches Volantes” about the spiritual dimension of eye floaters.

Floco Tausin tells the story about his time of learning with spiritual teacher and seer Nestor, taking place in the hilly region of Emmental, Switzerland. The mystic teachings focus on the widely known but underestimated dots and strands floating in our field of vision, known as eye floaters or mouches volantes. Whereas in ophthalmology, floaters are considered a harmless vitreous opacity, the author gradually learns about them to see and reveals the first emergence of the shining structure formed by our consciousness.

»Mouches Volantes« explores the topic of eye floaters in a much wider sense than the usual medical explanations. It merges scientific research, esoteric philosophy and practical consciousness development, and observes the spiritual meaning and everyday life implications of these dots and strands.

»Mouches Volantes« – a mystical story about the closest thing in the world.

Floco Tausin: Generally, Western academic medicine does not ascribe cleaning and cooling effects to the prickle phenomenon. Rather, it is known

Racism is a Verb