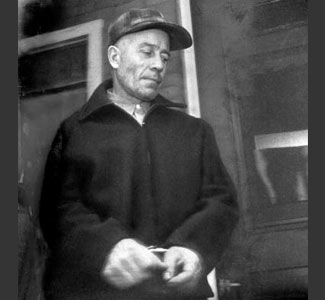 A few days ago, I was taking part in a discussion on serial killers, when the name of Ed Gein came up. For those of you who aren’t familiar with this person, here’s a potted biography:

Ed Gein was an American murderer and – to use the word in the original form – ghoul who was arrested in 1957 for killing at least two women and robbing graves for fresh female corpses, whose skin he was using to try and make himself a woman suit. At his arrest, his house was found to contain numerous female body parts fashioned into, among other things, a lampshade, a belt, bowls and masks.

Now Gein wasn’t actually a serial killer (though he is commonly supposed to be one), since his known victims added up only to two; and the discussion I was engaged in was on serial killers. But one of the other participants said, in paraphrased terms, that she couldn’t see how Gein was any less evil than a serial killer due to the nature of his crimes.

That comment opened up a train of thought, and in this article, I intend to see how far that train takes me.

Let’s start off at the idea of the serial killer, generally considered to be a psychopath or sociopath. Largely due to the influence of Hollywood slasher flicks, these words have pretty much become synonymous with “evil”. But what’s a psycho/sociopath, anyway? Primarily the term denotes people who lack the moral compass that generally keep the rest of us from harming our fellow beings. A psychopath or sociopath is, comparatively speaking, like a person born with a congenitally missing finger; he or she lacks something in her make-up, call it a conscience or empathy or whatever you want. He or she is literally incapable of understanding or caring about the pain and suffering of other people, even when he or she’s the one doing the inflicting of pain and suffering.

Such a person is dangerous, granted – maybe even extremely dangerous. But, realistically, can you call him or her evil? Is a man born congenitally blind evil?

We can compare the psychological status of the psycho/sociopath with a much less rare category of human being: soldiers. As we all know, part of the job of soldiers is to “make the other son of a bitch die for his country.” But, as militaries have long known, it’s actually extremely difficult for a normal human being to consciously, in the absence of the adrenaline rush of self-defence, to kill another human being, especially so if said human being is from the same broad ethnic group as the prospective killer himself.

Militaries and militias around the world solve this problem in one of two ways. If they can, they use children as soldiers, because children (among other things) have far less than fully developed brains and lack a moral sense; they’ll shoot and hack and stab without being able to comprehend the meaning of their actions, just because they are ordered to. Or else, they set out to create psychopaths out of normal people. And, yes, they know how to do it.

And that’s why you have those films of sadistic drill sergeants terrorising new recruits. That’s why a large part of basic training comprises brutalisation and mindless obedience to orders; so that the soldier feels himself part of a machine, and loses the “humanity” that would prevent him from shooting another human he has never seen before and who merely happens to be wearing a different coloured uniform. That’s why soldiers are made to hack and chop at dummies of human beings until they can be trusted to hack and chop at real human beings.

In other words, much of basic training is geared to producing artificial psycho/sociopathic personalities. And is it a surprise that so many of them, in later life, go off the rails? Is it so surprising that so many spree killers, like John Allen Muhammad (the Beltway Sniper) or Charles Whitman, were ex-soldiers? Once you make a psychopath out of a normal person, can you depend on that person ever becoming normal again?

Accordingly, I’ll stick my neck out and say that you can call a serial killer sick, deranged, insane, a danger to the community, or whatever else you want, but you can’t call him evil, unless you pretty much include anything that doesn’t conform to your view of what’s right as “evil.”

And right there’s the big danger. Once you begin classifying things as “evil”, you’re on a slippery slope of Manichean black and white where pretty much everything is black. Remember the Axis of Evil rhetoric? Ultimately, none of those states were particularly evil, any more than any other, and the only one of them to be “de-evilised” seems to have become rather more evil from any objective viewpoint.

And then there’s the other problem with calling things evil. A blanket word of this nature is meant to arouse a visceral reaction. Once you call something evil, you’re automatically saying that the factors that create the said person or situation aren’t open to discussion. Call Hitler evil, for example, and you don’t have to consider the factors that went into creating him, such as historical European anti-Jewish sentiment, the First World War, Versailles, or the cynical war reparations which caused mega-inflation in Germany. Call Hitler evil, and he can be considered to be something like the smallpox virus, to be stamped out and destroyed, and you don’t have to be worried about how your own actions are capable of producing a new Hitler. That’s the power a word like “evil” can have.

Then, of course, evil is all in the perception. If you want to believe in evil, you can find it pretty much in anything. Just like the Loch Ness Monster, where wind on the waves or a rolling log, to the true believer, can be nothing but Nessie coming up for a look, anything, if looked at in the right way, is evil. Just the other day I was discussing the niqab, which is inherently “evil” according to a lot of people. But in the middle of a sandstorm, what would you have a woman wear? A bikini? The Inquisition killed a lot of people for heresy. Just about anything could be called a heresy, if looked at in the right way. Again, the “evil” was just in the eye of the beholder. Like beauty.

Religious evil? I’m not religious, and I have no religious belief. But even the concept of sin has mutated so much over generations and cultures that just about everything you can name is, or was, somewhere, somewhen, “evil.” You can bet on it.

Even the Christian Epitome of Evil, Lucifer, isn’t quite that. Lucifer may be called “evil”, but has his own essential function as ‘God’s’ foil and alter ego. Without Lucifer to punish/lead astray, would there even be any point in the existence of ‘God’? Therefore, since he has his own essential theological part to play, I submit that Lucifer is not evil…

So, yes, I do believe that “evil” in itself is an evil word, if there be such a thing. There is no evil, in practical terms, though there are many bad things. Those bad things are bad in their own ways, and have to be countered according to the circumstances.

To repeat: there is no evil.

For, yes, I am evil. I’m evil on several levels, least of which is my defence of Lucifer above. I look forward to the brickbats in the comment section.

Bill the Butcher- The terms Psycho and Sociopath denotes people who lack the moral compass that generally keep the rest of us from harming our fellow beings.