Nuclear War in the Mideast

It is the spring of the year; a time of rebirth, renewal and regeneration.  It is also a time that painfully signals the advancing epidemic of poor global health.  It marks one year since the Mexico Gulf Coast oil spill; a tragedy that analysts say isn’t really as great as it first appeared.  They point to a few large water fowl that have returned to their nests, some clean public beaches and a return of tourism for generating the economy.  In the meantime, the families of those who died in the oil spill continue to mourn their losses.  In the meantime, thick, black oil continues to ease from the sea.  In the meantime, the fishermen who depend on shrimp and crab harvests, return home empty handed.

This trembling spring, still wounded, marks one month since a devastating earthquake and accompanying tsunami killed Japan and its best hopes of recovery by critically damaging its nuclear reactors and initiating a full break down.  Anxiety arises, not just for the plight of the Japanese people, but also the effects the radioactive cloud will have on the global environment and economics.  Their fears are justified.  Not only was Japan the third largest economy in the world, proving that industry and technology can provide for millions on an island no larger than California, environment and economy are intricately tied.  In the wake of the disaster and the tons of contaminated water emptying into the sea, food companies and their customers nervously debate the safety of eating Northern Pacific fish, even with the assurances that the radioactive dispersing will be too minute to have any effects on a marine life diet. 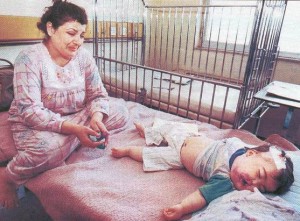 Exposure to the dust from depleted uranium missiles has long been suspected to be the cause of Gulf War Syndrome.  When the United States first began its nuclear weapons program in the 1940’s, it stored the depleted uranium as an unusable waste product.  It was hoped that someday technology would become advanced enough to use the high density nuclear material.  By 1980, it was.  Depleted uranium is a very dense metal; 1.67 times as dense as lead, only slightly less dense than tungsten or gold.  It has been used in tank armor, sandwiched between steel armor plates, in ammunition from a 30 mm caliber armor piercing round to the A-10 Thunderbolt II cannon used by the US Air Force.

Depleted uranium weapons were liberally used during the Persian Gulf War, during the bombings by  NATO and the United Nations over the Serbian Republic of Bosnia in September 1995, against Yugoslavia in spring of 1999; in this century, during the attack on Afghanistan and then further in Iraq in 2003. Their effects have been largely minimized by the deploying governments and the media, but the effects have long-ranging and devastating consequences.

According to the CNN report, “In 1999 doctors from the University of Texas Southwestern Medical Center in Dallas presented the results of brain scans performed on victims of the syndrome showing depleted brain cells in three areas of their brains.

“This year we show that brain cell losses from specific areas of the brain correlate with different symptoms and abnormalities,” lead researcher Robert Haley said in a report released at the annual meeting of the Radiological Society of North America.

The scans performed on 12 veterans with severe cases of the syndrome found brain cell losses of between 10 percent and 25 percent in three regions deep inside the brain — the basal ganglia in each hemisphere and the brain stem. Scans performed on healthy veterans of the 1990-1991 Gulf War were normal.”

Arthur Kerschen, who claims to be a Molecular and Cellular Biologist for a private (unnamed) Biotech Company, is a skeptic.  He felt  the Gulf War Syndrome was a lot of hype and paranoia perpetrated by the American Legion, which urged all Gulf War veterans to sign in with their database.  He stated, “Make no mistake about it, the proponents of Gulf War Syndrome will stop at nothing less than a large monetary settlement with the United States government, at taxpayers expense; and an end to United States efforts to liberate oppressed peoples of the world.” 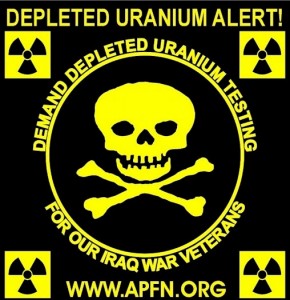 These early accounts did not include the possibility that exposure to depleted uranium could be the culprit.  Kerschen’s statements were based on an observation that those who claimed the symptoms were spread out evenly over the territory of Iraq instead of restricted to a particular platoon or region, thus, in his professional opinion, ruling out the possibility of biological or chemical weapons.  The CNN report concentrated solely on the possibility that known chemicals, apart from the weapons used, were the culprit.

The Hazards of Depleted Uranium Artillery

Depleted uranium artillery projectiles are  favored by the military as they are shelf sharpening, penetrate deeply into their target and are pyrophoric.  When a DU penetrator reaches the interior of an armored vehicle, it catches fire, often igniting ammunition and fuel, killing the crew, and possibly causing the vehicle to explode.  When a DU projectile explodes, it leaves behind a dust that is both toxic and radioactive.  When the powder is ingested, either through drinking, eating or breathing it in, it causes damages to the kidneys, liver, bone marrow and chromosomes.

Although the metal itself is not radioactive, the low level radiation from exploded DU projectiles has a half life of 4.4 billion years.  Because it is a very heavy and dense metal, unexploded shells sink deeply into the ground, eventually leaching radiation into the soil and water.  Effectively, the radiation does not dissipate over time, but instead accumulates with additional detonation. 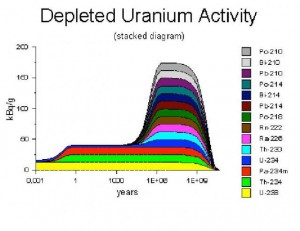 At least 350 sites in Iraq were contaminated during DU weapons bombing.  The Nation now reports 140,000 cases of cancer with six to seven thousand new ones reported each year.  The bombing not only increased birth defects and severe deformities within civilian exposure, but sixty-seven percent of those enlisted into active military service who parented children after their return home, had babies with birth defects and/or  cancers.

Depleted uranium has been proven to cause serious damage to troops, civilians and the environment, but the US, France and Britain have blocked a UN ban proposal. The US Government categorically denies the dangers of depleted uranium, despite evidence that 90,000 of registered claims of Gulf War Syndrome have deteriorated into cancers and debilitating diseases.  The problem, as explained by medical specialists, is once the dust settles into the lungs, it will not come out.  The depleted uranium, with its four billion year half life, is there to stay. 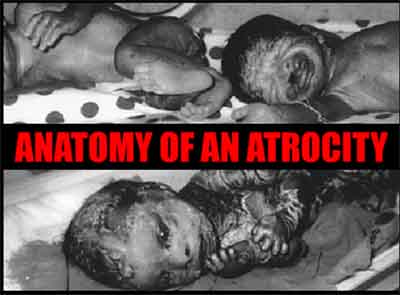 According to Phyllis Bennis, from the Institute of Policy Studies, “The U.S. and its allies appear to be using depleted uranium bombs in Libya, which is going to have enormous consequences for the future of Libya. We see political consequences in terms of the U.S. and its allies ending up, as they have in places like Iraq and Afghanistan, in control of the post-intervention government that gets created.”

Bennis sees the US led NATO forces into Lybia as a stepping up of war efforts similar to the actions of deployment in Afghanistan.  “What we’re seeing is a clear commitment on the part of NATO and the U.S. for regime change—exactly what the U.N. resolution was not designed to do,” she states.  “ And what we’re hearing now is a sort of playing with words among NATO countries—the U.K. and France, in particular, that had been the most aggressive in wanting to escalate and take an official position in support of regime change in Libya.”

Oddly, for a country so anxious for change, a study of its political climate doesn’t reveal the marked determination of peaceful revolution by a unified citizenry as was evidenced in Egypt.  Gaddafi seems to have a lot of supporters.  Though a strong case of human rights violations could be filed against him, an even stronger case could be brought out against the NATO forces supposedly assisting the rebels, and in fact, jeopardizing the lives of countless citizens.  The bombings consistently occur in areas occupied not only by Gaddafi’s armies, but among rebel strongholds and in densely populated areas.  The Tehran Times reported that cruise missiles had been used since the earliest days of the conflict, missiles well known to contain  Depleted Uranium either as flight stabilizers in the wings, or as weight kinetic energy enhancer. In the last week of the conflict, A-10 airplanes were deployed, and those too are well known for using DU bullets.

The arid climate of Libya; like Iran, Iraq and Afghanistan; favor the dispersion  in the air of particles of depleted uranium, which can be inhaled by civilians for years after the explosion. These particles can also be picked up by trade winds that disperse them across countries and continents.  The inevitable outcome of this contamination is an increase in cancer, respiratory illnesses and deformed babies around the world.

The motivating factor for the escalating war in Libya is not concern for the well being of the citizens.  It is the concentration of Western influences for the continuing a monopoly over Mideast oil, and an ambition to control the changing politics of the Mid Eastern countries.  This lack of true humanitarian impulse will blacken the eye of organized trade for decades to come.

It is the spring of the year, and the warning bells have struck twice with vivid images for the world to see.  It has struck a third time, invisibly, in a massive effort to cover up the long term effects of depleted uranium warfare.  It has been wrapped in the secrecy of governments and military officials.  It has been categorically denied with categorical evidence in the victims of DU particle inhalation, in the malformation of small children, for a war that can not be won.  It is the most unclean and hideous of wars; a war that concentrates solely on profits for an industry that chooses wealth now, and a dead Earth later.  The Depleted Uranium already in the air is with us to stay.  It will compromise the natural health and chromosome structure of all living creatures for generations to come.  The question for the weary world, shouldering the consequences of unethical decision making, should we continue to allow the bombing of Mid Eastern countries with weapons of mass destruction, or will the bells toll on until they are forever silent?

As stated by Ramsey Clark in An International Appeal to Ban the Use of Depleted Uranium Weapons,
“Depleted-uranium weapons are an unacceptable threat to life, a violation of international law and an assault on human dignity. To safeguard the future of humanity, we call for an unconditional international ban forbidding research, manufacture, testing, transportation, possession and use of DU for military purposes. In addition, we call for the immediate isolation and containment of all DU weapons and waste, the reclassification of DU as a radioactive and hazardous substance, the cleanup of existing DU-contaminated areas, comprehensive efforts to prevent human exposure and medical care for those who have been exposed.”  The time for denial is over.

Karla Fetrow: A war fought with depleted uranium weapons is a nuclear war. It is a war against the human race, the earth itself, the water and the animals on the planet.

The Niqab ban: A Study in Stupidity