Nomads From The Land of Fire 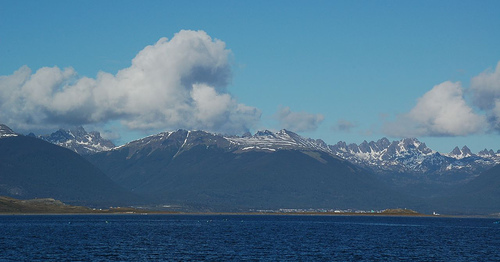 Subversify welcomes Alexandra Pratt, an experienced non-fiction author and freelance journalist. Alexandra has written for a variety of magazines in the UK and North America, specialising in travel/adventure, property and heritage issues. Her published books include Lost Lands Forgotten Stories – A Woman’s Journey To The Heart Of Labrador (HarperCollins 2002 & Eye Books UK 2005), based on her award-winning canoe expedition in eastern Canada and, most recently, The Day The Island Exploded, the true story of a dramatic escape from a volcanic island in Antarctica  (for younger readers, 2009, Barrington Stoke).  She also has a new radio travel show called Off The Beaten Track. Episodes can be heard on her website www.alexandra-pratt.com

“Crossing the Channel from Argentina to Chile can be difficult,” the guy in the Ushuaia tourist office admitted, showing a rather charming skill for understatement. “But you could try these people – they’re new.” And so I found myself in a small zodiac inflatable boat, zipping between opposing gunboats on the Beagle Channel, one of the most heavily militarized waterways in the world.  This was the final, bone-crunching, leg of a long journey to Patagonia and the world’s southernmost permanently inhabited island, where the last survivors of an ancient race reside.

Isla Navarino sits between Cape Horn to the south and Tierra del Fuego across the narrow Beagle Channel to the north. Here, the peaks in the Andes chain rear up to 2000 meters before crashing into the cold southern seas. Sub-Antarctic forest covers the lower slopes, where guanaco roam and condors soar. The island itself is largely unspoilt, thanks to its remote location and tiny population, most of whom are Chilean naval personnel, a result of past border disputes and poor relations with their Argentine neighbours.

The original inhabitants however, were the canoe nomads known as the Yaghan. When Ferdinand Magellan explored these waters in 1520, he named it the ‘land of fire’ because of the Yaghan’s numerous campfires along the shores. Yet for centuries,  staggeringly high rainfall and unpredictable weather meant that this southern tip of the Americas was largely ignored by European settlers, serving only as an occasional pirate hide-out or test of endurance for ships ’rounding the Horn’. By the 19th century, the riches of sheep farming and gold mining changed all that – and the way of life of the indigenous inhabitants, for ever.

In the 1830’s Darwin’s work exploring and mapping the region with Captain Fitzroy on the Beagle was instrumental to that process of settlement and colonization. During their voyage, they dropped anchor at Navarino and I passed the rough track down to their landing place as we made the 90 min drive from the jetty to the main settlement of Puerto Williams. It quickly became obvious that this was a very different place to brash young Ushuaia. The van, (which had delayed us for 2 hours by refusing to start) rattled alarmingly on the hilly, dirt track, threatening to disintegrate each time our driver braked to avoid the semi-domestic long-horned cattle that stood in the centre of the track, staring curiously as we edged by. 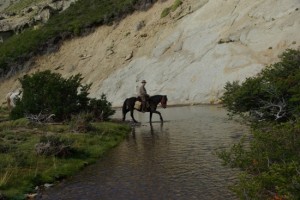 In one particularly beautiful cove with magnificent views across to the Argentine peaks newly-carved (in geological terms) by glaciers, was a small cemetery. Marked off by picket fencing and full of long-stalked wildflowers, this Yaghan graveyard and the bay, called Mejillones (‘Bay of Mussels’) has played a central role in the history of the Yaghan people.
“We lived there before we came to Villa Ukika,” explained Cristina Calderon when I met her the next day. Cristina, who is the last surviving Yaghan, now lives in a small government settlement on the island, with her family and other, mixed-race descendants of these once nomadic canoe people. “We had no light, water or amenities, but much of the traditional skills had already been lost.”

Those traditional skills had allowed thousands of Yaghan and, in the archipelagos further west and north, other nomadic canoe peoples including the Alakalufe, to survive in unbelievably harsh conditions. Most of the food came from the ocean, so the people spent most of their lives in bark canoes, which could take up to ten people. The canoes needed to be bailed continuously, which was usually a job for the children, as was keeping the fire burning in the centre of the craft on a bed of sand.

Surprisingly, only the women could swim and would dive into the icy waters with no protection other than seal grease to collect shellfish. The men of the group stayed in the canoes, hunting whales, seals and other larger prey with harpoons made from animal bones. Sea birds also featured in the Yaghan diet and on stormy nights, the men would climb down the cliffs and catch cormorants in their bare hands, killing them with a single bite through the neck.

Like many indigenous societies, the Yaghan enjoyed equality between groups and the sexes. Food was divided equally and even the family dogs contributed towards group survival through hunting. It was a successful way of life, but one which would not survive the arrival of European settlers, who brought disease, religion and the concept of private property, a principle that was reinforced with firearms. On the sheep-ranching mainland, rewards were given for every Indian (in this case Selk’nam) killed.

By the 1950’s, the Chilean government built a new village for the few remaining Yaghan people near to Puerto Williams in an effort to raise living standards. Cristina welcomed the improvement, but like many, was pleased when an effort to reclaim Mussel Bay was won.

“That victory was important as it is where our cemetery is and where our ancestors are buried.” She explained.

That victory came with the help of CONADI, the umbrella organisation for all indigenous groups in Chile.

“Integration meant loosing traditions and the link to their nomadic past” explains Paoula Grendi, director of the local museum, “but the Yaghan became articulate with the creation of CONADI” With that focus, the Yaghan people now hope to recover some of their lost culture, especially their language, of which Cristina is the only fluent speaker

“This is very important, ” she told me as we sat her brightly painted wood and tin house, a stifling heat produced by a wood-burning stove. “I work with my granddaughter to teach younger children the language, we are writing a book.”

Darwin described the language of the Yaghan as one which

“Barely deserves to be called articulate”, yet when Thomas Bridges established a mission for the Yaghan at the Harberton Estancia in 1884, he complied a dictionary of over 32,000 words. The estancia remains a working farm, open to visitors who often arrive by water at this famous Scottish highland look-alike, which bears the name of a Devonshire village. Situated on the Argentine side of the Channel, the estancia looks back across at Isla Navarino and its circle of peaks popular with serious hikers, known as ‘los Dientes de Navarino’.

The closest of those peaks to Puerto Williams makes an ideal half-day climb. As I stood on the summit, with views across the Channel to the razor-sharp range of the snowy Darwin Massif and even Ushuaia, a distant shimmer amidst the blues of sea and sky, I thought how this land has been subject to the ebb and flow of human history. Just as the indigenous groups were the original explorers, so they in turn became the ‘discovered’ when Europeans arrived thousands of year later, shaping this land, as it once shaped men into hunters of guanaco or nomadic fishermen.

Yet the power of  the place remains untouched and made itself felt the day I was due to leave; high winds roaring like jet engines off the glaciers whipped up the channel waters, scattering the seabirds and driving the sea lions off their rocky sunbeds. Despite being the middle of the Patagonian summer, there was no possibility of a crossing for inflatable boats that day. So how, I wondered, did the Yaghan survive in their open canoes? As the world turns and indigenous peoples like the Yaghan disappear, it is one of the many questions we will never fully understand.

Alexandra Pratt- Reflections from a land that has been subject to the ebb and flow of human history, and yet remains somehow untouched and challenges the soul.

One River, Two Women and a Hundred Years