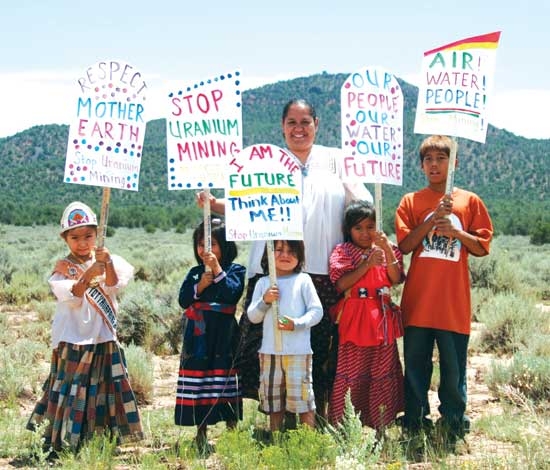 WASHINGTON, D.C. — As Japan struggles to contain radioactive contamination, Groundswell is reminding Americans that over a thousand abandoned Cold War-era uranium mines still contaminate the American Southwest. The US Department of Energy will feature The Return of Navajo Boy project as a case study in film, media, public engagement and measurable impacts at its State of Environmental Justice Conference on April 28th and 29th in Washington, DC. This month, the US Environmental Protection Agency began clean up at Skyline Mine, the site featured in the documentary.

Since 2000, when the film’s cautionary tale stunned Sundance Film Festival audiences, Groundswell Educational Films has brought it and Navajo activists across the country to advocate for a clean up of radioactive waste in the Navajo Nation. The filmmaker, Jeff Spitz, and Navajo participants triggered a federal investigation into uranium houses. Many Navajos, including the grandmother in the film, Elsie Mae Begay, built their homes with uranium rocks from the abandoned mines. The US government failed to warn Navajos about the dangers of radioactive waste.

Decades after ceasing operations, the radiation from more than 1,000 abandoned uranium mines continues to impact homes, livestock, land, and water across the 27,000 square mile reservation. The Navajo Nation is home to approximately 200,000 people. It holds the largest uranium deposits in the United States and suffers from the highest cancer rates in the Southwest region.

Partially as a response to the Groundswell advocacy campaign, the US Environmental Protection Agency has now begun to clean up the area around the abandoned Skyline Mine, including Elsie Mae Begay’s yard spotlighted in the documentary. This month tractors and heavy equipment rolled into Elsie’s yard eleven years after the film’s debut.

“Americans have been rightfully horrified by the unfolding nuclear disaster in Japan. But we forget that there is highly dangerous radioactive waste poisoning communities right here in America,” said Groundswell co-founder Jeff Spitz, who directed the film. “This clean up of the Skyline Mine and Elsie Begay’s yard offers a ray of hope to other families living in remote areas hoping for the same attention. We show how to get it.”

Groundswell’s unique model of film and public awareness campaign empowers Navajos to get attention by equipping them with Flip video cameras, multi-media tools, and opportunities to speak at film events, conferences, on campuses, and in the media nationwide. Navajos upload footage and Groundswell edits short videos that allow thousands of followers to stay engaged in the story unfolding online at navajoboy.com/webisodes.

“Using our own video cameras to document what we are struggling with every day gives us hope that the world has not forgotten about us. It gives us a voice,” said Mary Helen Begay, Elsie’s daughter in law and creator of two recent webisodes. “Our hearts go out to the people of Japan. We hope that they won’t have to live with radioactive waste as we have for more than 50 years now.”

About Groundswell: Groundswell Educational Films is a nonprofit organization with a mission to collaborate cross-culturally in all facets of documentary filmmaking, transfer media skills into disadvantaged communities, and partner with stakeholders to leverage changes that address the social justice issues raised in our films.

Groundswell-The Navajo Nation is home to approximately 200,000 people. It holds the largest uranium deposits in the United States and suffers from the highest cancer rates