How to be a Successful Serial Killer

…AND GET AWAY WITH IT

An Online Tutorial From the Butcher.

So you’ve decided on a career as a serial killer? Congratulations, and all that kind of thing. The world needs more people like you.

Now, before you embark on your new career, there are some things you probably ought to consider. After all, to be successful in any career, one needs a good solid preparation, doesn’t one?

So, here, brought to you by the most successful serial killer of them all, is a free tutorial on how to strike, and survive to strike again.

The first thing, my dear neophyte killer, is to decide precisely what your long term goals are. Do you want success? Notoriety? The two are usually not the same.

You could, for instance, achieve fame in the media, and mention in the annals of serial killers for decades to come. You might have frenzied proposals of marriage from disturbed women, and your face on the cover of Time magazine. Hollywood might even make a movie on you, directed by, oh, Quentin Tarantino or someone. But from the inside of a padded cell as a best case scenario, and from a cell on Death Row as the worst, that fame might not seem to be worth it a few years down the line.

Alternatively, you could opt for obscurity, and work in the shadows for years to decades, and achieve a good high body count, without them laying a finger on you. You could leave a mystery for posterity to clear up…but it would be without any personal fame and recognition.

Now, if you opt for the first course, this tutorial is frankly not for you. A serial killer who’s truly dedicated to his craft will eschew the showmanship that goes into getting notorious, and which will inevitably, sooner rather than later, lead to an arrest. A truly dedicated serial killer will try to achieve maximum returns for the effort, and will have the aesthetic sensibility to leave behind an abiding mystery.

If you would like to be that kind of serial killer, welcome aboard!

First, you will need to understand that you need to throw out all notions of a modus operandi. It’s all very cute of serial killers in the movies and books to exterminate their victims in stereotyped and predictable ways. It makes for great drama when Leatherface fires up his chainsaw and comes for you. But that’s all it is…great drama. (Talking about that chainsaw, more on it in a moment.)

If you want to be a successful serial killer, my friend, take it from me, you must eschew drama, completely. That means, among other things, to be sure to leave no pattern. Even the dumbest police force will begin to suspect there’s a serial killer on the loose after your tenth victim turns up strangled by her own bra, and for starters will warn women to stop wearing bras. This may make some people very happy, but it is going to cramp your style. Remember that.

Lesson Number One: Make every attempt to avoid a pattern. You may want to kill naked young women in the shower. I understand completely. But if you kill only naked young women in the shower, pretty soon every woman who actually braves a shower will have armed policemen waiting for you behind the bathroom door. Putting all your eggs in one basket was never a good idea.

Therefore, as in a stock portfolio, you need to diversify. Kill the young naked women in the shower, sure; but kill old dressed women in the park as well. Kill the yuppie man in the new Mercedes if you think you can get away with it. Mix it up with strangling an occasional spoiled little brat. Variety is the spice of life.

And this also applies to every other part of the killing. Do not, whatever you do, kill at regular intervals. You may have the urge every full moon, but for heaven’s sake, suppress that urge. Get a rubber blow-up doll and slash it to ribbons in the bathroom instead, if you have to. But make sure your killings don’t follow a time pattern, unless you want to be known as the Lunatic Killer or something of the sort.

Or a place pattern, while we are on the topic. If you ever read The Silence Of The Lambs, you might recall a rather interesting observation by Dr Hannibal (“The Cannibal”) Lecter. Lecter told Clarice Starling that we covet what we see every day, and that the killer begins by coveting. He meant that Starling should look for the killer around the first known victim. Therefore, begin killing as far from home as possible, and sprinkle your killings around the countryside. On no account avoid killing in your own locality, though; even a dolt of a cop can stick pins in a map and realise that there’s a mysterious zone of immunity in the centre of a circle of mayhem.

Lesson Number Two: spread them around.

Now, you need to kill ‘em in different ways, as I said. But make sure your weapons are functional. Yes, that chainsaw we mentioned is ultra-cool. I acknowledge that it would probably scare the hell out of anyone if you came stalking them with one buzzing furiously. But it’s probably the most impractical weapon in history, if you think of it…unless, of course, your victim is tied up and unable to get away, and you’re in a nice, soundproofed environment, far enough from any listening ears, and with ample time to wash off all the spraying blood until not a trace remains. And don’t forget you need to keep the batteries charged. Nothing so embarrassing as having your chainsaw die on you just as you’re about to make the first cut, is there?

I think it would probably be better to avoid chainsaws altogether. Or nunchakus. Or katanas.

Another thing while I’m on the subject: don’t try copycat murders, hoping that the blame will go to the original killers. That’s fine in theory, but there are always things you don’t know, which will end up screwing things up. Ignore other happy hackers and do your own hackin’, your own way.

OK, so we’ve done with the killing. So you’ve got a nice warm corpse on your hands. You have to dispose of it. A pain, we agree, but every profession has its drawbacks. So what can you do? Dump it in the sewer? The municipal garbage dump? Weigh it down and drop it off the bridge into the river? What?

You with me so far?

Now I can’t emphasise this enough: keep a low profile. Don’t ever, whatever you do, give in to the temptation to boast, or even to hint. Don’t do it! You never hear me boast of the mound of skulls in my closet, do you? Huh?

Your legacy, as a successful serial killer, can take two forms. You can leave a full confession, to be opened only after your death. The problem with this kind of thing is that some bastard or other might open it early, either out of simple curiosity or because you’re in some kind of trouble and the law wants your papers, or whatever. In either case your goose is cooked.

Plus, revealing to the world just who you were, even after you’ve left it, is so damned unaesthetic, isn’t it?

No, by the gods of murder and mayhem, far better that you die taking your secret to the grave with you. Let them debate you a century in the future, like Jack the Ripper. Let them write books speculating, and shiver in the thought that you might be somewhere out there.

Now that’s a legacy, my friends, a legacy worth the leaving!

I think I saw a naked young woman step into the shower. Did you?

On with the hunt. 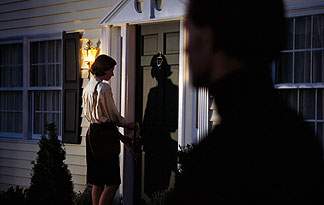 Bill The Butcher- So you’ve decided on a career as a serial killer? Congratulations, and all that kind of thing. The world needs more people like you.