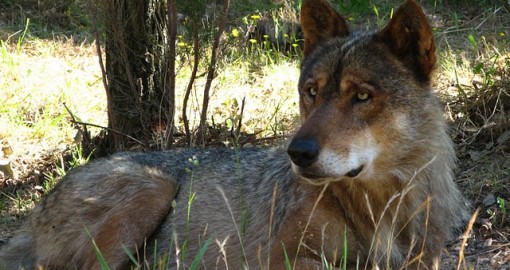 ‘Dawn’ has never been my favourite time of day. And yet here I am, stumbling bleary-eyed down a stony track in the half light, trying – and failing – to move quietly despite assorted binoculars, cameras, tripod and camping stool. A kilometre and a half later, we find three other early risers already settled on the edge of the track, scanning the open steppe below for moving shadows as the sun strengthens and a distant line of hills sharpen against the sky. Then, the excited whisper passes around our little group

I swing my binoculars wildly around an open grassy area,but the last wisps of ground mist drift through the trees, making it difficult to make out anything grey or black. Then, I catch a movement, unpredictable and jerky, like a puppy playing. And that is what it is, sort of; a group of three young wolves, probably last year’s cubs, playing together in the stillness of dawn and suddenly the effort of getting there from England, of getting up in time to see them, is all worth it.

We watch the young wolves at play for perhaps twenty minutes that morning, but we aren’t in a famous North American national park, or remote corner of Canada, we are in north west Spain, just a hour’s drive from a duel carriageway and a line of electricity pylons marking out the unromantic boundaries of the Sierra de la Culebra reservefrom the 21st century. Designated a ‘hunting reserve’, wolveshere, as in most of Europe, don’t enjoy full protection and around three are killed by trophy hunters under license every year. Yet few local people, it seems, regard man’s ancient enemy with anything but pride, encouraged perhaps by the growing number of wolf watchers who hunt with cameras and not guns.

This is because the Sierra de la Culebra is one of the best places in Europe, if not the world, to see wolves in the wild. As more and more people leave a poor living on the remote corners of rural Spain for city life, up to 2,000 Iberian wolves have taken advantage of the depopulation and started to breed on their old territories. It’s a form of re-wilding that is happening unplanned right across Europe and across many parts of recession hit America.

While this remote part of North West Spain may be good for wolves, that does not mean an abundance of facilities, trails, guidance or assistance for watchers, but perhaps that is part of the Sierra’s allure. Travelling south from Santander, we crossed the Picos de Europa, and then the hot yellow plain below gradually rose, as we drove west, into rocky outcrops and unpredictable hills covered in oak and coniferous woodland. In spring, the hills of the Sierra are covered in a mix of purple heathers and yellow broom, with lavender dotted along the road verges and the startled flight of wildlife around every corner.

There are few tourists and even less information in the half-abandoned villages of medieval houses inside the reserve, where rusting playgrounds tell the tale of rural depopulation only too poignantly. We’re staying at possibly the best place for wolf watchers, both for location and for information; CTR Veniata in the tiny village of San Pedro delas Herrerias. The charming and helpful proprietor, Antonio, is ready with small maps of the best viewing places (although you’ll need to speak some Spanish) and a notice board in the reception is kept updated with daily sightings of wolves inside the reserve.

Dusk is also a good time for wildlife watching and as each afternoon ,heavy with heat ,cools into evening, we drive down long, empty roads that turn into tracks, unmarked and untravelled except by the wolves themselves. Outside the village of Ferreras de Arriba, we wait for an hour, sitting on the edge of a forest popular with local mushroom pickers. The scents of pine and lavender are in the air and a million insects drone under the clear tapping of a woodpecker as we scan the scrub and a grassy field below our small vantage point. Once again, beginner’s luck strikes and I catch a movement that wasn’t there a moment before; another wolf.

This time, he is alone, meandering around the field in the soft light of evening. Pale brown and grey in colour, every so often he disappears and I realise that he is lying down. Although large animals, wolves can be invisible in this landscape of bush scrub and low heather. This wolf isn’t resting, though, he is hunting.  A minute or two of utter stillness is broken by a vertical leap as he lands with muzzleand front paws on a single spot; probably some small furry creature scurrying through the grass. We watch this for perhaps ten minutes, before our lone wolf trots into a stand of trees and disappears again, but what a treat!

We were tipped off about this viewing place by another English couple, from Northumberland. Veteran wildlife watchers, they have seen everything from grown bears in Romania to lynx in Andalucía. They are a mine of useful information in a place where there is little guidance for the novice, such as finding the areas where rangers leave slaughtered donkeys for the wolves. A word of caution, however; the ‘rules’ for visitors to the reserve can seemingly change, as we discover when two rangers order us away from a feeding station with threats of ‘reporting’ us, despite there being no signs or any kind of indication this particular placeis not as open as the rest of the reserve. It is very likely thisis a place kept for trophy hunting – not a good mix witheco-tourists and cameras!

Although the hunting brings in little money compared to the growing (and potential) benefits of eco tourism, the presence of the rangers does mean that illegal poaching is kept to a minimum. The rights and wrongs of the situation can fade away though, in a long evening of wolf watching. For those who have not tried it, it may sound boring. It isn’t. Once tuned in to the call of a cuckoo, the surprised sprint of alizard or the wandering of a wild boar sow and her adorable stripy brood, time speeds up rather than slows down and two or three hours pass as easily as the clouds across the evening sky.

There is always something to watch, even if the creature you’re waiting for never turns up! And the Sierra del Culebra isn’t just famous for wolves. It is sanctuary to a wide number of birds, some, such as the Great Bustard, are rare and attracttwitchers. We see cranes, vultures, snakes (‘culebra’ means ‘snake’) and a huge number of hawks I’m not qualified to name, but they’re no less beautiful for that. Deer, wild boar and other game are as abundant as the wildflowers and the lack of other visitors makes it all so easy to explore.

That, of course, may change thanks to articles such as this, but I think the Sierra del Culebra has room for a few more watchers yet, and if it helps spread the word what a beautiful, noble, and above all, shy creature the wolf is, perhaps it won’t be long before those rangers won’t be needed at all.

Alexandra Pratt is a British journalist and author.  You can read more of her writing and contact her at her website : www.alexandra-pratt.com