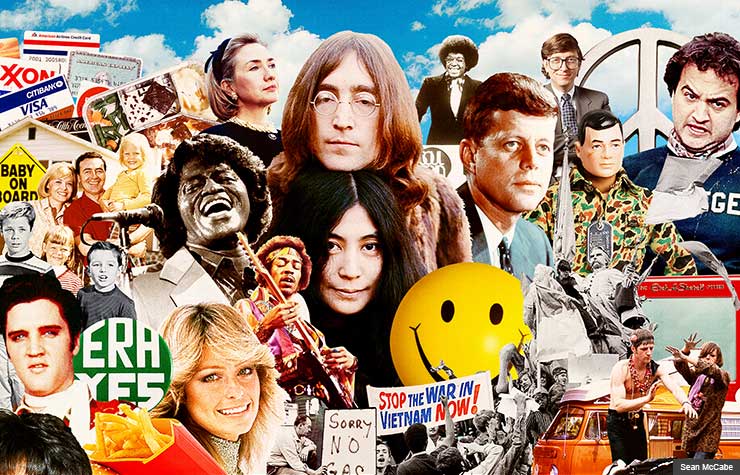 The Baby Boomers Who Destroyed the World

Learning to Rock and Roll

The first baby boomers turn sixty-five this year. They are the first of seventy-five million people in the United States who will be preparing themselves for retirement. In Canada, six million of the post-World War II baby explosion are nudging into their elderly years. In Western Europe, the population did not really begin to burst until 1955, but the effects still resonate. An estimated twenty-nine percent of the population is approaching retirement status; nearly half the population will be too old to work by the year 2050. The baby boomers did not boom out with the exponential growth enthusiastically drawn on the charts for real estate agents and stockholders who envisioned their upward swing in demand as increasing indefinitely. The last big surge was in 1960, with each new generation progressively smaller. The products have over-taken the demand. The results of this optimistic forecast, based entirely on past records, are with us today. While much can be blamed on short-sighted analysts who failed to take in the equation that mothers were having fewer babies contributing to the economy, it’s a singular view. One needs also to look at the baby boomers.

The era of the baby boomers is marked by a rapid change in social thinking. With a recovering economy, the early nineteen sixties were characterized by cheerful, upbeat music, an explosion of colorful clothing, love-ins, smoke-ins and flamboyant comedy. Higher education was on the rise. With the death of President John F. Kennedy and the Vietnam War, a darker mood set in. Sex, drugs and rock and roll, became intermingled with civil rights protests, anti-war demonstrations and a mass movement of young people crossing International borders, adapting to a gypsy like way of life. By nineteen seventy, most of the top twenty percent of the promising youth of tomorrow had dropped out of society. A staggering forty percent of teenagers had tried or were using drugs. The leaders of tomorrow were burdened with unemployment, addiction and an increase in social services.

Birth of the Selfish Society

Some of these changes were far more subtle. Much of the thriftiness of early baby boomers to recycle, reuse and scale down their consumption of goods was prompted by a book called “Future Shock”, which foretold the rise of the throw-away society. A wave of alternative lifestyle magazines hit the shelves, such as Mother Earth, which gave instructions on everything from how to squeeze the last free drops from a gas pump to growing your own garden, Rolling Stone, covering the nature of politics behind reviews of top music stars, and High Times, blatantly cheering the cultivation of marijuana. Other literature infiltrated the mainstream press; an interest in Eastern philosophy, with a be here now perspective, self help books that asserted I’m Okay, You’re Okay, and it’s Alright to Say No.

Somehow, it’s alright to say no, slowly began translating into it’s alright to be rude. The formerly polite society that invited Avon and Watson to step inside their doors, now squabbled about privacy invasion. It was okay to brush aside the help of customer service employees, to openly criticize waitresses and to cut short a sales spiel. It was okay to become loud and belligerent because after all, you were only speaking your mind.

Before World War II, divorce was seldom considered an option. Divorce laws were stringent. Those who wished to end their marriages had to prove adultery or cruelty. In 1950, the divorce rate for men was 84 per 100,000 and 114 per 100,000 for women. In the nineteen seventies, no-fault divorce became available. Uncontested divorces were expedient. One only had to claim to claim that the marriage had broken down or that the differences were irreconcilable. By 1980, divorce rates for men had grown to 4,539 per 100,000 for males and 6,577 per 100,000 for females.

With the break-down of traditional marriage, came the exploration into new forms of relationships. There were group marriages, unrecognized by law but practiced through voluntary association, open marriages; a concept that both husband and wife were free to take on other sexual partners with the idea that they would be open about it; common law partnerships and swingers, married couples gone wild for the weekend. Swingers clubs and singles clubs flourished under the new footloose society.

The nineteen seventies became a time like no other. The taste of freedom in the air was exhilarating; filled with endless possibilities. The arts were flourishing, the economy was good, it was easy to survive on cheap rent, food stamps and a bit of labor. Insurance wasn’t mandatory, gasoline prices were low and medical aid easy to get. The first of the baby boomers, however, were now having babies.

Some decided it was time to settle down. They rejoined the workforce. They bought houses and built up a retirement fund. There were those who decided not to alter their chosen lifestyles. They carried their children with them as they drifted from town to town, following drugs, following the big bands, following the premise that anything goes. Some children were born into communes, set up in the wake of the no-waste, environmental movement.

In the beginning, perhaps the communes were the purest thing to come out of the baby boomers restless youthfulness. Most of them abided by rules of respect for each other and mutual cooperation. Planting, harvesting, cultivating and water carrying were shared tasks. Possessions were modest. Children born into the communes were loved and cared for by all the members.

A curious thing about the communes; one was never wholly like another. Some were set up by religious organizations and involved an indoctrination process which kept new members occupied with chores, seminars, pep talks and closely supervised activities. Some concentrated on co-operative business, turning their farming operations into stable income. Others were set up loosely, the occupants moving into abandoned homes in small rural towns or building their own on unoccupied land from wood scraps found at the local dump. They lived by one rule; mind your own business.

Ultimately, most of these communes failed. The drug culture that had once been content with marijuana and acid trips had shifted to more addictive drugs; amphetamines, cocaine and heroin. As access to these hard drugs increased, so did burglary, theft, violent crime, and the birth of drug addicted babies. Harassed by police, plagued with drugs, unable to retain a stable income in housing and on land that wasn’t legally theirs, the back to earthers began abandoning their communes.

Said one ex-commune resident, “it was the government’s fault. Every time there is a successful movement, the government sends in the addicts and their drugs of choice to ruin everything.” Conspiracy theories were as favored as Cheerios for breakfast. The youth movement rumbled with the Watergate scandal. It churned with the persecution of its life style and spit back demonstrations against nuclear power and US involvement in foreign wars. When the Shah sought sanctuary in the United States, he also opened up a trade in Persian Opium, a form of heroin you could smoke instead of cook. It was extremely addicting, causing a wave of strung out users whose only definition of goals was acquiring their next high. The government probably did not send drugs into the communes to disrupt them, but it was certainly; if inadvertently; responsible for one of the most addicting illegal drugs to hit the market.

There were two baby boomer bursts; one that began tapering by 1955, and another that energized between 1956 and 1960 before dwindling. The second burst had far different characteristics than the first. The 1960’s baby felt no impact from the assassination of John F. Kennedy. The Vietnam War was a childhood memory, Watergate held no real significance. The back to earth movement had fallen on hard times and poverty. The nineteen sixties baby boomer was motivated to earn money and engage in politics. They adapted much of the thriftiness and natural health consciousness of the first baby boomers, but with an eye for profit. Their politics revealed a preference for resource development, structured education and privatized health care. While the second burst struggled its way into affluence, the free wheeling hippie fell by the wayside.

The first wave of baby boomers are hitting retirement age at a time when social security is shaking at its roots, when retirement funds do not match the cost of expenses and medical insurance has been emptied. They have, in many ways, created their own demise. While involved in the moment, they forgot to prepare for the future. The society that had learned to become more self-centered, more self-gratifying had fractured from its own indulgences. It abandoned its interest in preventing the future shock of throw-away items, market glut and subsequent pollution and wanton waste of natural resources. The welfare system was drained, dehumanized and all but dismantled through drug addictive parents and their children. Many who confined their addictions to hard drugs and pharmaceutical pills are suffering the health consequences now and have been unable to work for quite a few years. The last twenty years have seen a steep rise in children born with ADHD, autism, FAS and other mentally handicapped disabilities.

The first wave are hitting at a time when the initial awareness that had sparked the well-educated youth movement to tune in, turn on and drop out has been all but forgotten. Civil rights take a step backward over border skirmishes, racial issues and religious influences. International relations close over bitter accusations of Western interference in domestic affairs. All out war looms closer than it has since the Cuban crisis. Civil unrest runs like electricity through the streets.

This is the legacy the baby boomers have brought us; a population growing old that dominates the work force, the politics and the economics of our countries. A population that has learned to place its own self interests as its first priority. While it brought many baby boomers to success, this self-absorbed addiction is no longer affordable. If the baby boomers are to lead in politics and economics over the next twenty years, then they need to lead with good conscience and consideration for the well being of the youth. They need to insure a viable future. They need to realize their own years are numbered and their retirement will be very much dependent on the choices they are making now. Unless they do, the baby boomers who had started out so hopefully, will fizzle out as the population that destroyed the world.

Karla Fetrow- The first baby boomers turn sixty-five this year. Along with the awareness of endless possibilities, they leave a legacy of self-absorbed interests.