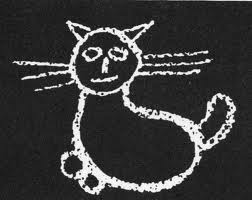 In the first Great Depression, men all over the country left their homes to find work.  As there was no work to be found they traveled a lot hopping freight cars when they could and walking when they couldn’t.  Soup lines were set up across our great nation, and agencies we easily recognize today got their beginning, or at least were set off at a rapid pace.  Even the Salvation Army switched their ways of reaching out during this time.  We all recognize them as a place to get a hot meal and clothes but it was during the depression that they actually added the food to their services.

It was never enough; so while on the road hungry men would look for signs they were welcome.  One of them was the one above, the Kind Woman sign with nothing more than a cat.  This sign said someone lives here that will do all they are able to help and be kindly about it.

Flash forward to December 2010 in the “New” Great Depression. We are beginning to see signs that our welfare and charitable agencies which bloomed decades ago are feeling the stress.   They are reaching the point where they cannot serve the population that comes to them for help and a lot of time it is not for lack of trying.  Sometimes it is because of regulations around food service and assembly and where and when they can serve homeless people or just people who couldn’t make it through the week or month.  Unprepared foods are being increasingly regulated as well.  This year, for the first time ever, I received notice from the canned food organizers at the school district that they could not receive uncanned food of any kind.  That means regardless of whether it was made at home as in the case of bottled food which they have long not accepted, they would not accept pre-packaged food like macaroni and cheese. The ridiculousness of concerning ourselves with whether or not Top Ramen is as safe to eat as a can of green beans is slowing down the process of us getting food to the actual people who need it.

In addition to nanny regulations, we are beginning to see the stress on those who typically give.  Recently, notice went out in a community near  mine that private citizens backed out of supporting a program they had already pledged money to at the last minute.  This particular organization provides safe housing and drug and alcohol treatment for teen parents and their children, as well as life skills.  The gap that was left by this late funding pull out needed to be filled and they were sending desperate pleas to those who had helped before.

Clearly this is not the only instance of funding pull out by private donors.  At the local grocery store, the Salvation Army has resorted to a dog and pony show, complete with musicians and hang-dog clowns to hustle up cash and their little red bucket still remains woefully light.  St. Vincent de Paul’s organizations across the country are reporting that they are out of funding for the homeless and looking at “alternative” ways to serve, although I’m not sure what alternative means unless the volunteers are taking people to their own homes.

At a recent function for a charity that helps bring clean water to countries and areas in need, I asked how their donations and sales were going this year.  This charity runs a store that sells Fair Trade items of which 100% of the proceeds go to the charity.  The organizer reported that it they made about the same as last year.  However some of the vendors there reported that people were shopping differently.  On average they bought goods that were $15 and under.  The vendors themselves couldn’t keep up with this and were resorting to using lower quality goods in production.  Some of these same vendors reported that they were also doing poorly with craft fair organizers consistently asking them to lower the prices so much, they would make less than what it took to produce.

People aren’t feeling good about this, and if Holiday shopping is a good indicator of the economy, it is also a good indicator of where people are at personally.   At any mega store you go to this year you will find people walking about Zombie like trying to fill their lists with the little bit of money they have.  There are fewer smiles out there.   You will see moms trying to decide between $1.00 socks and $12.00 pajamas for their holidays. They are grim. At the checkout stand you will see more necessities in the carts like clothes, toiletries and blankets, than toys and frivolities.  Staring off into space they give up their money and glumly leave.

Recently I served dinner at the Salvation Army.  There is more to cook and bring than ever before and less volunteers doing so, even though the fare usually only cost about $1.00 a serving and volunteers only have to cook for 8-12 people.  In addition there are more families and more of the not-yet homeless showing up.

Overtaxed charities, individuals and more people than ever in need; what can be done?  It’s becoming clear that the government is not going to take care of all this as people have relied on since around the late 60’s.  Indeed even if the government really, really wanted to take care of all this I doubt they would be able to do so effectively.  What is needed is a little planning and a lot of kindness towards one another.

I watched and example of this earlier in the week as an eleven year old I know went to help fill the gap in funding for the teen parent program mentioned above.  This youngster stood at a door and offered up a donation.  The woman collecting it kindly wondered if it wasn’t too much. “No”, the young benefactor explained, “We plan for this all year and we pick a charity at the end of it.  We collect all of our coins instead of spending them”.  With that she turned and skipped off waving behind her head.

The point is we need to be thoughtful, maybe even plan to help others.  We need to be careful with our own budgets so we don’t inadvertently add to the stress as the last minute bail-out donors did. We need to be aware of what is needed and how to provide it.  To that end people  can volunteer in any capacity at any non-profit.  They will learn in a quick hurry how to make things stretch and what real needs verses supposed needs are in their immediate community.

In one way or another we are all going to be affected by this “New” depression.  It may be time to decide how or if we will help each other.  It’s important in times like these not to be overwhelmed.  Of course not one person can do it all.  But one person can do a lot. Planning ahead how you will react when someone knocks at your gate for bread will go a long way.

The time has come I’m afraid for a return to the Kindhearted Women.  The question is what sort of Hobo sign will be on your fence post? 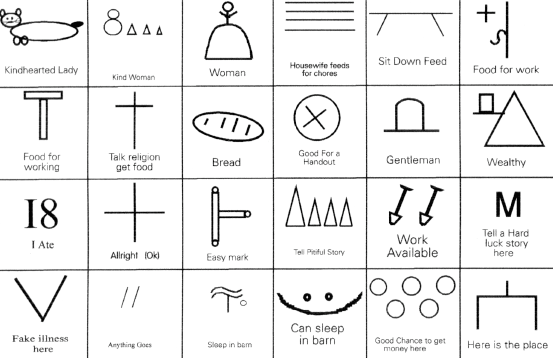 Grainne Rhuad- Hard times are upon us holidays or no, but this time of year brings into glaring focus just how much has changed in a year. What will be your Hobo sign?

Saving The World-One Household At A Time…

The Cynic and the Idealist