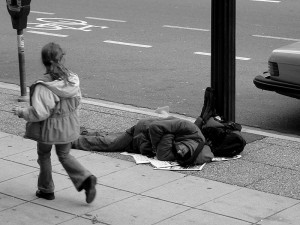 Feeding the Homeless in a Nation of Fear

Most of you know that I volunteer at one of two shelters over Thanksgiving to help out in feeding the homeless. This year was different from all the others.

First, the numbers we served were higher. I confirmed this with the ‘regular’ staff; they made it pretty clear that from last year to this, we’ve seen nearly a 15% increase in homelessness here in River City.

Second, the mood has turned uglier.

“…I lived with my brother until he lost his house. Now, we’re camping…”

“…unemployment ran out, and I wound up….”

“…killed himself. Saw his choice was livin’ in th’ road, or checkin’ himself out…”

Snippets of conversation. I’m supposed to treat everyone with dignity; the way they try to run things is to pretend it’s a restaurant which serves one kind of meal, and treats everyone as a customer. Good help is invisible. Normally, it’s a food-line; done cafeteria-style – over the holidays, we use plates and serve a real dinner. Serve and collect; serve and collect. It gives a person like me an opportunity to learn something while busing dishes.

Next table over, someone started yelling in frustration. Counselors are on duty to deal with this sort of thing, and while it happens every year, these ‘incidents’ flared up about every ten minutes. The counselors try to separate the frustrated from the rest – get them to talk – offer solutions along with sympathy.

The suicide rate has spiked. So have the residents of the shelter from ‘good’ parts of town – people who’ve been caught in the foreclosure mess. These are people who are used to a certain confidence of action. They’re not accustomed to being told when they can eat, sleep, or use the shower.

They’re the ones who volunteer their story – to anyone who’ll listen. Nowadays; they have no one to whom they can talk.

He went on to say that he blamed the government for all of this. His logic was simple, direct, and largely correct: “They’re in charge, ain’t they?” Hunger finally won out over pride – he ate his dinner.

It’s not like Grandma’s. There are no seconds. Everyone is issued a ticket when they walk in; they surrender it in exchange for a plate. No ticket; no food. No one gets to come by and get ‘seconds’.

Lesson: You have to look for them – but the numbers are there. The unemployment rate – the one which the government states is ‘official’ – is 9.6%; you can safely double that if you’re looking for the truth. Homeless? The government owns-up to 500,000, which has been their stock answer for at least two decades now. I know the figure is much higher – and the National Council for the Homeless estimates anywhere from two to five million. Real statistics are hard to come by. Homeless people don’t talk to authorities – it usually means losing what little they’ve been able to scrounge for a campsite.

As the day wore on, I became uneasily-comfortable with an ugly mood. I did a little math in my head.

America has anywhere from ten to twenty-five million unemployed. One in four hundred homes are in some state of foreclosure (we’re on track for over two million by the end of 2010). Combine that with the loss of America’s razor-thin safety-net, and we’re looking at somewhere north of three million new homeless people by the end of 2011.

Most of those will be like the man, above – used to providing for himself, and looking for someone to blame.

These are figures which presage serious civil unrest. I felt it, on Thanksgiving Day; a nation out of work, out of options, and out of hope – and fearful of their own future.

Fear is an odd thing. It’s the best tool of tin-pot governments; the last real weapon of the dictator. Used properly, it can keep people in line.

Once that dog slips its leash, it becomes a Cerberus of hate and anger.

Some additional math. Five million homeless. Figure a third will be suffering from PTSD of one form or another; another third will drink the Kool-Aid and ‘believe’ their lot will improve Real Soon Now – that leaves just north of one and a half million people who are fearful and angry at a government which they blame for their plight.

They’ve also now entered the ranks of the true revolutionaries – because they now have nothing to lose.

“Am I the only one who noticed everyone’s mood today?”, I asked.

“Nope. We were talking about it in the kitchen. The counselors noticed it too.” Small wonder – our yearly ‘customers’ were dealing with frustration born of fear – as well as anger.

Hope? By now, anyone with half a brain knows that hope is a political slogan, used by the 44th President to get himself elected. From now on, real ‘hope and change’ are going to involve doing something – and that’s where the math gets ugly, really fast.

You see, people like me are thin on the ground. We see that there are really two types in the world – those who’ll ‘send good thoughts into the universe’, and those who’ll actually do something. It’s those of us who do something who create hope and change.

At this point, a tidal wave of fear is sweeping the marginalized people of America. In the end, one final statistic is going to matter:   There are, give or take, about a million U.S. military personnel stationed within our borders. Add the half-million police personnel, and the homeless still outnumber them.

Fear is contagious. I felt it last week, while finishing up my stint at the kitchen. For those of us smart enough to do the math, we should all be afraid.