Saving The World-One Household At A Time… 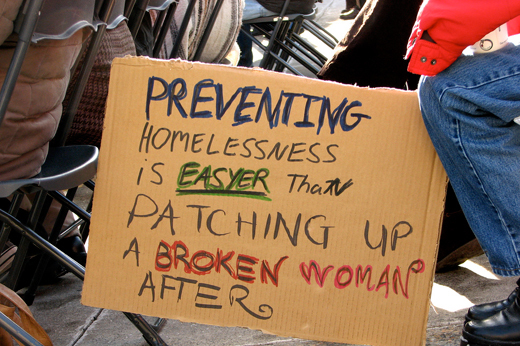 There’s no theme music for the collapse of empire.  If anything, it probably sounds like that old Soviet-era punk band, Brigada-S, or maybe some of Gyorgi Ligeti’s more-stark works, done to the repetitive thump of a scrap-metal shredder.  Our reward for the illogical and insane act of ‘going to war with terror’ was the bankruptcy of our nation and the destruction of at least two generations of Americans.

To the average person, doing anything at all to save someone might seem at first glance like a colossal waste of time, with nearly 20% of the workforce unemployed and homelessness being the fastest-growing ‘lifestyle’ in America.

In truth, Americans have gotten quite good at Giving Up; we gave up on educating our children about fifty years ago; we gave up on the electoral process (it wasn’t ‘cool’ enough); we gave up on the ideas of critical thought and the notions of Jeffersonian egalitarianism-through-knowledge – so much so that now, we have no leaders, no direction – and little if any real hope.

I was once told that I’m no good at giving up – I tend to see things through to the very bitter end, and if the word, ‘failure’ is written and the book is closed, it won’t be happening on my watch.

So, when I learned that an online friend was about to be evicted from her home, I took some action.  Some of you have followed that process.

Here’s why I did it.

First, I’ve known of her situation for quite a long time – some of you actually know this woman; she’s been a developing writer since her early days on Yahoo/360; she now has a book finished and author’s two websites.

She’s been devoted to assisting abused women based on her own background as an abused child.  Her efforts have created a mutual support-group of women with similar backgrounds, and I’ve followed her progress in this area with some interest – because she refuses to be a victim.

Circumstances overtook her when she lost her job a little over a year ago.  Her unemployment insurance has, as with so many other people, run out completely – and while she responded by selling most of what she has to remain in her modest rental home, those resources by their very nature didn’t last long.

Like the dragonfly which, when faced with starvation, will eat its own tail, such measures are at once harsh and finite – one can engage in only so much self-cannibalism; the process has but one end result.  The pumps buy you time; but minutes only.  What’s needed is a lifeboat.

It was at that point I decided to act – because through this whole process, there was one common thread:  She didn’t complain about her situation at all; she simply acknowledged it and continued with her work on behalf of other people.

In the end, it was this woman’s reaction to her own circumstances which caused me to pick her for my own small and modest effort of fund-raising – there were plenty of people in dire circumstances; any of us who’ve bothered to pay attention see similar situations all around us.

So, I set up a donation page, and notified everyone who reads my little corner of the blogosphere.  And, with amounts both large and small, readers and online-friends responded.  Adding like to the sum of like, nearly fifty people donated, not just with the idea of keeping a woman and her children in their home, but to the greater idea that we can truly be the change we want to see in the world.

The real miracle here wasn’t that I decided to do something – it was that the rest of you decided saving a woman’s home was a good thing, also.

Being poor is knowing exactly how much everything costs.

Being poor is hoping the toothache goes away.

Being poor is relying on people who don’t give a damn about you.

Being poor is an overnight shift under florescent lights.

Being poor is your kid’s teacher assuming you don’t have any books in your home.

Being poor is six dollars short on the utility bill and no way to close the gap.

Being poor is crying when you drop the mac and cheese on the floor.

Being poor is knowing you work as hard as anyone, anywhere.

Being poor is people surprised to discover you’re not actually stupid.

Being poor is people surprised to discover you’re not actually lazy.

Being poor is a six-hour wait in an emergency room with a sick child asleep on your lap.

Being poor is knowing you’re being judged.

Being poor is deciding that it’s all right to base a relationship on shelter.

Being poor is a cough that doesn’t go away.

Being poor is knowing where the shelter is.

Being poor is seeing how few options you have.

Being poor is running in place.

Well, you can find out a bit by going here and here – these are places where she writes.  Personally, I’ve never met her.  We share the written word and some common space online, as I do with many of you.  (A warning – some of what she’s written deals with the effects of longtime child-abuse.  She’s not had an easy life.  Frankly, some of the things she’s gone through will – and should – chill you.  I don’t know if I could have suffered what she did and survived.  Many of you will come away with the same conclusion.)

I don’t have to tell you that this nation’s in serious trouble.  In spite of the pontification of the guttersnipes who now run Congress, things aren’t going to get better by returning to the nonsense-as-policy which got us here in the first place.

The real conclusion?  It’s up to us.

I believe that ‘hope’ is a dynamic; created daily by people who give a damn.  I believe that ‘change’ is something we create in the world.  Regardless of your beliefs and motivations, it’s obvious that many of you feel the same.

Thank you for caring for someone you’ve never met.  Thank you for taking the time to ensure that she and her children have a roof over their head this Christmas.

(The original donation site, savemyfriendincalifornia.blogspot.com, has been removed, as we have reached our donation goal.  All of the money was transferred to Ligeia and her family on Wednesday, 12/22.)

W.D. Noble- There’s no theme music for the collapse of empire. If anything, it probably sounds like that old Soviet-era punk band, Brigada-S, or maybe some of Gyorgi Ligeti’s more-stark works, done to the repetitive thump of a scrap-metal shredder.