The Pink Triangle – One More Time 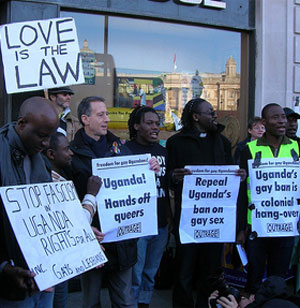 It somehow escaped me for a while. There were issues here. The political carnival had been revved up and the news was consumed with the circus that called itself the Tea Party. All those items with no import had taken my attention. There were juicy tidbits served…. a candidate for Governor who was involved in the greatest fraud ever to be perpetrated against Medicare, and a candidate for Congress who was filmed giving veiled threats of possible violence if the ballot didn’t produced a desired income. There were definitely items that could take and hold out interest. One of the primary purposes of a political campaign, or so it seems to me, is to divert us from those things that are really important, and instead fuel our baser instincts with gossip and innuendo about those candidates we might otherwise favor. And it works. We are diverted even when we believe we are not.

Diverted from what, though? What could be more important than whether Bristol Palin wins the mirror ball trophy on “Dancing With The Stars?” Is there something more important than whether the so-called Mama Grizzly has another 30 seconds of fame? Come on people, come on… help me stay more diverted so I won’t see the number of teen-aged suicides is no longer the flavor of the day. Divert me so I won’t look back to what was almost a head-line of the day some time ago, but never really made it into the consciousness of most Americans, and even in our own community it didn’t resonate with lasting measure.

Uganda! I was reading Time Magazine and found an item that in very few words told of a tabloid that is “outing” gay people in this land where being gay is a criminal offense. The acts of this “news” paper has led to the beating of those named by vigilantes just spoiling for the opportunity to inflict bodily harm on these fags. A judge, in response to a lawsuit filed by an advocacy group, has ordered the tabloid to cease the practice. So the judge, at least temporarily, cut them a break. Whether a higher court will overturn his action will be known in time.

But as interesting as this might be, it was the very last sentence in the two column inch article that caught my attention and has stayed with me. The last sentence tells us that there are some U.S Evangelical organizations that are backing a bill making its way through the Ugandan Parliament that would make homosexuality punishable by death. Like so many, I was under the impression that this bill, that also had the input of a group of Conservative Republican Congressmen, had been watered down, and the death option was taken out of the bill. That seemed to be the focus of what the limited press coverage of the time told us. Incarceration for no crime, just for being who you are seemed cruel enough, but death?

Uganda is not a primitive pagan society. It is not a Muslim nation with laws stemming from someone’s interpretation of the holy books. It is, instead, a member of the Christian Community. It’s government has hosted preachers and priests. It has hosted and paid attention to the ranting of the Religious and Political Right, and these two proponents of the “Religion of Peace and Brotherhood” have lit a fire that will martyr untold numbers of men and women who were born gay. The purveyors of hate-speak have demonized the homosexual in countless ways. Right-wing power hungry United States politicians have assisted the Ugandans in all of the pre-birthing actions for the Bill. They have, to a large degree financed it and even helped write the damn thing.

Time to ask: Where are we in all of this? Have we supported any part of the Conservative Republican Agenda? Do we contribute to any of the hate- spewing Evangelical organizations? If either of these questions rates a “yes” then we are contributing to the potential murder of our own brothers and sisters in another land. We cannot afford to be “Cafeteria Christians” and pick and choose what we accept, while thinking that we can ignore the rest and it will be all right. It won’t be all right… not remotely. Every dollar contributed is divided, and a part of it goes to persecute someone else in the name of Christ, or to the furtherance of politicians who would as soon have a gay man hung as look at him. So we become complicit. Unless we speak out, we become equally guilty. We become a part of it all.

There is no consolation in the fact that others stay silent. Before the odious law is passed, it would seem to me, it is time for those with influence to speak out and use that influence to nip this law before it takes root. We should be hearing from Obama, from the Clintons, from David Cameron, from all Heads of State, and yes, from Pope Benedict whose pronouncements helped make the world safe for anti-gay bigotry. Should this law pass in Uganda and become a part of another persecution, then all the leaders whose influence could have stopped it, all of those who put “trade” ahead of humanity, and all of those who put the furtherance of their brand of Christianity ahead of the lives that will be lost will share in the guilt.

It is time for our own involvement. It is time to speak out. We need to call or write our Congress people to let them know where we stand. If they are of the ilk that is supporting the travesty in Africa, then they need to know that they are being watched and that we will be letting those in our community and those who support Human Rights know of their actions. Remind them that we vote.

We need to tell our Gay Rights Organizations that awards to movie stars are fine as fund raisers and as a way to recognize our allies, but they also need to take a strong public stance and help bring these potential crimes against humanity to the attention of the world. It is a task that should be in the fore-front of their activities. They need to support with not only their words, but also some of the cash contributed for the advancement of gay rights. Words and cold hard cash, bring all possible efforts to bear in an effort to halt this hate and neutralize the influence of the distributors of this poison.

The David: The primary purposes of a political campaign is to divert us from those things that are really important, and instead fuel our baser instincts with gossip and innuendo about those