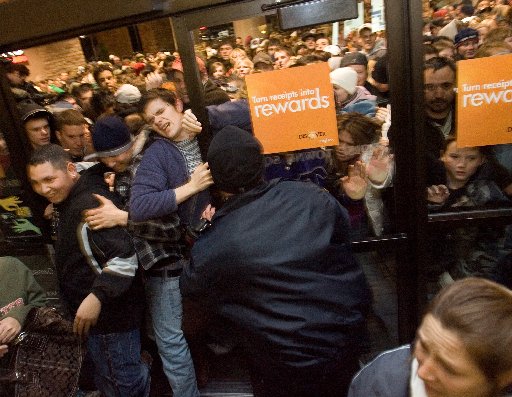 Neither the Grinch nor the Scrooge will ever successfully steal Christmas.  For better or worse, it’s the time when pocketbooks are emptied out the most, when wish lists become demand lists, and our homes become crowded with items that next spring will be cleared out in garage sales.  There is no cure for America’s binge spending, nor frankly, do American businesses , the tourism industry or even the energy companies that receive a huge spike in electrical use during the blinking lights festival, wish to change this policy of extravagant family gatherings.  However, these same conglomerates of commercial enterprise have no qualms about shelving Thanksgiving.

Thanksgiving has taken a bizarre turn over the years.  Wedged between Halloween and Christmas, it’s only real gimmick is, “buy more food”.  When times were affluent, this was enough.  There were enough proceeds from costume buying and candy overdoses to keep cash registers humming while the racks were slowly being pushed aside to make room for waxed fruits, horns of plenty, cut out turkeys and pilgrim shaped candles.

When times were such that people actually placed some sort of meaning into the Thanksgiving celebration, this was enough.  They were times of plenty and it felt good to open up your home to a neighbor living alone, or donate to the poor family down the streets.  Depending on your degree of patriotic sentiment, Thanksgiving was a time to remember a struggling group of settlers sitting down to give thanks for their first bounty on new soil, or a time for the men to saturate themselves in television football while the women competed in the kitchen for the best pumpkin pie.

The problem with Thanksgiving however, is people always have to buy food, so in times when things are not so affluent, the simple buying of food is not enough to satisfy a plunging stock market.  Retailers have always recognized this problem with Thanksgiving.  Long before the month of November is out and all the ballerina and pirate costumes on the clearance rack have been sold, Christmas begins pushing its announcements of pressurized shopping days.  While trying to fill a shopping list of sweet potatoes, stuffing mix, walnuts, fruits and vegetable trays, Christmas stares back at you with candy canes, paper rolls, ornaments and plastic greenery.  The hand hesitates.  Should Thanksgiving be dwindled down a little bit to make more allowance for Christmas?

Businesses have said we should. Thanksgiving has been slowly and carefully nudged aside for that biggest, most spectacular day of all, according to corporate interests; Black Friday.  The day after Thanksgiving has long been held as the most lucrative shopping day of all, but it wasn’t until 2006 that it actually became number one.  An aggressive Internet and retail campaign drove the date to the spotlight.  Before then, the last weekend before Christmas was usually when the most shopping activity was seen.

The significance of this doesn’t fail the eyes of the avid Thanksgiving celebrant.  The grandiose preparations for turduckens and flaming puddings are sifted aside for catering services, the family recipes dwindle in place of instant mixes and ready bake rolls, and grandma looks forward to an evening out in a restaurant instead of adding her expertise to the kitchen.  The competition for best dish is over.  All eyes are on a clock that tells them when they can let go of their thankfulness to reap  the true fruits of their yearly blessings; bargain hunters shopping time.

Black Friday.  Somewhere in my childhood, there was a connotation that Black Friday represented somber, tragic events.  In some Christian religions, the Friday before Easter was sometimes called Black Friday instead of Good Friday as it symbolized the crucifying of their Savior.  When rummaging through modern history, the first American recognition of Black Friday was in 1869 and represented the day when two speculators attempted to corner the gold market.  It was during the reconstruction phase of the Civil War.  The United States had issued a great deal of money based solely on credit, with the populace believing they would be paid back in gold.  Seeking to profit off this, James Fisk and Jay Gould secured a friendship with the U.S. Treasurer, who agreed to tip them off when the government began selling gold.  In the meantime, they began buying as much gold as possible on the free market, artificially raising the price.  When the government began selling gold, the price plummeted, causing a general panic.  Investors scrambled to sell off their holdings.  Many were financially ruined, while Fisk and Gould suffered very little damage.

In 1966, the term resurfaced.  Their Thanksgiving feast over and fortified with a few extra pounds around their middles, holiday observers became suddenly conscious of the count down to wish list checking Christmas.  While day after Thanksgiving shoppers flooded the streets, so did the dark coated law enforcement agents as they attempted to keep the congested crowds moving, untangled traffic jams and coped with the inevitable accidents.  Black Friday, stated the Philadelphia Police Department in 1966, is not a term of endearment to them.  In an article run by the Titusville Herald in the same year, the author states, “Store aisles were jammed. Escalators were nonstop people. It was the first day of the Christmas shopping season and despite the economy, folks here went on a buying spree. … “That’s why the bus drivers and cab drivers call today ‘Black Friday,'” a sales manager at Gimbels said as she watched a traffic cop trying to control a crowd of jaywalkers. “They think in terms of headaches it gives them.”

Financial analysts disagreed with the negative implications.  In the 1980’s a new theory emerged;  that many businesses operate at a loss – in the red – until the day after Thanksgiving. They protested that Black Friday should be seen as a positive influence.  It meant these businesses were now operating in the black; making a profit.

The idea took hold.  Stores began announcing Black Friday specials, enticing shoppers to line up at their doors hours before opening in the hopes of buying the best bargains of the year.  The term Black Friday has warped into an example of an Orwellian nightmare.  The history of Black Friday origins is buried away in the back files of faulty memory, bringing to life only the manifestations of the moment.  The somber has become the cheerful click of cash registers and the negative has become the positive.  Once inside the stores, a frenzy begins.  The big cash item draws are limited, and people are often injured or trampled in their attempts to grab the best bargains.  On Friday, November 28, 2008, a Walmarts clerk was trampled to death by shoppers who broke through a window just minutes before the store was to open.  A pregnant woman was hospitalized and lost her baby through a miscarriage.  That same day, two people were shot and killed in a Toys R Us store in Palm Desert, California during an argument.

This year, strategic shoppers are willing to forfeit their Thanksgiving dinners to sit out the wait in front of their favorite stores for the grand Black Friday opening.  The thankfulness is prolonged for the anticipation of greater thanks for items purchased at a fraction of their original cost at risk of life or limb, and the sacrifice of a holiday that was meant to symbolize shared appreciation of the bounties bestowed by hard work and mutual cooperation.

It’s probably no co-incidence that the frenzy of Black Friday shopping has risen as the economy has slumped.  A desperation has taken hold to guild the traditionally free spending Christmas days with sales slashed items and economically comfortable limited editions.  There is a bright spot.  This year, some stores have announced that online shoppers can place in their bids for those glorious bargains on Thanksgiving Day.  While this may not keep the women in the kitchen, basting turkeys, it will keep them at home, hopefully to appear occasionally from their computers to see if the bakery service has arrived with their pies yet.  It will also be a more enjoyable experience for the dads who have to battle with their kids each year as to what should be watched by the family on television.  All they have to do is give the kids their Christmas spending allotment money in an Internet gift card.  The dads will be relieved of duty from taking their kids shopping for the rest of the month, and the kids will be busy cyber bargaining as the men spend their Thanksgiving comfortably watching the football games.

It says something about us as a society.  Squeezed between two holidays with origins in pagan rituals that have been celebrated with enthusiasm because they symbolized fun, the hectic pace of keeping up with the obligatory costumes, candies and gifts has diminished the importance of Thanksgiving, a custom whose roots lay in our first colonial ancestors and the intense gratification they felt for their survival.  As we watch our clocks and schedule our plans, we put aside our reasons for being thankful.  We list only our failures; the housing crisis, inadequate budgets, health issues; leaving out the bonding of friends and family, the small victories, the random acts of kindness that impacted our lives.  As a community, both globally and nationally, we are going through turbulent times.  Accusations, distrust, misunderstandings and rumors dominate the air waves.  Our situation is not unique.  The crisis destabilizing economies today, occurred in the past, with similar tactics to keep sales bolstered.  What is unique is the slow dissolution of a day that was once put aside as a period of national unity in thankfulness.  Black Friday, as the most important shopping day of the year has overtaken the significance of that early colonial celebration.  When given the choice between communal gathering or buying fabulous items at cut rate prices, America chooses to give up Thanksgiving.  It’s difficult in these hectic times when every hour is valuable, to take a pause and reappraise our priorities, but whether we wish to cling to old colonialist ties or not, we should always put one day a  year aside to be thankful.

Karla Fetrow: Thanksgiving has been slowly and carefully nudged aside for the most spectacular day of all, according to corporate interests; Black Friday